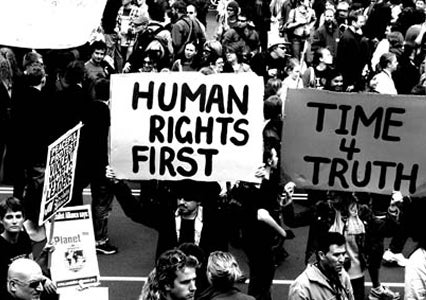 Amnesty International’s latest report says that regressive policies and/or hateful rhetoric by the presidents of the United States, Russia, China, Venezuela, Philippines, Myanmar, Egypt, among others, are undermining the basic rights of millions of world citizens.

Embodied in the 1948 Universal Declaration of Human Rights, the American Declaration of Independence, the French Declaration, 1987 Philippine Constitution and other international declarations is the universal truth that certain rights are fundamental to human nature.

Was it Thomas Jefferson (1743-1826), author of the American Declaration of Independence, who once confirmed: “We hold these truths to be self-evident: that all men (and women) are created equal and endowed by their Creator with certain inalienable rights?”

If dignity and rights are God-endowed, so fundamental and inalienable, why do our global leaders fail to champion them? Was it Martin Luther King Jr. (1929-1968) who said that “nothing in all the world is more dangerous than sincere ignorance and conscientious stupidity?”

But how can an accomplished person refuse to understand that human dignity and human rights are divine gifts from conception? That they are inherent, innate, and intrinsic in the very nature of every citizen?

A senior high school student ought to know that human rights are inviolable, derived from our human nature, and because of this are universal and permanent. Basic human rights therefore are not limited to a particular jurisdiction; thus, the world has the Universal Declaration of Human Rights.

The Universal Declaration of Human Rights, adopted in 1948 by the UN General Assembly, aims to champion every person’s right to life, work, freedom of religion, freedom of association, emigration, press, and expression, freedom from torture, slavery, discrimination, etc.

Now the world comes to its senses. The 60-year old Universal Declaration of Human Rights is more a dream than reality. Violations are committed by no less than those who took an oath to promote them.

Donald Trump’s controversial travel ban from six Muslim-majority countries is obviously a violation of the basic freedom from discrimination and right to immigration and migration. But he doesn’t see it that way.

Dissenters are silenced, too often eternally, and countless women and children are marginalized in numerous ways, the press continues to be suppressed in many countries, and innocent people are arbitrarily arrested or worse “mistakenly” killed.

Very recently, the “Worldwide Threat Assessment” published by the US Director of National Intelligence has tagged the Philippine President Duterte as a threat to democracy and human rights in Southeast Asia, mentioning EJKs in his war on drugs and the suppression of the press, among other violations.

Among the most fundamental human rights, the right to life is a top priority – and the rationale is valid and unassailable – for without the right to life no one, just no one, can enjoy the other rights. How do we practice the basic rights to education, full employment and adequate compensation, to emigrate, to health benefits and social security, when we are dead?

Certain human rights are non-derogable, inalienable, or notstandsfest (in German), which means that under no circumstances can such rights be limited or assailed. And the top priority is the right to life, the most fundamental of all human rights.

My limited mind cannot simply fathom how on Earth some heads of state can fail to know this? “Eeeeets a puzzlement!” Or is it an instance of “sincere ignorance and conscientious stupidity” (Martin Luther King Jr)? In any case, it’s very dangerous.