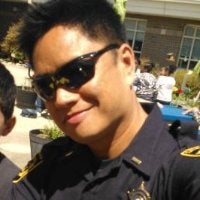 Captains are among the highest ranking of the 430 sworn officers of the sheriff’s office, and promotions are reportedly very competitive.

With Culanding’s appointment, half of the sheriff’s eight captains are now minorities (two blacks, one Hispanic and Culanding; two of the eight are women).

Culanding will be responsible for the courts division, overseeing courthouse operations, transportation of inmates and civil processing.

“I always envisioned being a leader,” Culanding told Pilotonline.com. “I wanted to be in a position where I could make a difference.”

Culanding, whose parents immigrated from the Philippines, grew up in Virginia Beach. His father enlisted as a serviceman and his mother worked as a nurse. Culanding has a brother in the US Navy and another works as a firefighter. He and his wife have three children. They lost a twin son shortly after the child’s birth, and the surviving one is autistic.

Culanding graduated from Green Run High School and earned a bachelor’s degree in psychology from Norfolk State University. He was a mental-health technician before joining the sheriff’s office. His experience working in that field has been especially helpful in his dealings with inmates who have mental-health issues, he said.

In addition to his day job, Culanding volunteers and is a co-founder of the Filipino American Law Enforcement Association of Virginia. His favorite volunteer duties are with the Special Olympics and at Seatack Elementary School, where he serves as a mentor.