Is respect for Asian women gone?

Is respect for Asian women gone? 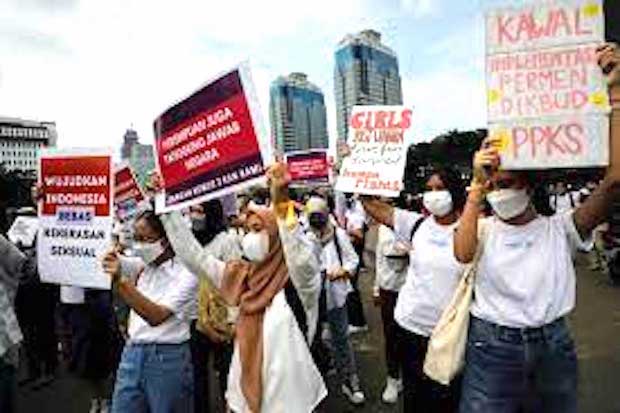 Activists carrying placards take part in a rally to support women’s rights calling for gender equality and to protest against gender discrimination, during the International Women’s Day outside the National Monument (Monas) complex in Jakarta, Indonesia, March 8, 2022. REUTERS/Willy Kurniawan/File Photo

Gallup Poll comes out every year with the people’s perceptions of the way women are treated. In 2019, Asia ranked the highest in the survey, with 76 percent saying women were highly respected.

But a few weeks ago, the world saw in a viral video an unprovoked attack on four innocent women at a barbecue restaurant in Tangshan, supposedly a peaceful city east of Beijing, China.

Nine men brutally assaulted female customers. Captured on CCTV, the men pulled one woman by her hair, hitting her with chairs and repeatedly kicking her in the head. The next thing we saw was a photo that showed her lying on a stretcher, covered in blood, and her face disfigured.

A few days ago, a young woman from Tai’an in Shandong Province, also in China, named Liu Tingting shared online a video of her boyfriend severely beating her, who then was 7 months pregnant. All of a sudden, our romantic picture of Asian women, highly respected and almost revered, banished into thin air.

Actual scenes of brutality against women in Papua New Guinea (PNG) that I witnessed moons ago flashed through my mind. I was there as a visiting professor at the PNG University in Port Moresby.

Among the Highlanders, the marital relationship is generally characterized by distrust and antipathy, with the husband approaching the wife – and not vice versa – only and principally for sexual gratification. In the Melanesian culture, the husband always has the complete right of disposal over his wife and the unspoken “right to beat his wife.”

Camilo and Angela were native household caretakers in the university compound. One morning, I heard Camilo yelling at his pregnant wife, and Angela was shrieking back. Suddenly, there was a commotion and I saw Camilo knife his wife in the back. I shouted at the top of my voice: “Camilo, stop it!”

I jumped from where I was and raced to go between them. I pushed Camilo into their quarter, and collected all the axes and knives. How could a man be so cruel to his pregnant wife? I asked myself several times, thinking, maybe, it was an isolated case. But it was not. Domestic violence in Melanesia was commonplace.

It dawned on me how a pregnant wife, in contrast, was treated back home in the Philippines and in other Southeast Asian neighbors. During pregnancy, at least, the woman was treated like a queen whose every word was an “imperial” command to the husband. Like a singular blossoming flower in the desert, she was treated with utmost care, attention, and sensitivity.

William Cameron Forbes, Governor-General of the Philippines (1909- 1913), a Protestant, described as “most impressive” the high place the Filipino woman occupied in society. Wrote Forbes in 1928:

“By those who believe that the position of women is a fair index of a people’s degree of civilization, the Filipino must be rated high, as the women of the Philippine Islands more than almost any other Oriental people hold a position of responsibility in the management of the home and even in the business of the husband.”

Unfortunately, the new millennium sees this “most impressive” high place occupied by Filipino women nearly gone. Women and girls in this predominantly Catholic nation, as in Southeast Asian neighbors, have reported having experienced physical, emotional, or domestic violence, a.k.a. violence against women (VAW).

More than half of all women and girls have suffered some forms of VAW in Afghanistan, Bangladesh, China, and Timor-Leste. In addition to physical violence perpetrated by non-partners and domestic violence, VAW now takes a variety of ugly shapes, such as human trafficking, cyberviolence, marital rape, and slavery for sexual exploitation.

Take, for instance, the 2019 United Nations report on VAW, which revealed that “in East Asia and the Pacific, women and girls make up 77 percent of trafficked persons and the most frequently detected form of exploitation among trafficked persons in this region is sexual exploitation.” That’s a lot of our women abused!

In Thailand, the majority of detected victims of human trafficking in 2014 were underage girls, mostly for the purpose of forced marriages. One half of all 600 million child brides have been married before reaching the age of 18 are from South Asia.

VAW and gender-based violence are now two of the deadliest forms of violence in Asia and, worst of all, they are dramatically overlooked by national governments. India had tens of thousands of dowry-related deaths, as Asia Foundation has reported in 2020, which was 10 times more than the combined fatalities of the Northeast India insurgencies and Kashmir conflict during the same period of time.

The Tangshan victims of VAW and their families have remained silent, and their silence was deafening, given the withdrawal of public trust in a government that characteristically covers up a flaw in its system.

We don’t like it when VAW increases in our midst and the respect for women appears to diminish. What can we do then?

Jose Mario Bautista Maximiano is the author of ‘The Signs of the Times and the Social Doctrine of the church’ (Salesiana, 1991) and ‘The Church can Handle the Truth’ (Claretian, 2017).