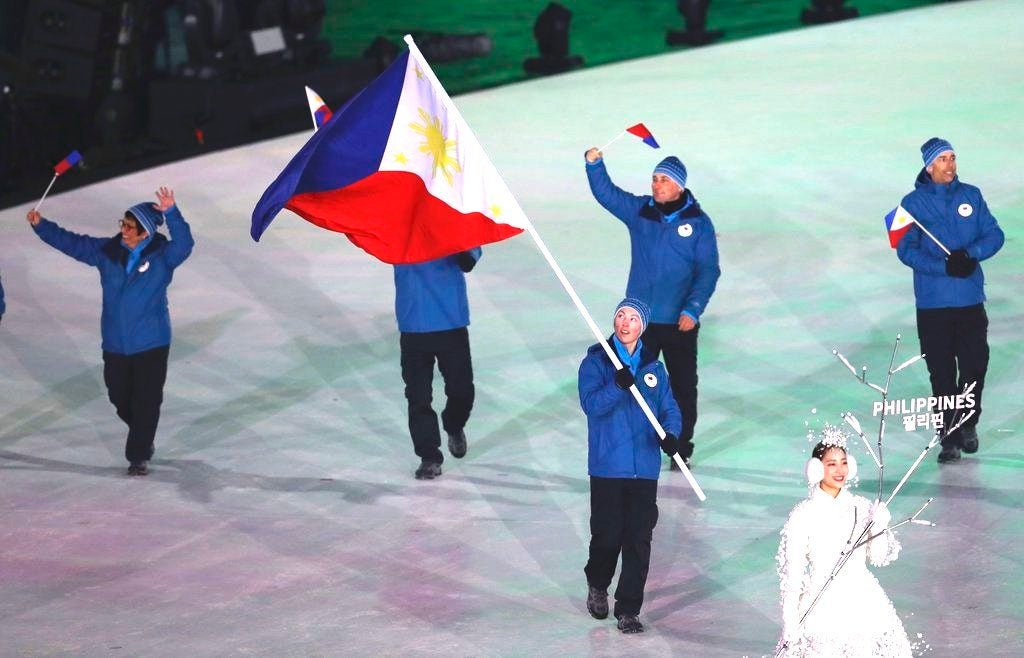 Asa Miller carries the flag of Philippines during the opening ceremony of the 2018 Winter Olympics in Pyeongchang, South Korea, Friday, Feb. 9, 2018. AP PHOTO

American Filipinos may not vote as much as they should in Philippine elections like a dual citizen should.

But let’s face it, when it came to showing up for the big Winter Olympic party in South Korea, the Philippines showed up because of two duals.

That ought to look good for his college applications next year.

I kept wondering why Philippine President Rodrigo Duterte couldn’t place himself on the Philippine team in the Biathlon, considering his renowned shooting skills. Just try to stop him.

The loosened rules, especially those allowing dual citizens through birth and immigration to compete, was actually a refreshing thing about these games.

Of course, the loose rules meant you really couldn’t tell “friend” from “foe” in the athletic sense. And isn’t that supposed to be the Olympic spirit?

I found how you really couldn’t tell a person’s nationality or ethnicity at these games without a scorecard, passport, or blood test.

That’s for certain when it came to drugs.

The official name for Putin’s team was The Olympic Athletes of Russia. I added an N.O.D., for “Not on Drugs.” It was quite a statement at the games–especially when a Russian curler was disqualified for testing positive during the competition itself.

Watching them throughout, they could have easily been Russian immigrants to the U.S. They were mostly all white. In these Olympics, you could be an American with dual citizenship and race for the country of your family’s heritage.

So besides Miller and Martinez for the Philippines, Americans were competing on other countries’ teams.

Sort of like Trump not acting on Russian meddling in our elections as if he’s on Team Russia?

Can I get an “America First?”

For me, it’s these little things that will mark the 2018 Olympic games.

Images of VP Mike Pence in close proximity to the sister of Kim Jong Un. The openly gay American skater Adam Rippon juxtaposed with the anti-gay Pence. Then there was the North Korean cheerleading squad. And the combined Korean team playing on the same hockey team.

The North Koreans got what they wanted out of these games. But who knows if its semi-soft diplomacy will thwart or hasten the start of a major war.

And then there was this little colonial act by NBC.

After Sunday’s closing ceremony, people will leave Pyeongchang, South Korea, and it will return to what it was called before it got Olympic ringed and played by NBC.

The city will be known once again by its pre-colonial pronunciation.

That would not be Pyeong-CHANG, but rather the correct Korean pronunciation “Pyeong-Chahng.”

As my fellow Asian American Journalists Association members put out in a video guide, it’s more “Ch-AHNG,” with a definite “AH,” sound, the kind you’d make to a doctor if you wanted him to correct your pronunciation.

Definitely, it’s not the hard sound “CHANG,” as in “you rang?”

For the last two weeks, we’ve been “chang”-ed to death, which is no big deal, unless you are concerned with the truth, accuracy, and authenticity. You know, the stuff journalists should care about.

Perhaps that’s not as bad as getting North and South Korea confused. One is the country that makes your Smart TV and Android devices.

The other is the home of Trump’s “Little Rocket Man.”

But pronunciation is an entirely different matter, and it’s a big deal when it comes to a broadcast medium.

It’s like being in a concert and hearing the same bad note repeated over and over whenever people on NBC said exactly where they were—which, of course, was in a place no one in Korea, North or South, had ever heard of.

It was just a clinker. More than a display of ignorance, it was an insistence on the wrong pronunciation. An act of defiance.

It was back in November when Sports Business Journal first pointed out the inconsistency of NBC’s pronunciation, noting that host Matt Lauer could go from Pyeong-“chung” (Not enough “ah,” so just 85 percent correct) to Pyeong-“chang,” as in bang (positively incorrect), almost in the same breath.

Of course, that’s not what got Lauer fired.

The Business Journal’s Ben Fisher asked NBC, which essentially showed how much it cared about accuracy.

Its view came down to this: Screw authenticity. To hell with truth, NBC bought the rights, and they can bastardize the games whatever way they want. Even mispronouncing the name of the Olympic site.

Mark Lazarus, chairman of NBC Broadcasting and Sports, said NBC’s official pronunciation was “chang” as in “bang” and that was that.

It’s not a matter of being PC. Pyeongchang isn’t even capitalized in the middle.

But this is what you get when the rights are bought and sold to the highest bidder. The Olympic spirit comes filtered through a colonial tongue that chang-bangs us relentlessly.

You wouldn’t call a bronze the “brown medal,” would you?

Of course, the Philippines understands NBC.

It was Olympic Colonial Mentality at the Pyeongchang games.

Emil Guillermo,an award-winning journalist and commentator, is an Inquirer.net columnist based in North America.

Listen to his podcasts at https://directory.libsyn.com/shows/view/id/emilamokstakeout