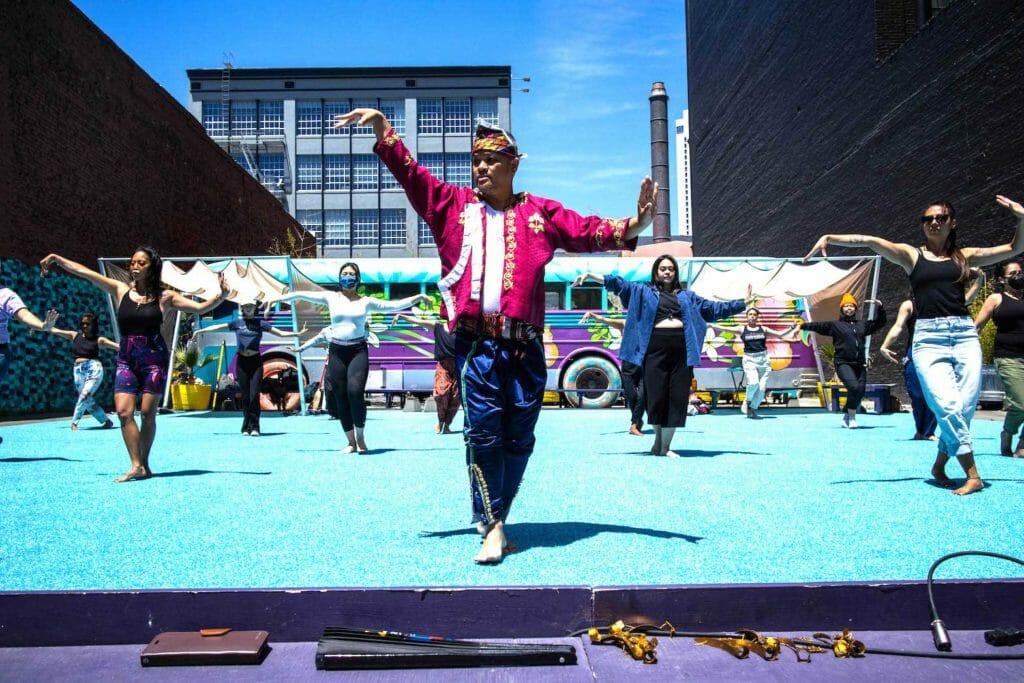 Pangalay Circle, a monthly series of Pangalay dance workshops and Many Styles, a Filipino Martial Arts (FMA) workshop series, is a project led by dancer and artist Kim Requesto and features a selection of practitioners as instructors on the different methods of dancing or Pangalay.

The Many Styles FMA workshop is led by Gregory Manalo of The Rooted school of Filipino Martial Arts and Culture. Manalo is a practitioner and teacher of Visayan Style Corto Kadena Larga Mano Eskrima (VSCK) and is the self-ascribed curator of the FMA workshops.

Requesto, who will also be teaching a workshop, wanted to provide an inclusive space for beginners and for those who are already familiar with Pangalay.

The Pangalay Circle workshops are offered both in-person and online. Requesto wants to connect artists and practitioners from different dance companies in California and the Philippines to grow a bigger community and the diaspora’s interest in Pangalay.”

Pangalay, or a gift offering, is a pre-colonial art form from the Sulu Archipelago that “has the richest movement vocabulary” among Philippine indigenous dances and is “the closest to a classical form,” according Pangalay Dance Master Ligaya Fernando-Amilbangsa.

Pangalay is an individual art form, says de Guzman, “but it has been guided by culture and legacy.” He adds that it is “a very meditative form of dance that’s very internal and expresses your emotion through the movements of your hands, your gestures, the posture of your body.”

Tioseco says, “It’s just pure movement in a very intimate way. It’s a very interesting balance that counters the western concept and idea of what it is to be performing and dancing.”

The Pangalay Circle workshop instructors share the experience of first learning Pangalay in the diaspora through the interpretative works of National Artist for Dance, Ramon Obusan, and the Bayanihan Philippine Folk Dance Company/.

“The repertoire that we were learning, based on Ramon Obusan and Bayanihan, were adapted for the stage and there is a heavy artistic approach to the execution of these dances,” says Tioseco.

Pangalay through folk dance interpretations is a common and popular entry point to the art form, but after dancing these versions for years, they all came to the realization that they were only scratching the surface.

“There was something that I felt was lacking. I knew there was more to what I was learning,” says de Guzman.

Then came their shared paradigm-shift when they first separately encounteredAmilbangsa’s book on Pangalay.

“I thought to myself, this is unlike anything I have ever learned,” says de Guzman.

“I lived with that book, getting to know more about, not just the art form, but also about the people and their traditions,” says Solano.

After reading Amilbangsa’s book when he was 16, de Guzman “threw it out to the universe” that one day he would meet her. Years later, de Guzman was able to make contact with Amilbangsa who, serendipitously, lived down the street from de Guzman’s family home in Marikina.

Being the first person from America to seek out Amilbangsa in 2004, de Guzman trained and performed with her on and off for a decade. He carries on Amilbangsa’s lineage and has her special permission to share her methodology.

“You have to see what Pangalay from the traditional standpoint looks like, the details and the stories behind the hands, the gestures, before you start to create and imagine things, because there is a lineage, there is an aesthetic,” says de Guzman.

Tioseco had a workshop with Amilbangsa in 2013 in which her “world was shaken.” She learned that “you do not really need music” when you’re dancing Pangalay.

“It really comes to just the breath,” says Tioseco. You’re breathing, inhaling and exhaling. You can create a sequence of movements in one breath.”

Solano had his workshop with Amilbangsa in August 2011. Within that month, he went to the Kadayawan Festival in Davao and met Ta’u Sug culture bearer Sitti Obeso who became his mentor and whose form of Pangalay he practices and teaches.

Solano aims to create awareness about Pangalay as an art form based on the teachings of Obeso.

He advocates for “cultural responsibility” from artists and practitioners in the diaspora by acknowledging “the people and their traditions” when presenting, not just Pangalay, but all indigenous art forms. Connecting directly with indigenous culture bearers “creates support in their livelihood” and “helps in the preservation of their culture.”

Like the islands that make up the Philippines, FMA is varied and has many styles. According to Manalo, “FMA did not evolve and grow until it got to the States.” He points to tribalism as the reason. They had kept their styles and methods to themselves so as not to give away this knowledge to potential enemies. But it all changed when the first wave of Filipino immigrants came to the United States.

“They realized they were in this together. They had to band together against oppressive work conditions and against the general population of folks who are racists,” says Manalo.

Manalo with his fellow FMA practitioners and their different schools are taking this departure from “tribalism” a step further through this Many Styles, FMA workshop series. “We’re trying to change the mentality of ‘my Kung Fu is better than yours’ to ‘hey, we’re a part of this community, let’s help build each other up now,’” says Manalo. He started The Rooted School because of an “overwhelming feeling of indebtedness and I feel like I need to give back and present and maintain his art.”

Manalo, a salsa dancer, says Umpad, his mentor, was a ballroom dancer. “Bruce Lee also happens to be a champion cha-cha dancer. So there’s a correlation between dance and martial artists and both informing both disciplines.”

The Pangalay and FMA practitioners and workshop instructors attest to the benefits of these art forms that could also be had by members of the community.

For Tioseco, an openly identifying transgender woman, it “really solidified my identity as a trans Filipino American. When you dwell heavy on the context and you start to understand the culture behind the movement and dances, it reinforces who you are.”

She adds that it will be “a safe space and platform for all to learn.” Especially for “individuals who feel like there is no space for them because they don’t identify as either male or female.”

While “Philippine folk dance is binary,” she says that this concept doesn’t apply to Pangalay. “There are no labels, no barriers to hinder. It’s more of taking a chance and the opportunity for you to make your first step.” 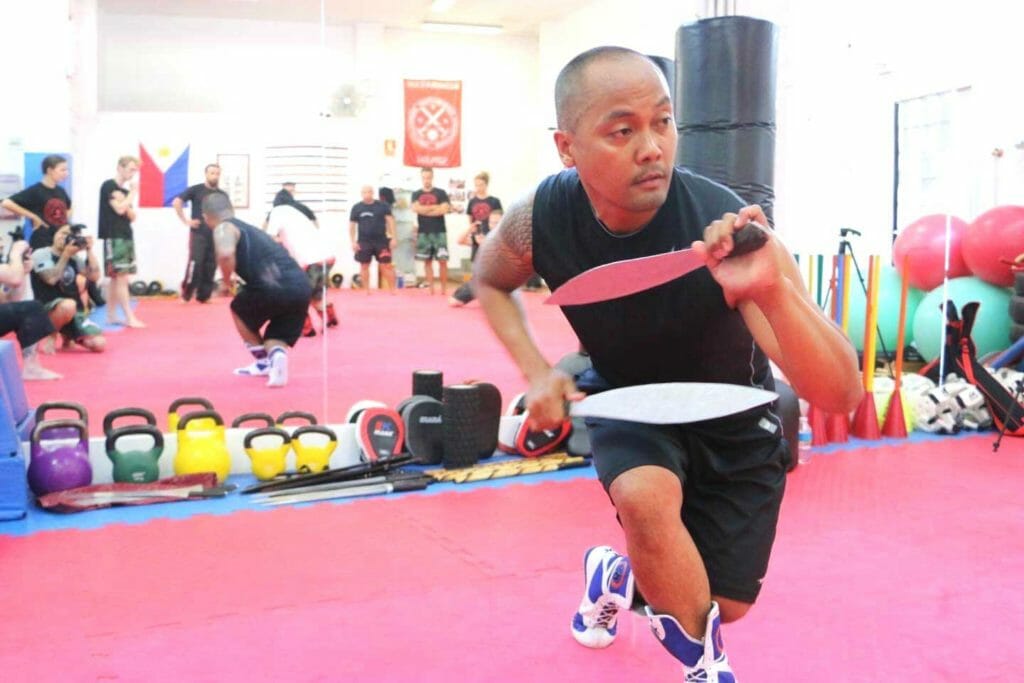 Practicing Pangalay alone at night under a full moon is what de Guzman enjoys the most.

“I will dance it in my backyard and I will feel at peace. I dance for myself, I dance in peace, and I feel complete joy.”

Manalo would like people see that “practicing FMA directly connects you to this conduit of history and our ancestry. To do the same moves, to swing the same swords as they were, we’re evoking their spirit, we’re keeping them alive.”

“Pangalay really helped to seal the deal of my personal way of decolonizing my mind,” says de Guzman. “I had gone to a dance school and I’ve seen the great ballet dancers, the modern dancers, and I had wanted to be them. But when I found Pangalay, I said, ‘this is my own.’

“If we can imagine that we are continuing this tapestry that is Filipino culture by participating in these kinds of cultural practices, it’s a very meaningful thing if you identify with it,” says Manalo. “That’s why I encourage people to do it and view it in that way, not only for self but for our ancestors, our children, and our grandchildren.”