Canadian police shot dead two men and six officers were wounded during a gunfight at a bank in British Columbia on Tuesday, and nearby homes were evacuated after the discovery of a possible explosive device, police said.

Emergency response team members arrived on the scene at the Bank of Montreal in Saanich, on Vancouver Island, near the border with the U.S. state of Washington, around 11 a.m. (1800 GMT), law enforcement said.

“This remains an ongoing police incident with a heavy police presence in the area,” Saanich police said on their website. 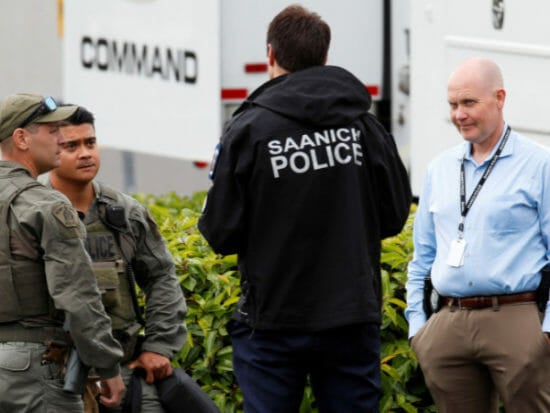 Police officers gather after two armed men entering a bank were killed in a shootout with the police in Saanich, British Columbia, Canada June 28, 2022. REUTERS/Kevin Light

“Homes and businesses in close proximity to the scene of the incident have been evacuated due to the presence of a potential explosive device in a vehicle associated with the suspects.”

Later, police said they were lifting a shelter-in-place order but that the block near the bank remained closed over the potential bomb.

Six officers were taken to hospital with gunshot wounds, some of whom would soon be released but others “sustained very serious injuries and have been taken into surgery,” Duthie said. 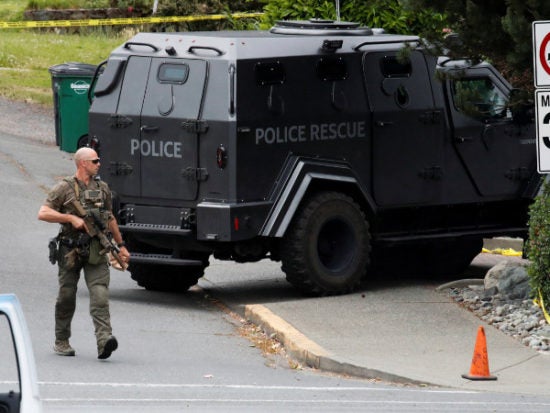 A police officer looks on after two armed men entering a bank were killed in a shootout with the police in Saanich, British Columbia, Canada June 28, 2022. REUTERS/Kevin Light

Video posted on social media showed police officers and a police dog in pursuit on foot with the sound of gunshots blazing. Police have asked any witnesses to submit video evidence, CBC News reported.

“From what I know about that chaotic, tragic, dynamic, violent scene, the fact that no citizens were injured in any way is truly amazing,” Duthie said.

Prime Minister Justin Trudeau said on Twitter he was “shocked and saddened” by the violence.

“I’m keeping the police officers who were injured in today’s shooting – and their colleagues who also rushed towards danger to keep people safe – in my thoughts,” Trudeau said.