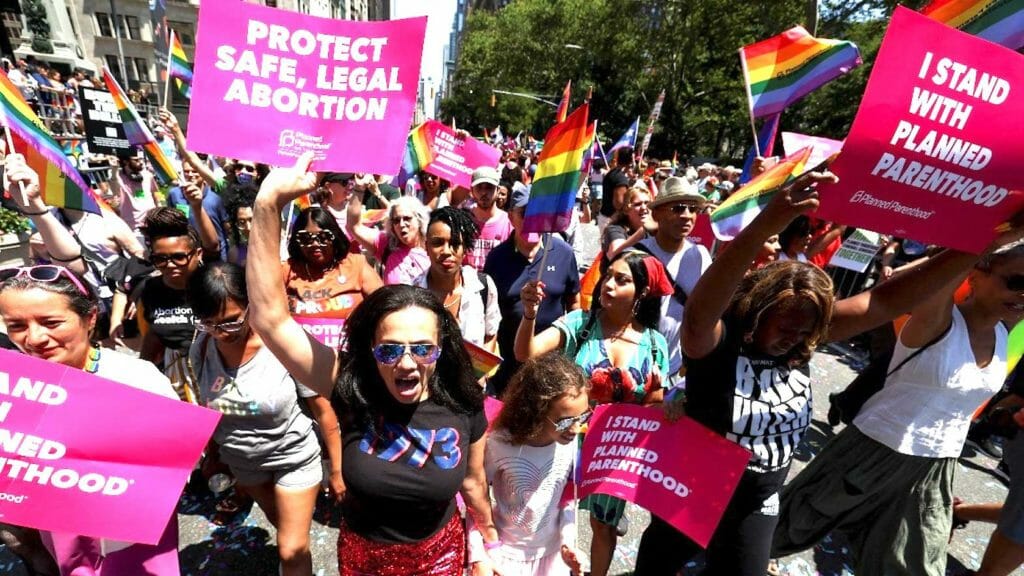 People attending Pride celebrations hosted by LGBTQ+ communities across the United States this weekend expressed outrage at the Supreme Court’s decision to overturn the constitutional right to abortion and a wave of anti-transgender legislation. REUTERS

As an American Filipinos, I know we have a strange nostalgia  for ideals like freedom and independence. Even as we have less and less of it, we’ll party.

So it was a bit odd that there was a celebration in San Francisco for the 1898 declaration of independence from Spain last Sunday. The same day most Filipinos show their enduring loyalty to the Catholic Church.

Those chains are still showing in the Philippines and Filipino communities here. And that brings us to the true complications this weekend for Filipinos.

First, the declared independence from Spain is not to be conflated with the independence Filipinos were granted from the U.S. after World War II.

But to celebrate any independence on this past particular weekend showed that ironic rust  truly is Filipino brown.

For this is the weekend America actually took a step toward being more like the Philippines, with its Spanish theocratic hangover.

In the Philippines since 1987, abortion is in the Constitution, Article II, Section 12,  as if it were written in by Clarence Thomas himself.

“The State recognizes the sanctity of family life and shall protect and strengthen the family as a basic autonomous social institution. It shall equally protect the life of the mother and the life of the unborn from conception. The natural and primary right and duty of parents in the rearing of the youth for civic efficiency and the development of moral character shall receive the support of the Government.”

Make no mistake. Abortion is illegal with mandatory prison time for any woman who gets an abortion, and any person who helps her. But that doesn’t stop any one from getting an abortion.

In the Philippines, 37 percent of all births are unwanted, and 54 percent are unintended. And four out of five abortions are for economic reasons, according to the Philippines Orphanage Foundation.

And that means illegal abortions are common place in unsafe abortions putting women and babies at risk to back alley dealers who are all to willing to “help.”

Since illegal abortions aren’t reported, it’s hard to get a number. But the World Heatlh Organization has placed the number as high as 800,000.

That’s what happens to a small country like the Philippines where there are no constitutional rights to an abortion.

Maybe the Philippines Constitution will be a model for your state in the U.S.A.? The U.S. Supreme Court has paved the way.

When the decision came down

I saw a crying Asian American woman on the TV news. She reminded me of my daughters.

What is worse? To kill abortion in America, or to kill our sense of freedom and American democracy?

In Friday’s rulings, the Supreme Court of the United States managed to do both. The court declared itself a political animal and overturned Roe v. Wade and the constitutional right women have had for nearly 50 years to choose abortion.

When the ruling came down, I was considering a column on the latest Jan. 6 Committee hearings that revealed how the former president tried to get his legal arm, the Justice Department, to aid him in stealing the 2020 election. That came perilously close to crossing the line from democracy to autocracy.

But Friday’s Supreme Court ruling has the same impact of the autocracy we fear.

In one of the most personal and intimate matters a person can experience–childbirth–the government in many states has the last word.

The high court is saying you’re having the baby.

Even President Joe Biden can do nothing to reverse the ruling by executive order and called the court’s decision “a tragic error.” So now the chaos begins.

For Asian American Filipina women living in states that have protected abortion through viability, the right to choose still exists in places like California, Washington, Oregon, Nevada, Pennsylvania, New York, New Jersey, and Massachusetts, among others.

But other states, like Missouri, have laws set to make abortion illegal as soon as Roe is overturned. And others have already restricted abortion before viability.

If you want an abortion, you may have to drive some place hours away. If you are able and can afford to do it.

The real impact is clear. A woman’s choice has been compromised. If you wanted an abortion on Thursday, in many states it was no longer available on Friday.

The court’s actions come in two separate decisions, the first affirmed by a 6-3 vote a Mississippi law that bans abortion at 15 weeks when some mothers don’t even know they’re pregnant.

The second vote on abolishing the right to abortion established by Roe in 1973 was overturned 5-4, giving Chief Justice Roberts a way to join the dissenting liberals (Breyer, Kagan, Sotomayor).

It likely was an attempt for Roberts to look slightly less radical than the ultra-conservative disruptors (Thomas, Alito, Kavanaugh, Gorsuch, Barrett). But the damage is done.

The logic of the rulings is still from that Justice Alito’s leaked draft, which stays true to the extreme originalist view that questions how abortion can be guaranteed by the Constitution when the word isn’t in the Constitution.

Legally, you can argue that. But since 1973 when Roe was decided, that argument lost to issues of privacy and personal choice, matters upheld not by the word “abortion” in our Constitution, but by the presence of the 14th Amendment, which reads in part: “No state shall make or enforce any law which shall abridge the privileges or immunities of citizens of the United States; nor shall any state deprive any person of life, liberty, or property, without due process of law; nor deny to any person within its jurisdiction the equal protection of the laws.”

As President Biden said Friday morning to the nation, Roe v. Wade was the law of the land for the lifetime of many Americans today.

Roe was a 7-2 decision written by a justice appointed by Nixon, and for nearly five decades was upheld by a majority of judges appointed by mostly Republican presidents.

And now it’s undone by three Trump appointees, two of whom appear to have lied under oath in confirmation hearings when they said they respected precedent, specifically when it came to decades-long rulings like Roe.

Little lies? Add it to the Big Lie, and if you thought our democracy was hanging by some dental floss, it’s even worse today.

But now there are real consequences of women’s lives, their health and safety. California, where the majority of Asian Americans live, should be fine, but what of those states with big AAPI communities like Texas?

What about those with restricted means who may have to travel to seek an abortion? And what about states that may seek to criminalize those seeking an abortion or even those who aid them?

And then since the court has other issues on the agenda, what are we to make of Justice Thomas’ concurring opinion where he boldly states “[We] should reconsider all of the Court’s substantive due process precedents.” Specifically, he means laws on contraception, LGBTQ equality, and same-sex marriage.

It’s a lifetime appointment, after all. Maybe he wants to overturn every bit of social justice good that has happened in a lifetime.

What’s the way out? There has been talk about making the court bigger. It used to be called “packing the court.” But in truth, the Republicans of the last 20 years have done it better than anyone else.

No, overturning Roe is something that requires a real check.

If the court insists on being a political player and not an impartial arbiter, then maybe it’s time to consider things like “term limits.”

In the meantime, the Court has lost a sense of itself and its adherence to legal precedents. Laws aren’t laws. They’re judges. It’s nine personalities now, six of them far too conservative for where this country is now. The ruling today shows the Court is far too prone to the political, maybe to the point of autocracy. Or, considering the religious bent of the three Trump justices, theocracy?

Neither is why our founders bolted from England. But here’s how bad things have gotten. We are in a different democracy now than what we’re used to.

We knew this is where we were heading. It just hurts more when you see the impact of the court’s ruling on women up close.

On the news, I saw a young Asian American woman interviewed outside the Supreme Court. She was crying for our democracy.

“If feels like a betrayal,” she told NBC News. “It feels like my country doesn’t love me and appreciate my body as a woman…I can’t say anything except that it hurts.” A young woman’s tears were all the evidence one needs.

Something’s out of balance in our country that’s more divided than ever. And, strangely, it’s becoming more Filipino in a way there can be no celebration.

I will talk about this column and other matters on “Emil Amok’s Takeout,” my AAPI micro-talk show. Live @2p Pacific. Livestream on Facebook; my YouTube channel; and Twitter. Catch the recordings on www.amok.com.