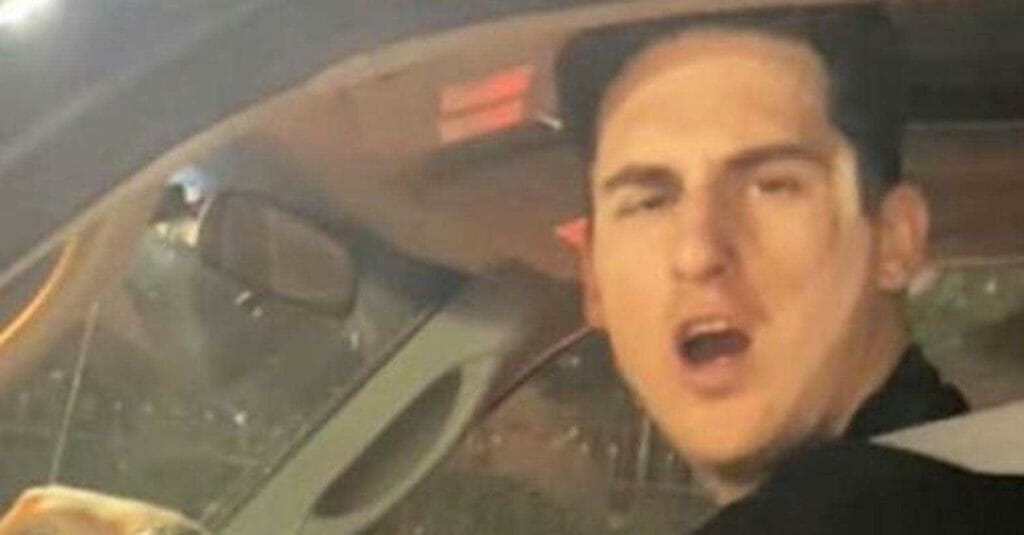 A screenshot from a video taken by Patricia Roque shows Nicholas Weber shouting at her and her mother, Nerissa, before Nerissa and her husband were attacked in a McDonald’s parking lot.(Patricia Roque)

The suspect in an anti-Asian attack on a Filipino family in North Hollywood, California last month was re-arrested in Los Angeles County after he failed to appear in court.

Nicholas Weber, 32, was arrested by Costa Mesa police in Orange County shortly after 7:40 p.m. June 16, when someone reported a man apparently passed out on a sidewalk.

Weber was arrested on an outstanding warrant from the Los Angeles Police Department for felony battery causing serious bodily injury and misdemeanor battery. Both counts carried hate crime enhancements, according to court records.

The LAPD charges stemmed from an incident on May 13 when Weber allegedly rear-ended the vehicle of Patricia Roque and her mother, while they were in the drive-thru line at a fast-food restaurant. He then drove next to their vehicle and was captured on video shouting “You’re so Asian” at the women and threatening them in a racist accent.

Nerissa’s father, Gabriel, arrived at the restaurant, where Weber allegedly pushed him to the ground, breaking his rib. Nerissa was then “strangled” and “hit in the chest” by Weber, Patricia told WLS-TV.

Police detained Weber and issued him a citation with instructions to appear in court June 8, which he ignored.

“The unprovoked assault on members of our community is wrong and will not be tolerated,” L.A. County Dist. Atty. George Gascón said. “Our message against violence and racial hatred must be loud and clear. We will hold accountable the people who commit hate crimes in Los Angeles County.”

Los Angeles County court records show that Weber has several recent arrests and convictions, including for driving under the influence, probation violations and violating a restraining order, according to a report by the LA Times.

In 2012, he was sentenced to two years in state prison and 180 days in county jail, to be served consecutively, after he pleaded no contest in a DUI case, court records show.

In addition to the case involving the Roque family, Weber faces criminal charges of petty theft and public intoxication in a separate case, the records show.

“We’re very much relieved that he’s now in custody,” said daughter Patricia. “We hope that this is a message to not only the victims of Asian hate crimes, but to the people who incite violence against our community. Giving law enforcement pressure is key to fighting for justice, and I thank them for finally apprehending Weber.”