SAN FRANCISCO — To be an 11-year-old a runner/spotter/messenger for the guerillas during the World War II was something very unusual.

But to veteran Jorge Villamarin, now 87, the call of duty was so important that it was just natural to obey orders against a hated enemy, even for someone as young as he was.

It was also fateful that young Jorge also lived in a house that became the intelligence base of the Hunters ROTC, a Filipino guerilla group, in Angono Rizal. It did not matter that he had no experience or needed to be taught for the assigned jobs, he was just too willing to do his share in the war against the Japanese.

“Our house was the secret intelligence base of Hunters ROTC so we, in the family [father Simplicio who became Angono officer-in-charge, brothers Felix and Teofilo, and sister Salome V. Calderon] became part of the movement. Col. Frisco San Juan, Teddy Adevoso and other military officials met in our house. Intelligence officer Major Antonio Liban and my brother Felix Villamarin who was in charge of Angono guerrillas liked the place for its strategic location facing the river where the enemy would be sighted from far away even before the couls cross the river to attack the intelligence base,” Jorge recounted. “They gathered here to get information. I had to get supplies for them so they could eat during their stay in our Angono house.”

As a messenger/runner, Jorge primarily had to make sure that the coast is clear before guerrillas moved from one place to another in Angono. 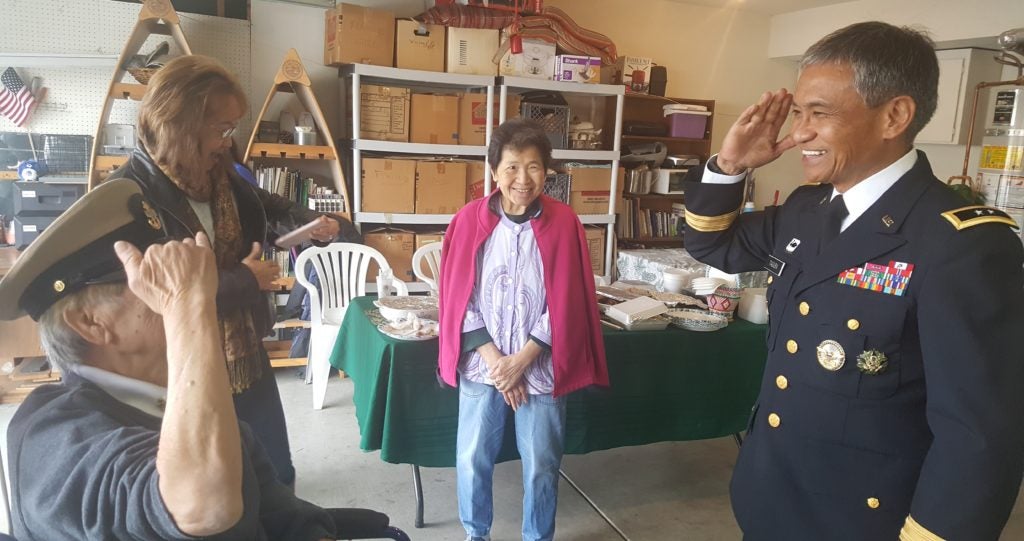 Jorge Villamarin (left) returns the salute given by Gen. Antonio Taguba (right), a show of respect from one military officer and a gentleman to another. In the middle is Jorge wife, Nenita. INQUIRER/Jun Nucum

“I didn’t feel any fear when our house was the intelligence base because I was too young to realize the real danger. I was simply obeying what I was asked to do,” intimated Jorge. “Now at 87 years old, every time I see or watch kids in the news or any video material involved running around the streets in war-torn countries like in Afghanistan and Iraq, I identify with and feel sorry for them.”

The scariest moment for Jorge was when he got lost crossing Laguna Lake, which was filled with water lilies, from Taytay to Angono after guiding a doctor to check on a downed Navy pilot who could not be moved because of the head injuries he sustained.

“Since the area was restricted, I wasn’t sent home by myself, but I lost my way since it was getting dark. So in the middle of Laguna Lake filled with water lilies I was crying because I could not find my way. With persistent pushing away the lilies, shouting for help and with tears in my eyes, I finally found my way back to the shore. From there I was able to make it home,” Jorge recounted.

His saddest experience was when he spotted two Japanese officers who were playing softball in an Angono schoolyard and were unarmed at the time. 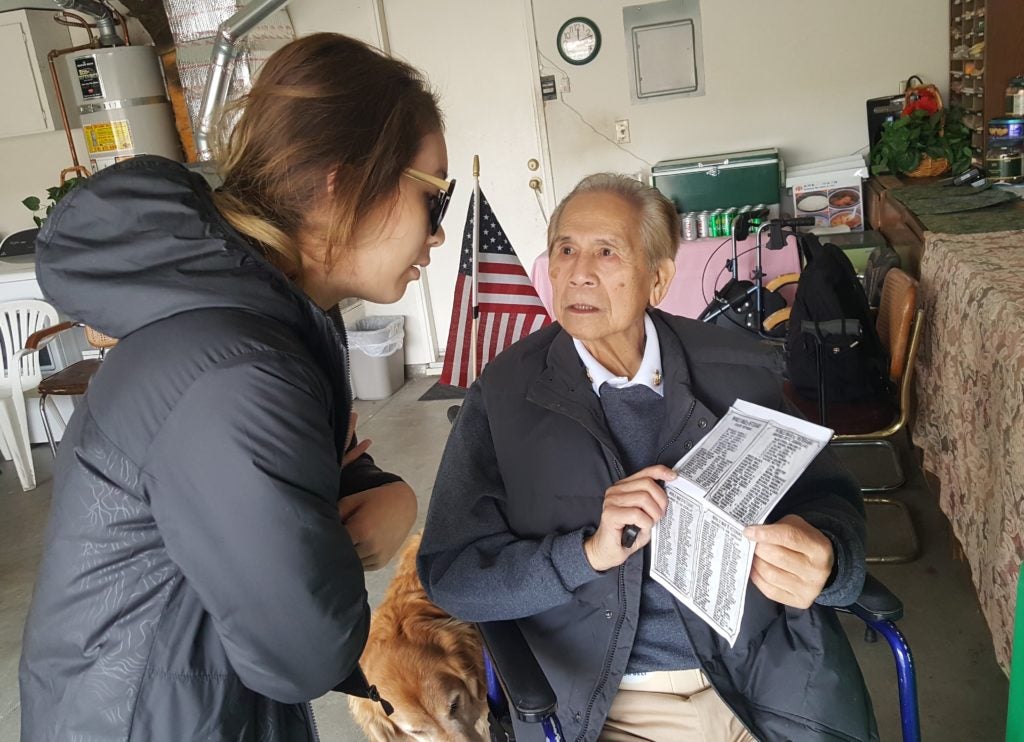 “I went back to the forest mountain to report what I saw and led the guerillas to the schoolyard. Upon seeing the Japanese, the guerillas fired at the officers who also saw them. One was killed on the spot and the other was killed at Laguna Lake. What was sad was that I am pretty sure that Japanese were not armed at all. I saw them as officers and gentlemen far from being just ordinary Japanese soldiers. The Hunters should have just captured them and not have them killed because once you killed a Japanese, ten civilians would be killed in exchange,” explained Jorge.

Jorge was told that the parents of the Japanese killed in Angono turned out to be owners of a big camera lenses company back in Japan. To him it was such a waste of officers’ lives that usually happens during a war.

It was also during that time that Jorge witnessed Japanese getting their ears cut off and being hanged upside down. The Japanese, for their part, usually gathered and killed Filipino civilians inside a church, not showing any respect for the sacredness of the place. This making him sadly realize that there was cruelty on both sides.

Jorge was a Hunter only until the age of 14 and was discharged after that. In 1955, he became the first member of the U.S. Navy from Angono Rizal when he then joined the Navy in Subic. He was in service until 1974, retiring as a chief petty officer.

After retirement he continued serving the public by working with NGOs California Technical Care and Angono Community Technical Center, providing refurbished computers to public schools and establishing computer learning centers in the Philippines and other third world countries from August 2000 to December 2010.

On November 2016, the United States Congress passed the bill that President Obama later signed into law, conferring the Congressional Gold Medal (CGM) to Filipino World War II veterans like Jorge Villamarin, probably the youngest to be given one.

“I feel very vindicated with this Congressional Gold Medal. I used to disregard the honors being accorded to us veterans but now I realize that challenges, sufferings, efforts and the pain that I have been through. So finally, a they recognized what I have been hiding all these years, since I don’t talk about my experiences in World War II because those were truly sad days and years. It is not easy reliving what happened then. But with this recognition, I come to fully realize the importance of what I did. I am still so sad, though, that the war with all the wasted lives and cruelties that came with it happened,” Jorge lamented.

All the time while Jorge was recounting his war exploits, granddaughter Jackie Villamarin was amazed at what she heard.

“Initially I was like, “Wow. What? That’s crazy. Grandpa you were that young? I thought you were already a teenager when you did the tasks asked of you to do. I did not even know that he would be given a Congressional Gold Medal in coming here thinking that we came here from Sacramento just to visit him and Grandma,” Jackie said.

Jorge’s son and Jackie’s father, Dean, also shared that Jorge had told them the stories and experiences that he went through.

“My first reaction was, I can’t believe that was my dad who did that. It was because I only knew about WWII through watching movies, reading about it in books, in school. But to think that my dad was involved, the war suddenly had a face with my dad. Looking back about it, I feel proud and honored of what he did,” Dean beamed. 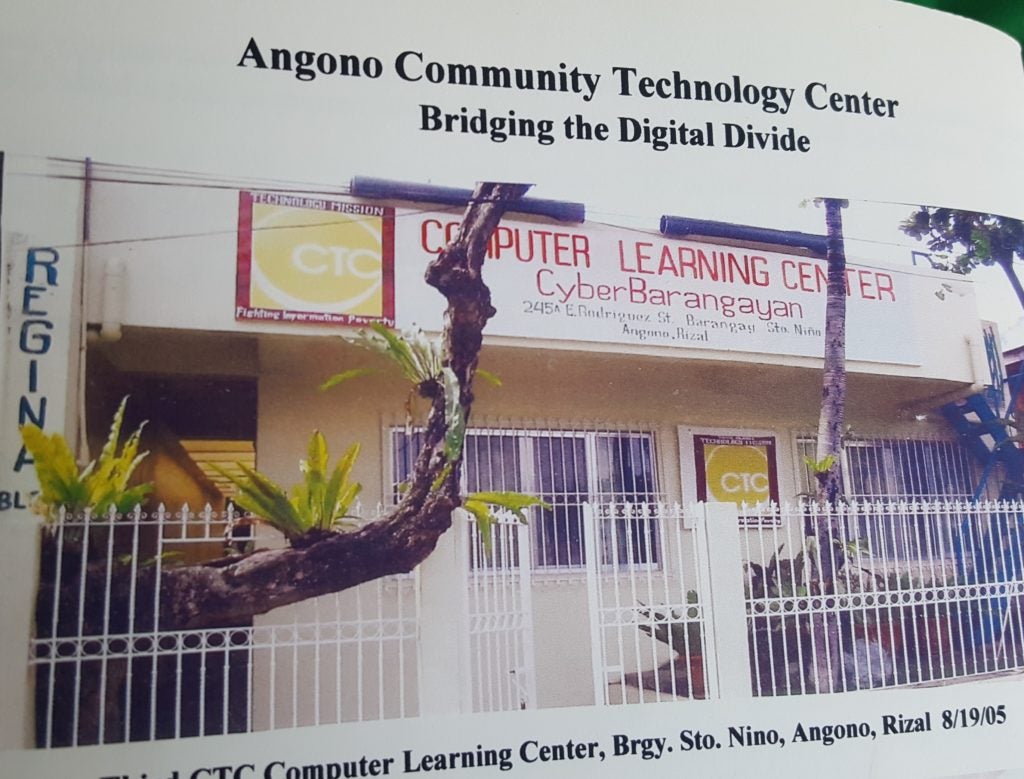 Dean was also happy that U.S. Army Major General (ret.) Antonio Taguba himself would be awarding him the medal. “Thank you to General Taguba and his staff for making this happen and for recognizing the efforts and the sacrifices of people like my dad did during WWII.”

In accordance with Public Law 114265, Taguba came from Virginia to the Bay Area for the awarding of CGMs to veterans in San Francisco, particularly to Jorge in Hayward.

Taguba reiterated though that the CGM has nothing to do with war veterans benefits.

“I want to thank your father, uncle because what he is getting is 75 years old almost as young as he is,” Taguba, whose own father was a veteran, said. “There were about 260,000 of them who were supposed to be U.S. citizens. But Congress, because they could not pay them, took away their U.S. citizenship and denied them their benefits. That is why they were always fighting for their benefits. They had to fight for this country, they had to fight to come here to the U.S. and that they had to fight to prove that they fought in WWII. So, this is the bill passed by Congress that says that they did,” Taguba remarked as he awarded the medal to Jorge.