Big U.S. banks including JPMorgan Chase & Co and Citigroup appear set for some earnings boost from a pick-up in the battered credit-card business, but a possible recession would pull consumers back and bring losses on outstanding loans.

In steady economic times, cards are one of the most profitable businesses for banks, and analysts say a continued upturn in card borrowing would bring relief for banks.

When consumer spending crashed during the pandemic, Citigroup marked a low point as 2020 ended with a 13% fall in quarterly revenue from U.S. Citi-branded cards from a year earlier.

Now overall balances on credit cards and similar loans at U.S. banks are up 15%, as of May 25, from a year earlier, and back near pre-pandemic levels, according to Federal Reserve data. Even better for banks, cardholders now are allowing more of those balances to revolve and incur interest charges instead of paying them off monthly. 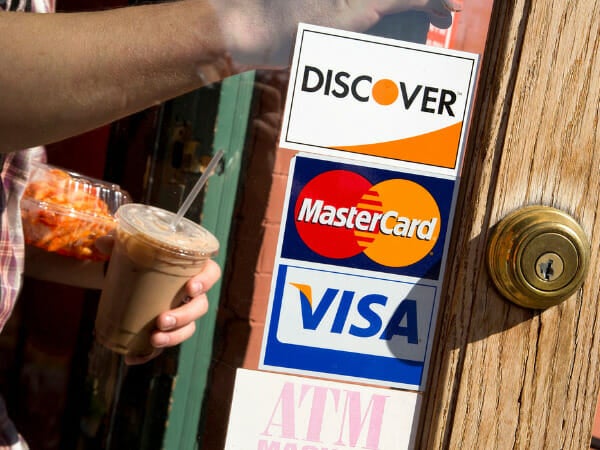 A coffee shop displays signs for Visa, MasterCard and Discover, in Washington, May 1, 2013. This logo has been updated and is no longer in use. REUTERS/Jonathan Ernst/File Photo

While the size of revolving balances is rarely disclosed by banks, it is critical because the interest from revolving accounts brings in much more revenue than transaction fees from merchants, some of which are shared with card networks, such as Visa and Mastercard.

“The most profitable part of the credit card business is the consumer revolving balances and then paying them back over time,” said analyst Jason Goldberg of Barclays.

At JPMorgan, revolving balances are up 8% from the low, Marianne Lake, co-chief of its Chase consumer bank told an investor conference in May.

During pandemic lockdowns, consumers reduced credit card spending and paid down balances like never before, thanks to stimulus payments and cash from refinancing mortgages.

The share of active card accounts with revolving balances share has increased for the past two quarters to 52.6% after plunging to 51.3% in the pandemic. Those balances generally prevailed at around 60% level for the seven years before COVID-19, after being as high as 70% during the 2008 financial crisis, according to data from the American Bankers Association.

Banks say cardholders are paying off their debts a little more slowly now, resulting in higher interest-bearing balances. Discover Financial Services, for example, said payment rates were still significantly higher than before the pandemic but had leveled off and even eased slightly in the first quarter. 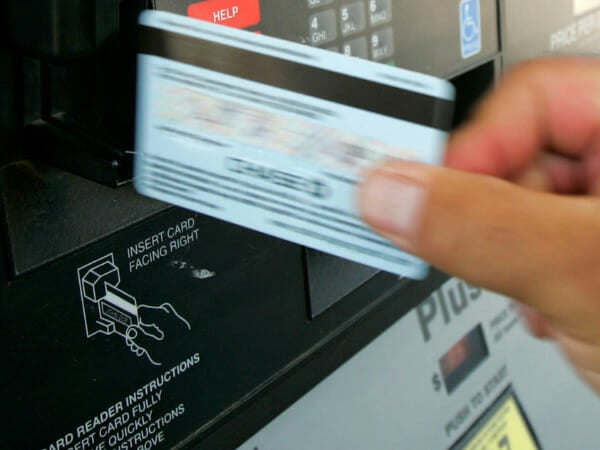 A customer swipes a credit card at a gas pump at a Phillips 66 gas station in Centennial, Colorado June 26, 2006. The gasoline at the station comes from the nearby Suncor Energy refinery. REUTERS/Rick Wilking/File Photo

As lockdowns came off, banks last year stepped up card marketing and eased credit standards they had tightened earlier in the pandemic.

Credit cards issued quarterly jumped 39% in the fourth quarter of 2021 from a year earlier to 21.5 million, the highest on record and 14% higher than before the pandemic, according to credit reporting agency TransUnion.

Chase, the biggest issuer of cards in the United States, has found evidence to quash some investor concern that consumers had sworn off credit cards, JPMorgan’s Lake said.

“Younger generations,” Lake said, “contrary to popular myth, are not averse to credit or credit cards.” Members of the Millennial and Gen-Z generations among Chase customers put 60% of their spending on credit cards. And they are borrowing more as they age, she said.

Debt Settlement: How It works, Risks and Drawbacks

4 easy steps to get a higher credit card limit

Now some investors worry the banks will get too much of a good thing by having promoted credit cards just as the risk of recession rises with tightening Federal Reserve policy.

The banks say they learned from the financial crisis, that knowing whom to lend how much is more important to profits than trying to anticipate recessions.

While card delinquency rates have risen over the past three quarters, they are still below pre-pandemic levels, according to TransUnion data. Charge-off rates for bad credit card loans at banks turned up in the first quarter to 1.82% from 1.57%, according to Federal Reserve data. That’s half of what they were before the pandemic and low enough for banks to make money.

For now, unemployment, a big driver of losses on credit cards, is low and wages are rising, noted Barclays’ Goldberg.

“In the near-term,” Goldberg said, “it should be a fairly profitable business. But banks have to be mindful of the next financial downturn.”