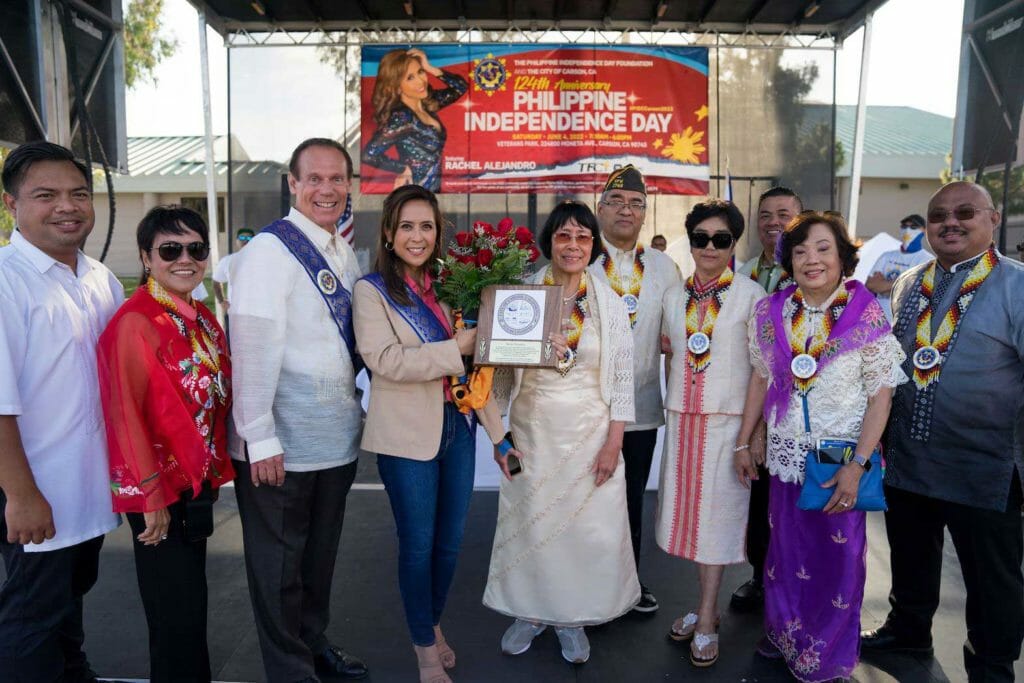 Rachel Alejandro with the board members of the Philippine Independence Day Foundation (PIDF) receiving her award of recognition from the City of Carson. INQUIRER/Hiyasmin Quijano

“I enjoy the fact that after two years of having to celebrate virtually due to Covid-19, we’re once again able to celebrate together as a community!” said Frederick Alain Docdocil, PIDF president and Mabuhay Branch & Business Development coordinator.

“The Philippine Independence Day is all about pride, in our culture, in our community and in our identity as Filipinos and Filipino Americans,” Docdocil said.

Singer and actress Rachel Alejandro headlined the event. She just starred in her first teleserye called The Broken Marriage along with Jodi Sta. Maria and Zanjoe Marudo, which is currently the top show on iWantTFC.

“I find that it is very inspiring to see how Filipinos really step up and make good lives for themselves. A lot of the time I see them working two jobs. Living the American dream,”said Alejandro, who juggles appearances and a U.S. concert tour while auditioning for acting jobs.

Alejandro got the audience feeling at home, and they sang along to some of her OPM hits.

“She is a breath of fresh air to connect and update myself with our beloved root, the Philippines,” commented Paz Villanueva-Cachola Velasquez, member of the Public Relations Commission for the City of Carson and corresponding secretary of the Carson Sister Cities Association. “It reaffirms that we are one, unified as one family.”

On July 9, Alejandro will return to Southern California for a concert at Kusina Filipina Cerritos. 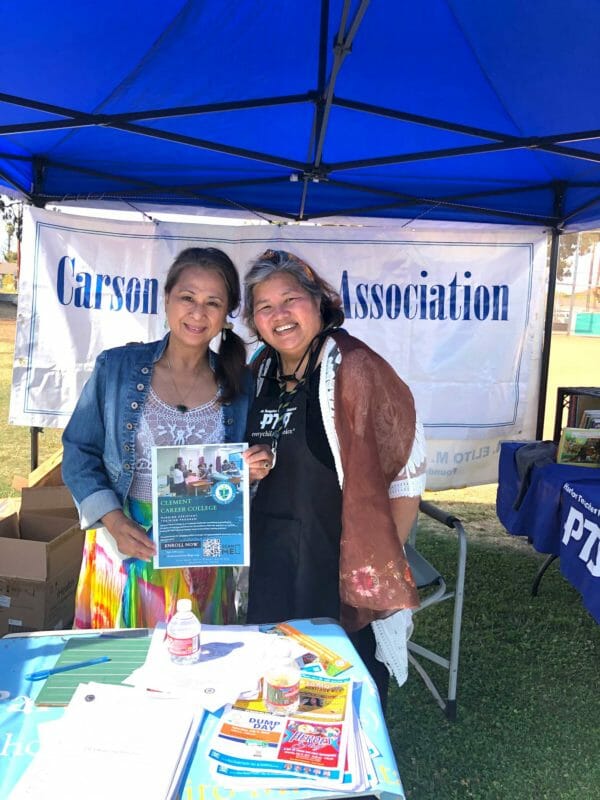 “It is important that we get our youth to be involved and the best way for parents to raise their awareness is by visiting this celebration,” Mangabat added.

“I’ve always been involved with the Filipino community, and this has been one of the biggest community events,” stated Docdocil, who is also president emeritus of the FilAm Chamber of Commerce of South Bay LA Area (FACC-SLAA) and the vice president of Kagay-anons of SoCal (KSC).

“I enjoy the networking, education, sharing and showing of our heritage,” said Mangabat.

“We’re here to promote free training. The Trinity School of Health and Allied Sciences is the recipient in providing immediate and free Certified Nursing Assistant scholarship, to fill up the license CNA shortage, here in the South Bay,” stated Dr. Estrella Azurin Aguinaldo.

Albea shared that her favorite part of the day was interviewing people at the Kumu booth:

“We even asked the Sheriff Department to guess what a tabo was, and we got some pretty good guesses! Some sheriffs guessed it was a soup bowl, while others guessed it was a measuring cup! But we did get a solid answer from one sheriff who said they thought it’s used to shower!”

“It’s moments like these where sharing Filipino culture and celebrating the Philippine Independence Day in America makes me proud to be a Filipino!” Albea said.

Over 70 food, retail, organizational, and cultural booths were among the festival’s many participants.

Randy Santiago, Filipino folk singer Florante, The Mellow Dee’s, and Rachel Alejandro were among the guests and performers.

Your subscription could not be saved. Please try again.
Your subscription has been successful.
MORE STORIES
The Unlikely Love Story: ‘Marrying My High School Bully’
Grammys 2023: “Baraye” by Shervin Hajipour Named Best Song for Social Change
Exploring the Mysterious Dinosaurs of North America’s Lost Continent
Don't miss out on the latest news and information.