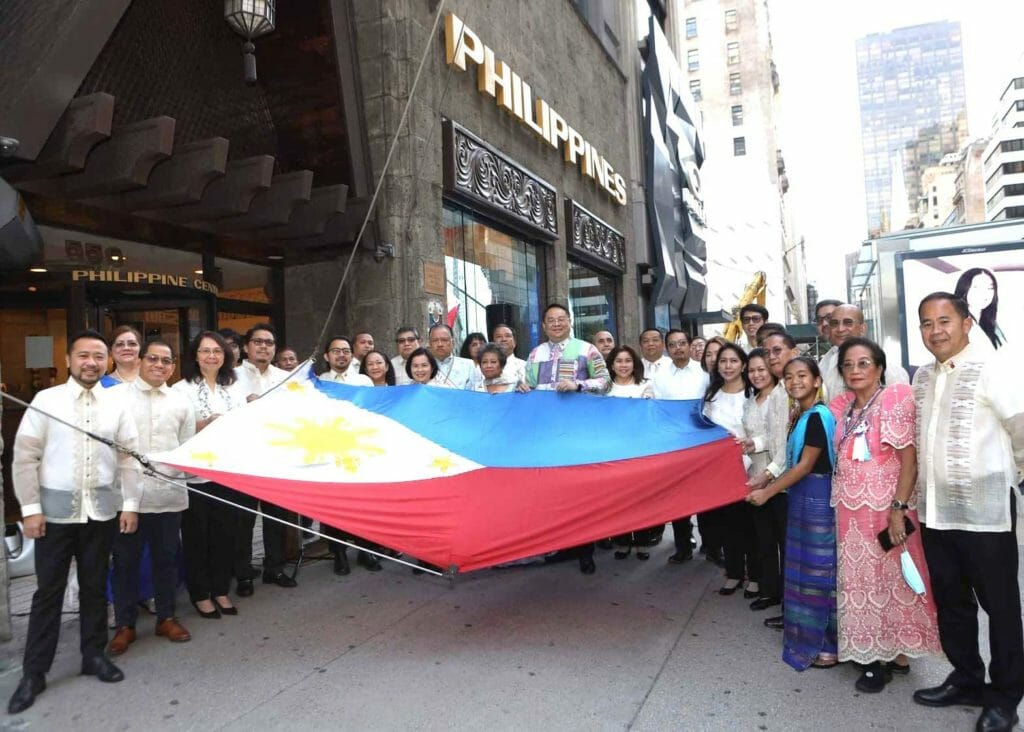 Members and leaders of the Filipino community in New York led by Consul General Elmer Cato prepare to raise the Philippine flag at the opening ceremonies of Kalayaan 2022. INQUIRER/Elton Lugay

NEW YORK—Organizers of this year’s grand Philippine Independence Day parade and show on Madison Avenue were jubilant heading into the cultural festival Wednesday.

It marked the comeback of what is touted as the biggest Philippine Independence Day festivity outside of the Philippines, after two years of hiatus due to the Covid-19 pandemic. More than 30 performers were on hand to entertain the revelers during the show and the parade was decorated by the usual colorful floats and smiling participants.

But one contingent stood out like a sore thumb, wearing mostly black and carrying placards showing the sketched faces of some who died during martial law in the Philippines. They were protesting the electoral victory of President-elect Ferdinand Marcos, Jr. 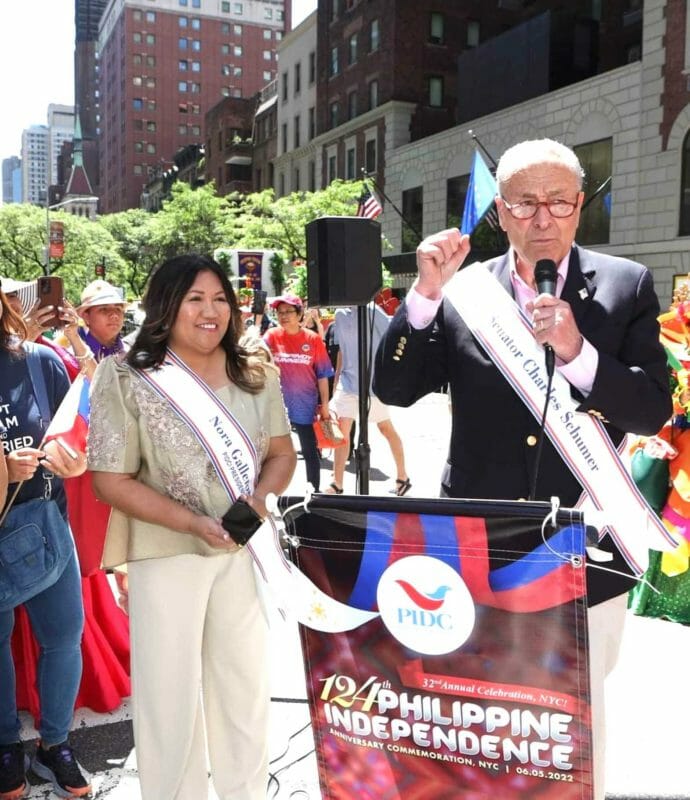 After the parade, they had a sit-in right next to the cultural show location on Madison Square Park, with speakers talking about the need to invalidate Marcos’ win due to alleged massive fraud.

“I only wish that everyone shared the same celebratory feeling, and not ruining it by holding a rally,” Nora Galleros, president of the Philippine Independence Day Council Inc. (PIDCI) told INQUIRER.net.

“This is the only event known in mainstream America for celebrating Philippine Independence Day. It is a cultural festival and everyone is there to celebrate. We felt somewhat disrespected because the protesters did not even tell us they were there for another reason,” Galleros added.

It was not a massive crowd in the hundreds of thousands that went to celebrate Philippine Independence Day this year. But there was a certain warmth, as friends and acquaintances who had not seen each other for two years would exchange hugs and pandemic stories as they met in the crowd.

“While the Independence Day Parade is the heart of our annual celebration, I believe that the cultural festival is the soul. Our kababayans look forward to this celebration every year and the most common question we usually receive is, ‘Sinong artista ang darating this year?’” Arman David, cultural show chairman, told INQUIRER.net. 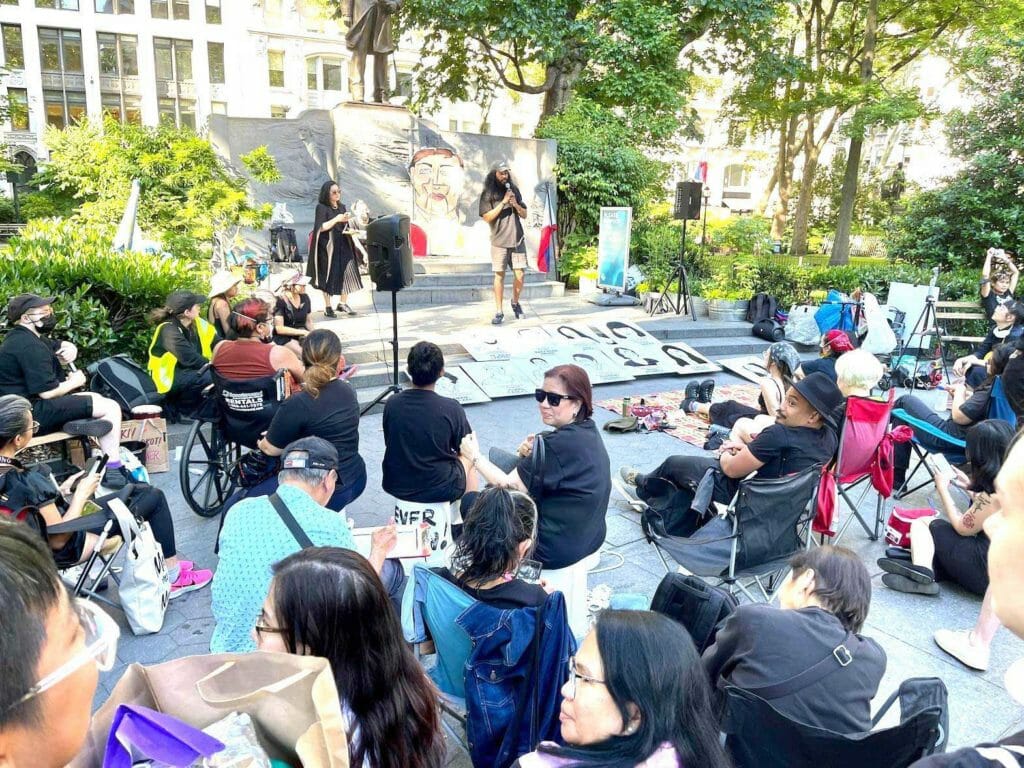 “So, it was important to us to provide a grand ‘welcome back’ celebration to everyone after our two-year hiatus. We showcased over 25 of the best local performers in the East Coast and topped it off with well-known Filipino American artists such as JAGMAC (Radio Disney’s Next Big Thing), Kell Gatdula of South Border, Paco Arespacochaga of the Introvoys, Mica Javier, and Jay R. We also had Ms. Ruby Rodriguez as our special guest host along with JC Capistrano and Amira Allah. As chairman of this year’s cultural event, I want to thank all our performers, sponsors, and volunteers, but most importantly our community for their love and support. I hope everyone enjoyed our cultural show this year,” he said.

Marissa de Guzman, cultural show co-chair, noted that organizing the show was not all that easy. Because of the pandemic, some of the vendors were no longer in business. This scaled down the event’s street fair. There were also some last-minute cancellations.

“Our team was focused on putting on a great event for our kababayans and from the looks of the crowd, social media posts, and direct feedback we’ve received, I believe we accomplished that, if not more,” De Guzman said. “Even our performers have been raving about their great experience and how they’d want to do it again next year. Some people even texted me saying they were late for work the day after because they were so tired from all the dancing and singing. My heart is full and it makes me even prouder to be Filipino. Music truly brings us together.”

Antero Martinez, former PIDCI president, said it was high time to regain a sense of normalcy and admitted to feeling euphoric during the event. 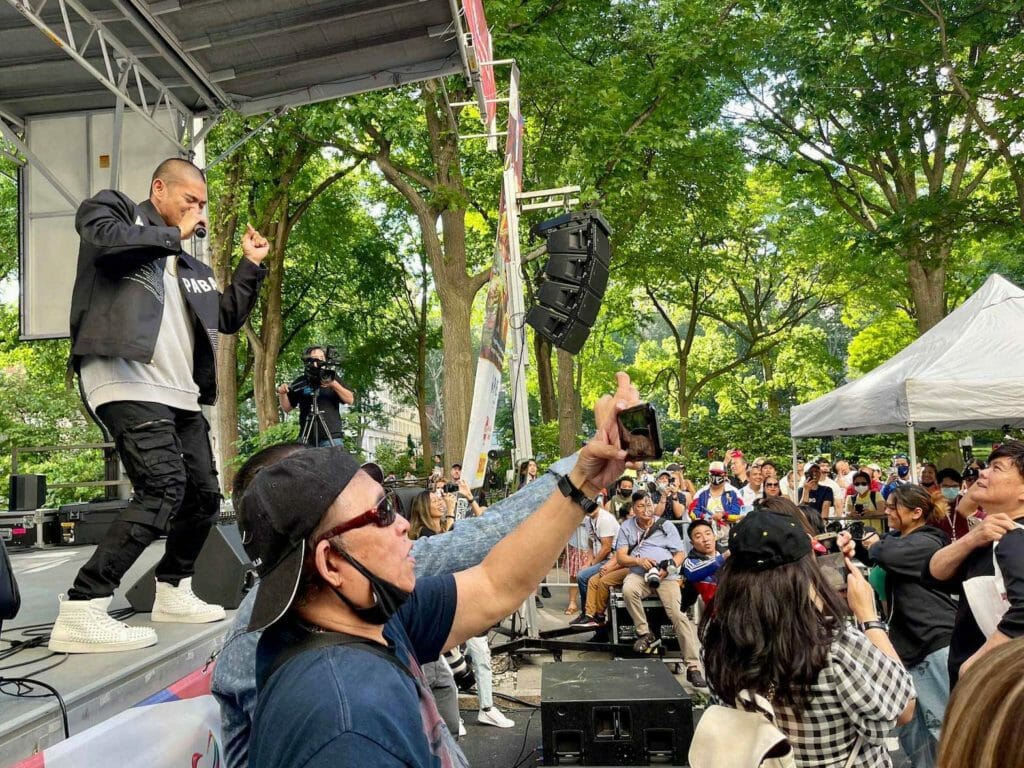 “After several years of community imposed isolation, weight gain, and no physical parade (though we had a virtual one in 2020 and a hybrid virtual/live in 2021), seeing all the contingents that came out to parade, the spectators who lined the streets, the vendors who peddled food and wares, and our energetic line up in our cultural festival as well as our army of volunteers and supporters – it gave me a sense of euphoric high! It’s about time we return to a sense of normalcy (of course with proper health protocols). [I am] truly grateful and equally blessed that we were able to continue our tradition of having a parade in NYC,” he told INQUIRER.net.

According to Arman Talbo, Philippine deputy consul general to New York, the event was a display of Filipino resilience. “I feel the excitement of our FilAm community in New York and nearby states who came in droves to parade and celebrate our independence, showing New York that Filipinos are definitely back after two years of the pandemic. Today we demonstrated that our vibrant Filipino spirit is resilient and our love for our country is strong, as we showcased the best of our culture through our costume, dances, and traditions,” he said.

Your subscription could not be saved. Please try again.
Your subscription has been successful.
MORE STORIES
Former high school student sues ex-tennis coach for rape
Hawaii firefighter who was sucked in storm drain has died
Exclusive: Huge chunk of plants, animals in U.S. at risk of extinction – report
Don't miss out on the latest news and information.

LATEST
Youths push for expanding NSTP instead reviving mandatory ROTC
Staffer who filmed Enhypen’s NAIA screening may be fired – OTS chief
Catriona on marrying Sam: We talk about it
A daily devotional for beauty queen-turned-TV host Rabiya Mateo
From ‘it girl’ to ‘momfluencer’
Your subscription could not be saved. Please try again.
Your subscription has been successful.
MOST READ
usa The Unlikely Love Story: ‘Marrying My High School Bully’
usa Grammys 2023: “Baraye” by Shervin Hajipour Named Best Song for Social Change
usa Sweatblock Review: The Ultimate Solution for Excessive Sweating
usa Exploring the Mysterious Dinosaurs of North America’s Lost Continent
usa Exclusive: Huge chunk of plants, animals in U.S. at risk of extinction – report
usa Koch-backed conservative group ready to back new Republican candidate
DID YOU KNOW?
Kylie Jenner Ramen Recipe: Is It Good?
How to Store Raspberries Properly
How To Play Drunk Jenga: The Ultimate Guide
Best Food to Bring Camping
Popcorn Toppings that Are Perfect for Movie Night