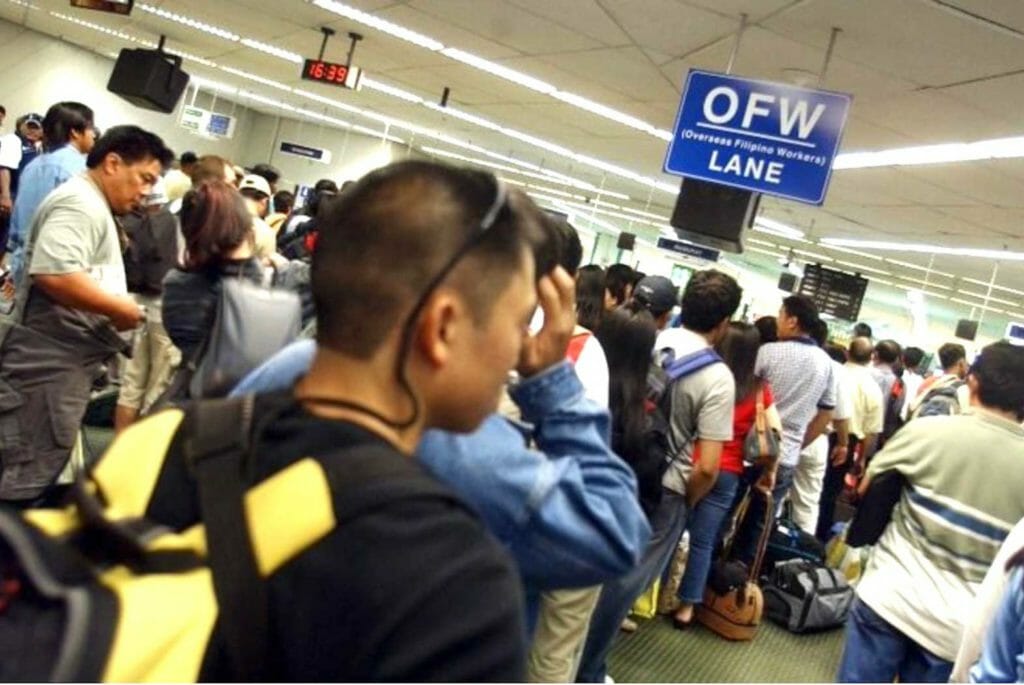 A government study has noted that Saudi Arabia was the leading country of destination for Overseas Filipino Workers, together with the UAE, Kuwait and Qatar. (AFP)

Overseas Filipino workers (OFWs) in the Gulf States experience widespread mistreatment.  There were, for example,  4,621 documented but underexplained OFW deaths between 2014-19 (VS 2022 p.18).

More than 50 percent of migrant worker deaths in the Gulf are categorized as due to ‘natural causes’ like ‘cardiac arrest’ with no indication of the underlying cause. There is a similar trend for OFWs, with 57% of all deaths certified as the result of ‘circulatory diseases,’ which does not address why these workers suffered from these illnesses. (Vital Signs 2022, p26, 18)

The push and pull factors behind why workers choose to take up employment overseas are complex and specific to each OFW, but many are attracted to countries such as Saudi Arabia and the United Arab Emirates to pursue better economic prospects and support their families back home.

To better document, understand, and tackle these issues, the Center for Migrant Advocacy (CMA) was invited by FairSquare, a UK-based non-profit, to collaborate with numerous non-governmental organizations across Asia on the Vital Signs project to address the critical information gap in information on just how many migrant workers are dying and why.

Furthermore, a marked lack of legal protection for Asian migrant workers allow employers to exploit them with impunity in the name of profit or high-profile projects such as the forthcoming Qatar World Cup (Vital Signs 2022, p.33, 46; Pattisson and McIntyre 2021).

CMA conducted interviews with the families of five deceased OFWs in Saudi Arabia who were in their 40s-50s (with 1 case omitted as per the request of the study participant). The occupations of the OFWs were varied, with the OFWs being exposed to health hazards such as heat, radiation, and lack of sleep due to irregular work hours.

All the families claimed that their relatives had been provided protective equipment, food, accommodation, health services when ill, and even transportation services for some. Despite these provisions, the families were shocked by the untimely death of their relatives. This is a trend even among OFWs whose basic needs are provided for by the company, indicating the insufficiency of provisions and workplace policies in preventing poor health outcomes of workers.

Migrant workers are often treated as a disposable labor force in the most dangerous work sectors (such as construction) and suffer from disproportionately high rates of hypertension, mental health issues, and cardiac arrest (Vital Signs 2022, p5, p32-7). Difficult working and living conditions combined with the stresses and anxieties of being away from their families in a foreign country exacerbate the likelihood of developing mental and physical illnesses (VS 2022, p44 footnotes). There is strong evidence that hypertension can be developed as a result of stress, which then compounds the likelihood of developing high blood pressure and heart attacks (ibid).

Moreover, families of deceased OFWs often struggle to access substantial information concerning the deaths, repatriate their bodies, and receive adequate compensation. CMA recently interviewed the family of *Carlos, who was found dead in Saudi Arabia last year. He was 45 years old and worked on the runways at Jeddah Airport. Despite being diagnosed with high cholesterol and having a family history of heart conditions, Carlos persisted with his overseas contract in order to support his family. His son, Justin, recalled that Carlos often worked 10-12 hour shifts in intense heat and suffered from stress and insomnia.

His cause of death is described as “unknown” despite his medical history and the fact that he was taking medication for his heart condition. The authorities informed his family that an autopsy would take almost 6 months as Saudi nationals are prioritized, thus delaying the shipment of Carlos’s remains. His son suspects a heart attack. The disregard shown by Carlos’ employers for his medical condition and the difficulties of obtaining an autopsy are common in numerous cases of OFW deaths. Carlos’s story, unfortunately, is but one of many.

The World Health Organisation (WHO) and the International Labour Organisation (ILO) found in 2021 that the risk of death from heart disease and stroke is exacerbated by long working hours, high heat, and humidity. Migrant workers are disproportionately placed in high-risk sectors such as construction, where they are exposed to air pollution and unsafe working conditions.

Furthermore, high job strain, social isolation, racial discrimination, and low socio-economic status have all been found to contribute to hypertension (Shamin Begam, Srinivasan and Mini 2016; Spruil 2010). OFWs often suffer from one or more of these factors throughout their overseas employment in the GCC.

Vague classification of causes of death spares host country authorities difficult questions. For instance, the family of “Paul,” a Lockout Tagout (LOTO) specialist, had difficulty coming to terms with his death. No investigation took place and the company neglected to properly coordinate with the family regarding his passing.

As per Administrative Order No. 2013-0006 (2013), Filipino applicants for overseas work are required to undergo a pre-employment medical examination (PEME) that deems him or her fit for work abroad. Furthermore, the implementation of the medical decking referral system requires Filipinos applying for work overseas to undergo health screening at Gulf Approved Medical Centers Association (GAMCA) (ABS-CBN News, 2015; LMRA, n.d.).

However, despite the mandated health screening, there are still OFWs with comorbidities who are permitted to work abroad, such as the case of Carlos and Paul. During the launch of the first report of Vital Signs in the Philippines, Alicia Devulgado, president of the Overseas Placement Association of the Philippines, shares her knowledge regarding the issue during the launch of the first Vital Signs report last April 21, 2022.

“There really is a requirement for first time overseas workers to undergo a medical examination by a medical clinic approved by the Saudi embassy or the country of destination (GAMCA)… (if) the worker has an illness… the employer and applicant has a waiver stating that the applicant does not mind going (for work abroad) if that (the comorbidity) is not a life threatening sickness… the medical clinic cannot be blamed because it was explained to the parties fully what the potential risks are… for those who are “Balik-mangagawa’s” (those returning for overseas work)… We (the agency) do not know really if they (the workers) undergo medical examination… (returning workers) have that private contract already with their employer, that they will be returning, in which the agency no longer has participation.” (CMA, 2022) They  do not have to address why so many overseas workers suffer from the same health issues; or draw linkages between exploitation (intentional or unintentional) and worker mortalities.

As well as being disproportionately susceptible to physical ailments, OFWs also suffer from severe mental health issues such as anxiety and depression as a result of physical and psychological abuse, with domestic workers particularly vulnerable and isolated in their employers’ homes. Reports of assault are dishearteningly common, with research from the Human Rights Watch finding that around a quarter of overseas workers report mental health issues as a result of their employment in the GCC. In a single 2-month period, Migrant-Rights.org reported either a migrant worker suicide or attempted suicide every two days in Kuwait.

Several OFWs also reportedly committed suicide during the COVID-19 pandemic, including a Filipino housekeeper in Beirut while the city was under lockdown (Bautista, 2022). The deaths of OFWs have significant run-on effects upon their loved ones, who have to not only mourn a family member but also contend with difficulties in repatriation and address the loss of income. Compensation from employers is often insufficient, and measures of redress are often contingent upon the low-paid workers themselves to take out insurance. OFW families face arduous, long, and often unduly difficult processes to repatriate the bodies of the deceased while also grieving their loved ones.

There are currently government offices such as the Philippine Overseas Labor Office (POLO) and the Overseas Workers Welfare Administration (OWWA) which assist OFWs and their families.  For instance, OWWA provides compensation schemes for families, and the Republic Act 10022 legally requires recruitment agencies to deliver workers’ insurance. However, comprehensive protection of OFW interests and rights is a complex challenge, which requires resources, diplomacy, and time. The Philippine government does have measures to support overseas workers and their families, but it can also do more by holding the GCC states accountable for OFW wellbeing.

The abuse of OFWs, be it through negligence, assault, or pervasive exploitation, is unacceptable. Governments of both origin and host countries as well as employers have a responsibility to treat OFWs not as second-class citizens or a disposable labor, but as people, first and foremost, who deserve health care, protective labor laws, insurance, and fair compensation.

In light of the recent elections, new appointments of government officials, and the transition to the Department of Migrant Workers,  the Philippine government to address labor issues discussed above and to protect the right to health OFWs.