Fourth-grade student Miah Cerrillo, who survived a mass shooting at her Texas school by smearing herself with a classmate’s blood, was set to testify on Wednesday before a U.S. congressional panel as lawmakers work to find a compromise gun safety bill.

The hearing by the U.S. House of Representatives Committee on Oversight and Reform comes about two weeks after a horrific shooting by an 18-year-old at the Robb Elementary School in Uvalde, Texas, that left 19 students and two teachers dead.

It was one of a spate of mass shootings across the United States in recent weeks that killed dozens and sparked a new round of bipartisan talks in the U.S. Senate. With Democrats and Republicans deeply divided on guns, the talks have focused on modest goals including encouraging states to pass “red flag” laws to deny firearms to people judged a risk to themselves or the public.

Republicans, who strongly support the right to keep and bear arms as protected by the Second Amendment of the U.S. Constitution, have objected to proposals such as limited sales of the assault-style rifles used in the Uvalde massacre and another mass shooting at a Buffalo, New York, grocery story that killed 10 Black victims. 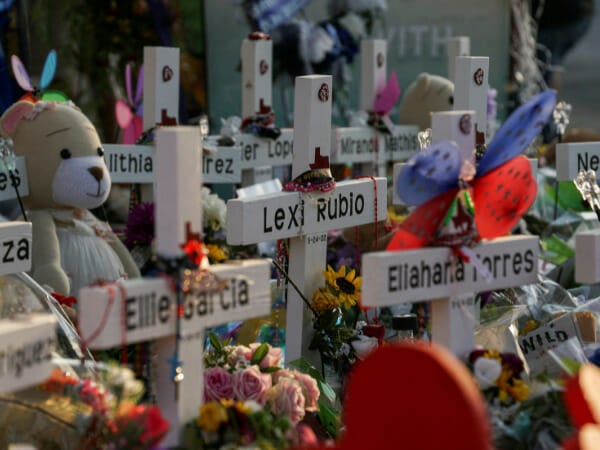 Flowers, toys, and other objects to remember the victims of the deadliest U.S. school mass shooting resulting in the death of 19 children and two teachers, are seen at a memorial at Robb Elementary School in Uvalde, Texas, U.S. May 30, 2022. REUTERS/Veronica G. Cardenas/File Photo

Cerrillo dipped her hand in a slain schoolmate’s blood and spread it on herself in an attempt to appear dead as well.

The parents of one of the dead students also were scheduled to testify as well as the mother of a victim of the Buffalo massacre, the alleged work of an avowed white supremacist.

The full House is set to debate a bill later on Wednesday that would raise the minimum age to 21 from 18 on purchases of certain firearms and toughen prohibitions on untraceable guns. That bill is highly unlikely to pass the Senate, where it would require the votes of 10 Republicans.

The bipartisan Senate negotiations, led by Democrat Chris Murphy and Republican John Cornyn, are also including measures such as upgrades to school security, strengthening mental health services, and doing more to keep guns out of the hands of people who are legally barred from owning them, such as felons.

Rather than pushing for a quick vote on the sweeping House bill, Senate Majority Leader Chuck Schumer has opted to give more time for the bipartisan negotiations.

Texas school shooting victims:’They were just children with their whole lives ahead of them’

Democrats in the past have tried to pass wide-ranging gun control legislation to stem the tide of mass murders, which already have topped 200 this year alone in the United States, and other gun-related violence.

This time, Democrats have signaled to Republicans that they would be willing to accept a much more narrow first step with legislation, even as President Joe Biden calls for tougher action, such as banning assault weapons.

Shortly after the Uvalde shooting, Miah Cerrillo’s aunt, Blanca Rivera, told ABC television news that the young girl was hit by bullet fragments. Referring to her quick decision to play dead, Rivera said, “I don’t know if she was taught to do this. …I can’t explain why she thought of that.”

Republicans have called as a witness for Wednesday’s hearing Lucretia Hughes of the DC Project Women for Gun Rights. The group says it “encourages the preservation of America’s gun culture” while raising awareness of firearms safety.