‘LeniLeaks’ and the Andanar obsession

‘LeniLeaks’ and the Andanar obsession 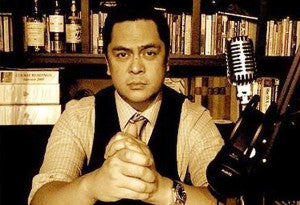 Christmas is still more than 11 months away but I have already been inundated with emails, phone calls and Facebook messages from friends begging to be invited to my next Christmas party. This is all thanks to the “LeniLeaks” offensive of Pres. Duterte’s Communications Secretary Martin Andanar, who charged that the Christmas party at my San Francisco home on December 22, 2016 was the setting of a sinister plot to oust Pres. Duterte.

In his January 7, 2017 “Mancave” podcast entitled “Leni Leaks: Truth or Lies,”, Andanar accused New York philanthropist and community leader Loida Nicolas Lewis of mobilizing Filipino Americans in San Francisco to call for the resignation of Duterte and that the goal of a Duterte resignation was to benefit Vice President Leni Robredo.

Andanar had previously drawn the front-page banner headline of the Philippine Star on September 20, 2016 when he charged that “some Filipino-Americans in New York are hatching a plan to oust President Duterte by January 2017” (“Oust Duterte drive hatched in New York – Andanar”).

But his propaganda campaign against Fil-Ams in New York fizzled because it was based on pure hearsay. “I was just talking to somebody in New York now who is also a member of the Cabinet – I won’t mention his name. But he also heard of the Fil-Ams in New York who are planning. They are hatching a plan to oust the President by January 2017,” Andanar said then.

Andanar’s new target this time around is clear in the widely disseminated article of Duterte supporter John “Boboy” Shinn III, editor of the L.A. Zamboanga Times, who posted “exclusive photos” of Loida Nicolas Lewis and an “anti-Duterte group” attending a Christmas party in San Francisco. 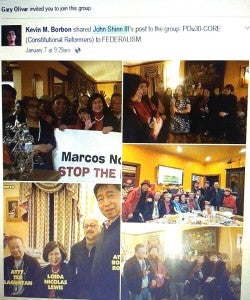 Photos from this columnist’s Christmas party, which posted on Facebook. A pro-Duterte troll claimed they were “exclusive” photos.

Here is Shinn’s report, which was shared with Duterte supporters in social media on January 7, 2017, the day after Andanar’s podcast:

It was also during this gathering that the group launched Filipino Americans for Human Rights Alliance (FAHRA), another lobby group in Loida Nicolas Lewis’ campaign to oust democratically-elected Philippine President Rodrigo Duterte.

From the looks of it all, the Inquirer is leading the oust Duterte campaign in the U.S. with the financial help and guidance of Lewis and her network of connections in the U.S. news media and the Democratic Party.”

Boboy Shinn, whose day job is listed as “paparazzi photographer,” claimed that he had obtained the “exclusive” photos at my Christmas party. In truth, Shinn lifted the photos from my Facebook page, which I posted on the night of the Christmas party.

Shinn also falsely reported the attendance of Inquirer columnists Randy David and Benjamin Pimentel at my Christmas party to support his lie that “from the looks of it,” the Inquirer is behind the ouster plot. 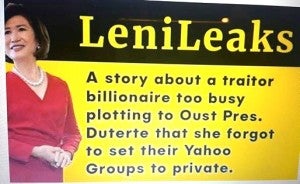 While there were Superior Court judges, Catholic priests and Protestant pastors as well as presidents of local Filipino community organizations who are members of the Filipino American Human Rights Alliance (FAHRA) who were at my Christmas party, Prof. Randy David and Benjamin Pimentel were not among them.

Inquirer columnists not at party

“For the record: I am not part of a U.S.-based group (supposedly led by Loida Nicolas Lewis whom I’ve never met) seeking to oust the fascist Philippine president who instigated the bloodbath that has so far killed more than 5,000 people.

I also was not at a Christmas Party of said group that is conspiring to depose a leader who openly brags about killing people without due process. Said party was held at the home of Rodel Rodis. He did not invite me 🙁

To the alleged plotters working to overthrow a president who once joked about raping a female hostage and who is now begging Putin to be his protector, could you schedule the next Christmas party on a weekend please, not the middle of the week? Will we have to bring a gift?”

Pimentel’s Facebook friend, John Gershman, responded to his post with this advice: “Dude. You need to shift your work schedule to be more available so that conspiracy theorists can more accurately place you in places you aren’t.”

Another Facebook friend, Vivian Araullo, told Pimentel that she was at the Christmas party but heard no discussions about overthrowing Duterte. “Maybe the coup was being plotted in between karaoke singing and lechon?” she surmised.

In his January 8, 2017 Inquirer column (Public Lives: The “conspiracy” to oust Duterte), Prof. Randy David wrote about receiving an angry email from a “former avid fan” who asked him if he was “part of the team to oust President Duterte.”

David investigated the source of the rant and learned that it referred to a November 12, 2016 “email addressed to me and a couple of other people I know, written by an old UP friend from the ’60s, Ted Laguatan, a vigorous human rights campaigner against the Marcos dictatorship and now a prominent US-based immigration lawyer.  In that letter, he was basically proposing the organization of “mass protests against Duterte’s extrajudicial killings and Marcos burial.” Vintage Ted, I thought to myself. Young people were already busy organizing around these issues long before anyone could tell them…. Having just read it, I can say in all honesty that I found no reference to, or any intimation of, any plan to resort to extraconstitutional means to oust President Duterte.”

Business World columnist Greg Macabenta can attest to the absence of Pimentel and David at my Christmas party because he was there “and so were many other prominent Filipino Americans who have been openly condemning the burial of the late President Marcos at the Libingan ng mga Bayani and have been bitterly protesting Duterte’s anti-drug campaign — a campaign that has made accusers, judges, and executioners out of unidentified vigilantes and members of the Philippine National Police,” he wrote. 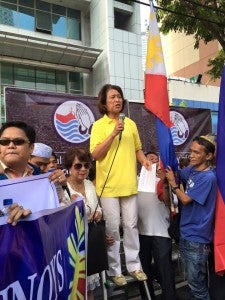 Shinn’s fake news article was disseminated by Sass Rogando Sassot and Mocha Uson, the “generals” in Duterte’s vast online army of trolls who were enlisted by Andanar to go after Loida Lewis and Filipino Americans opposed to Duterte.

In Mocha Uson’s Youtube directive to her Duterte army of trolls, she paused to read an email message to her purportedly from Secretary of Justice Vitaliano Aguirre, informing her that a source had told him that Robredo and Lewis had met in the US. This bit of double hearsay was enough for Uson to tell her followers to spread the word that Robredo and Lewis are “liars” for denying that they met in the United States and that they should be exposed.

The timing of the simultaneous social media attacks by “LeniLeaks” is not coincidental as Communications Secretary Andanar oversees both the vast propaganda machinery of the Philippine government bureaucracy as well as the formidable online Duterte army of trolls ready to pounce and attack anyone perceived to be a threat to Duterte.

In an article that appeared in New Republic (“Rodrigo Duterte’s Army of Online Trolls: How authoritarian regimes are winning the social media wars,” January 4, 2017), Sean Williams explained the origin of Duterte’s troll army:

“Duterte’s social media campaign began while he was the mayor of Davao, where he allegedly ran death squads to curb rampant drug dealing and other street crime. In November 2015, when he decided to run for president, he enlisted a marketing consultant named Nic Gabunada to assemble a social media army with a budget of just over $200,000. Gabunada used the money to pay hundreds of prominent online voices to flood social media with pro-Duterte comments, popularize hashtags, and attack critics. Despite being vastly outspent by his rivals, Duterte swept to power with almost 40 percent of the vote. After the upset victory, the new president’s spokesman issued a warm thanks to Duterte’s 14 million social media “volunteers.”

The government pays online trolls up to $2,000 a month to create fake social media accounts and flood the digital airwaves with propaganda.

The Philippines seems tailor-made for this kind of propaganda machine. The median age in the country is only 23 years old, and almost half of its 103 million citizens are active social media users. Access to Facebook is provided free with all smartphones, but Filipinos incur data charges when visiting other web sites, including those of newspapers. As a result, millions of citizens rely on social media for virtually all their news and information, consuming a daily diet of partisan opinion that masquerades as fact.”

But Andanar’s Operation “LeniLeaks” may be running out of steam. When he sought to include the issue in the Duterte cabinet meeting on January 9, he was shot down by Duterte National Security Adviser Hermogenes Esperon, Jr., who told the press “the President and his Cabinet members had other important issues to deal with rather than focus on the so-called “LeniLeaks.’”

In a TV interview on ABS-CBN, Loida Nicolas Lewis denied that there was any plot to oust Duterte. “The Duterte Resign Movement is based on President Duterte’s own words that he would resign if drugs are still rampant six months after his inauguration,” she said.

Lewis also emphasized that “dissent is NOT equivalent to a plot or conspiracy. In a democracy, opinions of varying shades, either praise or criticism, are a staple ingredient of a vibrant democracy. Since when has criticism become an element of sedition?”

When asked to comment on Lewis’ charge that Duterte had promised to resign if he did not succeed in dealing with the country’s drug problems within six months, Andanar replied: “The President asked for an extension.” 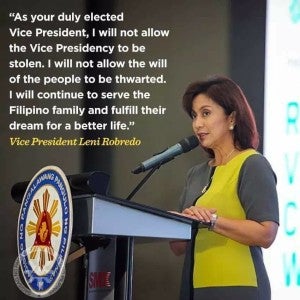 So when will the Filipino people be asked to vote on Duterte’s extension request?

Since Andanar could not even get the Duterte cabinet to take his “LeniLeaks” charge seriously, he had to change his strategy. His Presidential Communications Office (PCO) released a statement that “it is now up to Vice President Leni Robredo to convince the public whether the so-called ‘LeniLeaks’ are true or not.”

In other words, since Communications Secretary Andanar can’t prove Robredo guilty, Vice-President Robredo will now have to prove to the public that she is innocent.

Martin Andanar is nothing if not obsessively persistent and clever by half.