Quo Vadis, Philippines: Rage Against the Dying of the Light - Part III

Quo Vadis, Philippines: Rage Against the Dying of the Light – Part III 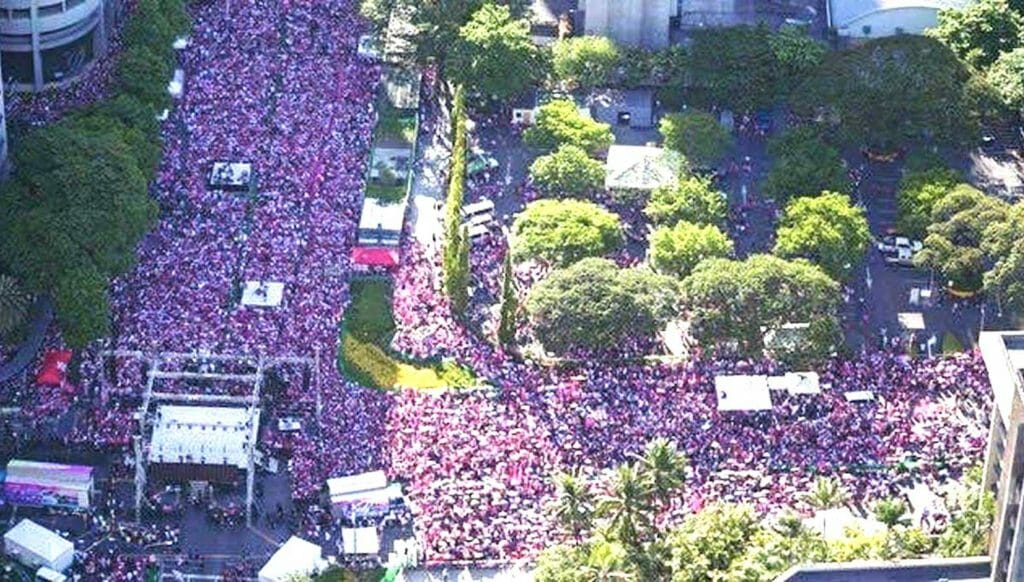 Aerial shot of Ayala Avenue and Makati Avenue as of 4:30 p.m. ahead of Robredo-Pangilinan’s Miting de Avance, May 7, 2022. PHOTO TEAM KIKO/JIMMY DASAL

NEW YORK—During Cory Aquino’s first and only term as president, her administration had this on billboards around the archipelago as a rallying cry and a reminder of what the state had endured during two decades of misrule and plunder under the Marcos regime: “Bayan Muna Bago Ang Sarili,” or “Country First Before Self.” While it resonated with the populace, I thought it would have been stronger had it been reworded thus: “Bayan Muna Bago Ang Mga Kamaganak” or “Country First Before the Clan.” For it is the clan and not any individual that remains the biggest stumbling block on the road to a full-fledged democracy.

While the clan is a great source of strength in Philippine society, it is at the same time a great source of weakness—both benediction and burden. Familial bonds, blood ties, can provide a refuge and safety net, particularly when the larger world is perceived to be indifferent or, worse, hostile. Philippine society is in the main really a patchwork of  various families, of clans, each with its own interests and respective turfs to protect. While ostensibly meant to provide a level playing field for all, institutions are bent by the dominant political clans du jour to serve their ends, no matter that these ends may be at odds with an institution’s aims. The term “society” thus becomes nothing more than a synonym for unwelcome competition. Without the latter, corruption flourishes, poverty increases, and the desire to hold on to power intensifies, leading to the formation of a dynasty coterminous with a particular clan. Within this purview, the “common good” means nothing if it doesn’t redound to the clan’s benefit.

The framers of the 1987 Constitution, acutely aware of the deleterious effect that political dynasties have on the state’s economic, political, and social well-being, included this declaration: “The State shall guarantee equal access to opportunities for public service, and prohibit political dynasties as may be defined by law.” Unfortunately, to this day, no law exists that actually prohibits the consolidation of political power by any one family or clan.

Since 1987, a number of anti-dynasty bills have been proposed but have never been acted upon by Congress—not at all surprising, given that the legislature is dominated by well-connected political clans, wolves guarding the hen house. In 2020, Senators Francis Pangilinan and Franklin Drilon urged President Rodrigo Duterte to get Congress to pass the stalled legislation. But in 2018, the president made clear his opposition by expressing his belief that an anti-dynasty law would be undemocratic. Why shouldn’t constituents vote for the candidate they prefer? His spokesperson Harry Roque justified having family members and relatives of an incumbent or incumbents running for public office being voted into power by claiming that the voice of the people is “the voice of God.” No surprise there as the Dutertes are a political dynasty that will further be entrenched alongside the Marcos dynasty, when Sara Duterte will be sworn in as vice-president together with the younger Marcos as president.

For at least the next six years the Marcoses and the Dutertes will dominate the political landscape, with the lesser clans—the Macapagal-Arroyos, Aguilar-Villars, Estradas, Binays, Aquinos, Ampatuans, Roxases, among others—waiting in the wings for their turn at the nation’s helm. Research conducted by Ateneo de Manila University’s School of Government in 2019 showed that 76% percent of governors, 78% of Congress, and 51% of mayors come from political clans. Much much less than 1%, or 250 families out of an estimated 15 million, are entrenched in 94% of the provinces, thus dominating local and national electoral cycles.

You might say that the dynasties carry on in the tradition of the divine right of kings. An analogy with Mafia families would not be out of order, being that the operative principle of zealously guarding one’s turf and its profit-making enterprises animates both the Mafiosi and political dynasties as well. Nor will many of the Philippine political dynasties hesitate to employ violence if they feel their monopolies are threatened.

As for left-wing opposition, in the more than three decades that have passed since the 1986 People Power peaceful uprising that kicked out the Marcoses, the left has been left behind, particularly the hardline left made up of the Maoist Communist Party of the Philippines, the National Democratic Front, and the New People’s Army. Except for Leody de Guzman and Walden Bello’s democratic socialist platform, the left was invisible in these last elections. Nonetheless, their run for the top government posts focused the national spotlight, however briefly, on a much needed progressive agenda, providing a glimmer of hope.

With outgoing Vice-President Leni Robredo’s Kilusang Rosas, or Pink Movement, centered on its signature anti-poverty platform Angat Buhay (Lift Lives), to be formally launched on July 1st  as a non-governmental organization, the possibility of a centrist-left coalition can widen that glimmer into a broad portal so all of us sickened, disgusted, and furious by the restoration of the old feudalistic order can, albeit peacefully, to quote Dylan Thomas, “Rage, rage against the dying of the light.”