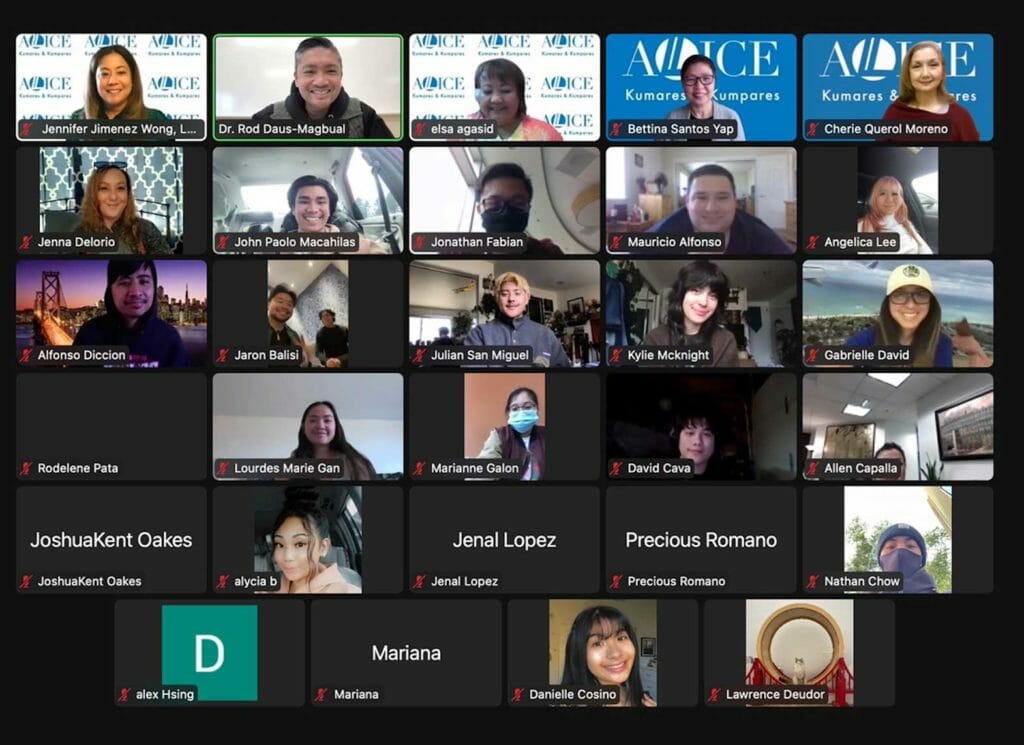 With the Philippines’ colonial past as backdrop, Daus-Magbual opened his students’ eyes to generational trauma and, if unaddressed, its lasting injuries to the citizenry.

“Decolonization provides a framework for healing, activism, organizing and hope,” he told INQUIRER.net.  “My students learn about precolonial Philippine society. They are introduced to babaylan, who served as the spiritual and community leaders of their clans and challenging notions of spirituality and pre-Catholic beliefs and practices; and reciprocal connection between land, life, and nature through kapwa, a precolonial Filipino value of shared identity.”

He instructs students to develop projects that build organization and leadership.  Recently they heard ideas from Brandon Lee, an indigenous land protector in the Cordillera Mountains in the Philippines who survived an assassination attempt by the Philippined military.

They listened to leaders of the San Mateo County Filipino Mental Health Initiative about the layers of depression and anxiety resulting from colonial mentality and their effort to build a cultural center addressing those issues.

In a bold move to tackle what he concedes as a “taboo issue” among Filipinos, Daus-Magbual invited ALLICE to uncover IPV and break the silence about its existence to stop it from happening or recurring.

“”It is critical to start the conversation in a safe space where I can provide a historical and social context for violence, acknowledge the harm, understand the dynamics and power in abusive relationships and provide strategies and resources for my students,” said the Canada-born, Southern California-raised educator.

Attendees heard ALLICE vice president Jen Jimenez Wong, a licensed marriage and family therapist, define intimate partner abuse as “a pattern of behaviors used by one to maintain power and control” over an intimate partner.

Regardless of background, anyone may acquire the behavior often learned from elders and role models, she said.  Similarly, anyone unaware of the signs for abusive behavior and forms of abuse may unknowingly enter an abusive relationship.

Such relationships have lifelong effects, she stressed, tying the issue with Daus-Magbual’s pronouncement of the impact of colonial trauma.

She cited factors that push and pull survivors out and back into abusive relationships.  Concern for personal safety pushes a survivor out and back in, out of fear of the abuser’s retaliation, shame for not working with the abuser on making the relationship work thereby embarrassing her family, for example. 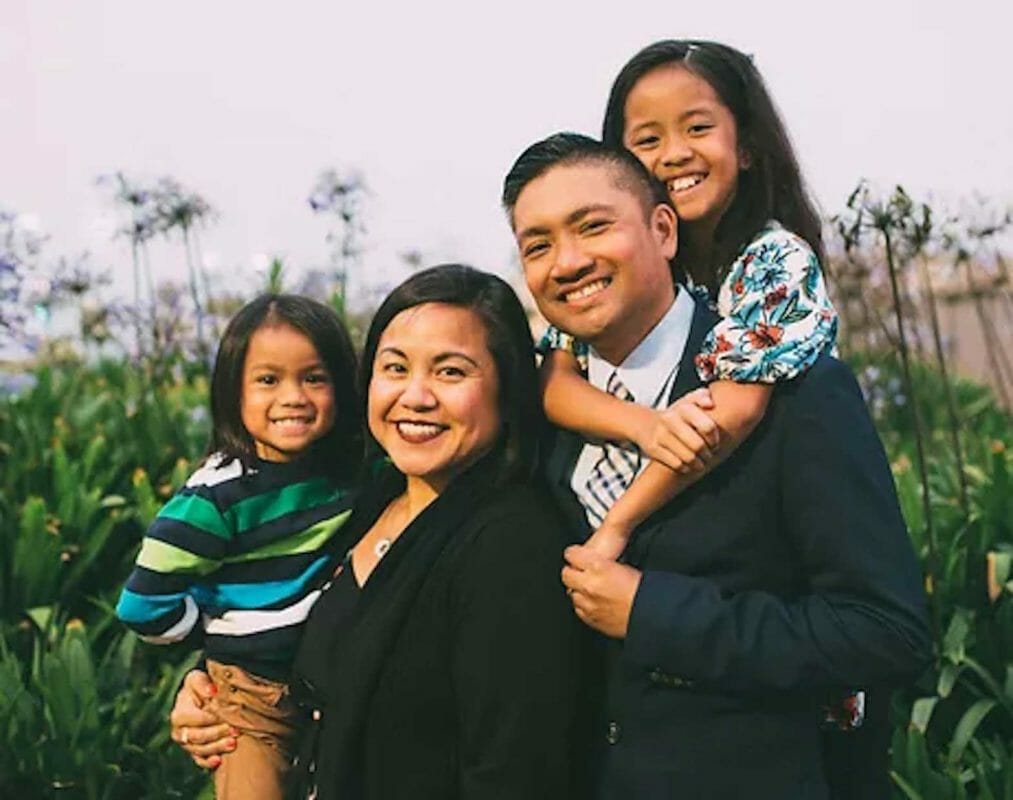 Besides the obvious forms of abuse – physical and verbal – she cited digital abuse, or the use of technology to stalk, harass and threaten survivors.  She pointed to the practice of spell-casting, as in the case of still-missing San Diego area Fil-Am Maya Millete, whose husband reportedly contacted “sorcerers” online to have Maya fall in love with him again.  When that failed, he changed his instruction to “hex her to have her hurt enough that she will have to depend on me and need my help.”

Students listened intently as ALLICE Kumare Elsa Agasid, a family nurse practitioner working in palliative care, depicted her experience with IPV that deepened her low self-esteem and feelings of inadequacy.

Agasid was two years old when her parents came to this country for her Korean War veteran father to access service-connected medical care.  She was one of two Asians in a predominantly Black studentry taught by all-white teachers in the 1950s.  She did not have opportunity to discern unhealthy relationships, she said, as she shared how she married the first man she ever dated.  She mistook his escalating controlling behavior for love and passion.

Enlightenment came from Agasid’s pastor and the facilitator of a support group for abuse survivors, Paulita Lasola Malay, a longtime ALLICE member.  But first she had to open up to them, the first step toward overcoming the hurt.

“Healing is a continuing process,” said Agasid, who identifies as a “wounded healer.”

Empathy is key to helping survivors, reiterated ALLICE founding president Bettina Santos Yap.  She listed some ways to help including “active listening and not interrupting.”

“Respect their autonomy by asking them what they need and how you can help them,” she said, holding up a directory of services published by the organization.  Called “A-List,” the booklet lists family service providers vetted for cultural and linguistic competence.  The 2022 edition is sponsored by the Town of Colma.

The students’ comments reflected their awareness of the issue.  One raised his family’s skepticism about going to the police for intervention, a common mindset among those who had fled tyranny in their birth land.

Another lauded IPV training now required in the police academy. One    theposting of small stickers with the IPV hotline in public restrooms, a stealth tactic to bridge survivors with providers.

Their professor appreciated that his students “learned about the uneven power dynamics in intimate relationships that cause indebtedness (utang na loob) and the danger” of replicating abuse.  The father of two commended the video showing fear, violence and harm are learned in infancy and not later in life, a common assumption.

“Marginalization of news reports that do not mention domestic violence in the Filipino community” disheartened Daus-Magbual.  Hearing the various forms of abuse in actual Filipino cases and Agasid’s personal testimony struck him as “authentic and real”(lessons) he hopes his students would “apply to their lives,” said the community advocate, who is a first-time Mayor of Daly City.

His dual leadership role gives him a platform to work toward the decolonization he hopes to achieve for his class and beyond. His elected post, he said, is ideal for his brand of education.

“I teach the whole range of students from Lolos and Lolas, to peers who want to change careers, single parents, working class people, to first year college students that gives me the insight on what issues affect them.”  He asks: “What are the hardships they go through? What do they wish to see in the communities they live, especially since a large majority are from Daly City.”  .

“Being an Ethnic Studies educator gives me the interdisciplinary lens to look at history, politics, sociology, anthropology, and psychology to help inform my decision as a policy maker,” he explained. “I have a holistic view of the past, the grit to work together in the present, and an imaginative view of the future.”

Daus-Magbual and his wife Arlene are both longtime social activists, UC Riverside alums  and co-authors of Critical [email protected] Parenting and collaborators behind [email protected] Educational Partnerships.  At a mentoring program founded by SFSU Asian American Studies Prof. Dr. Allyson Tintiangco-Cubales, they have guided almost 350 teachers in preparing for all levels of education.

“I learned that understanding our history has power to know who you are,  the story of your family, your community, your people and it becomes the fuel to transform and serve our community to fight for equity and ultimately for freedom,” he asserted.

A first-generation Filipino-Canadian American, he can relate to his students including mixed-race Filipinos with a passion driven by his personal motto, “No history, no self.”