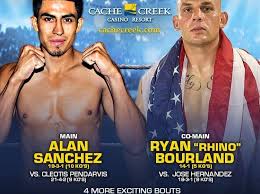 Sanchez (19-3-1, 10 KOs) is a boxer-puncher who likes to mix it up. His last appearance in the ring was an impressive one. The 26-year-old from Fairfield pummeled former title challenger Miguel Angel Huerta from the opening bell, winning by a stoppage in round five.

Impressive as his victory was, Sanchez is determined to keep improving. “I always feel like I can do better,” he said.

Prior to defeating Huerta, Sanchez upset ranking welterweight contender Pablo Cano for the vacant WBC Continental Americas Welterweight title in Las Vegas.  Cano, who’s been in the ring with former, champions Shane Mosley and Paulie Malignaggi, expected to use a victory over Sanchez to position himself for a shot at a world title. Instead, Sanchez used his natural athleticism to outclass Cano over ten exciting rounds, winning the title match by majority decision.

“It’s difficult to get fights for Alan because nobody wants to fight him,” said Paco Damian of Paco Presents Boxing who is promoting with legendary matchmaker Don “War-a-week” Chargin. Damian prides himself on following Chargin’s example of staging exciting and competitive fights.

Agaton (20-6-3, 10 KOs) of Mexico City, is a tough southpaw who has faced a number of world class fighters. He is no stranger to fighting in someone else’s backyard.

Agaton stated, “I have seen Alan, I know he is a tough competitor; however, I have been training and I am in great shape. So when I received the phone call to challenge him, I didn’t think twice about it! This is a great opportunity and I am going to give everything I have in the ring.”

Bourland has never met a fight he did not like. His last bout was one of the most exciting light heavyweight brawls ever seen off TV. Bourland and Cesar Ruiz fought tooth and nail, exchanging heavy punches with abandon, and leaving the fight fans in attendance hoarse. Bourland had to dig down deep to get the victory.

“I know my will is stronger in the deep waters,” Bourland said. “I will not drown.”

“Rhino Bourland is a throwback to the old blood and guts fighters,” said Don Chargin. “Lots of action! Lots of thrills!”

Also fighting Feb.10 is super flyweight contender Bruno Escalante (15-3-1, 6 KOs) of San Mateo, California vs. Javier Gallo (25-14-1, 13 KOs) of Buena Park. Escalante sports an excellent record of 15 wins in 18 fights. The 5’2” dynamo is determined to work his way up the world rankings.

Exciting super bantamweight Ivan Vergara (3-0, 2 KOs) of Vacaville will take on Michael Gaxiola (4-12) of Modesto. Vergara, who knocked out Jose Mora in two brutal rounds six months ago, will return to the ring at Cache Creek for the second time in his young career.

Rounding out the card is debuting super featherweight Arnold “Hawaiian Pitbull” Dinong of Hawaii against Tylor Marshall (1-4, 1 KO) of San Diego. Dinong is known for mixing it up as soon as the bell rings.

Tickets, start at $65 and are now available at CacheCreek.com, Tickets.com, and Pacopresentsboxing.com, or by calling Tickets.com at 1-800-225-2277.