Dems headed for Nov. midterm polls with an energized base

Dems headed for Nov. midterm polls with an energized base 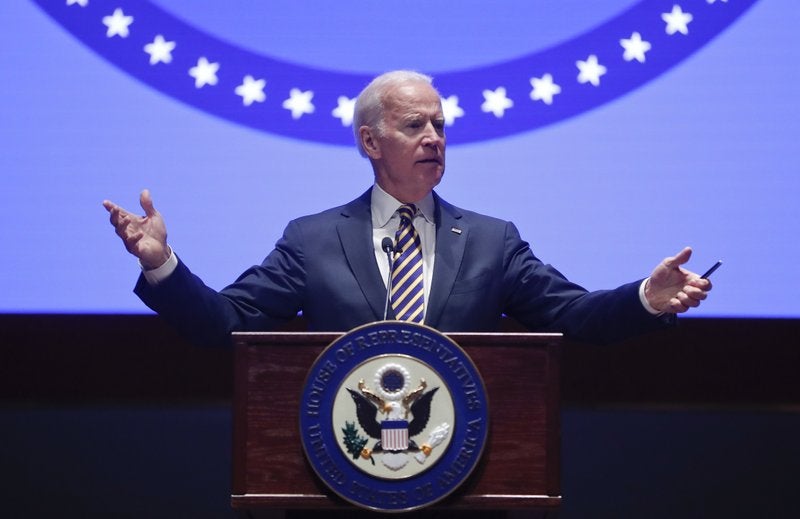 WASHINGTON— Democrats are heading into the November elections with an energized party base, an unpopular president to rail against and a growing wave of GOP retirements. Now they just need a clear message.

In recent weeks, lawmakers have zigzagged from digging in against President Donald Trump — even forcing a government shutdown — to trying to cut deals. They’ve played to their core supporters on immigration, only to shift quickly to the middle on spending. They’ve amplified news about the Russia investigation and dueling classified memos, at the risk of drowning out their objections to Trump’s economic policies.

Democrats had planned to retreat to Maryland’s Eastern Shore to discuss 2018 strategy Wednesday, but instead were stuck in Washington locked in an immigration and spending debate that put their divisions on full display.

As Senate Democratic leader Chuck Schumer called a two-year, bipartisan budget deal the “best thing” lawmakers have done for the middle class, his counterpart in the House was nearly three hours in to a marathon speech protesting the deal. Backed by progressives and immigration activists, House Democratic leader Nancy Pelosi held the floor for eight hours as she sought to force a House vote on legislation to protect young immigrants known as “Dreamers,” who face deportation after Trump threatened to remove protections established by President Barack Obama.

Senate Democrats tried a similar hardline strategy, only to back off as Republicans accused them of shutting down the government over immigrants.

Pelosi yielded Wednesday night without an agreement from GOP leaders for a vote on immigration, but her talkathon was met with cheers and high-fives from fellow Democrats.

Former Vice President Joe Biden also drew cheers as he told Democrats they have “a real opportunity to take back” the majority in the House and even the Senate.

Biden said Democrats must focus on middle-class families while standing up for the nation’s core values, which he said are under “direct assault” from Trump and congressional Republicans.

New York Rep. Hakeem Jeffries, who is part of the House Democratic messaging operation, said the goal of the meetings was to “further develop an affirmative vision for how Democrats will improve the lives of the American people.”

That vision is now captured in the “A Better Deal” policy statement, which includes traditional causes as a higher minimum wage, paid leave for employees and lower costs for prescription drugs and college.

Still, Democrats end up spending much of their time lambasting Trump — whether it’s his policies, special counsel Robert Mueller’s investigation or Trump’s tweets.

“It’s tough to ignore the elephant in the room. The Bob Mueller investigation goes to the heart of the Trump candidacy and presidency,” said Sen. Dick Durbin of Illinois, the Senate’s No. 2 Democrat.

In many ways, Trump’s presidency has been good for Democrats. They’ve felt growing momentum at the end of last year after winning the Virginia governor’s race and a special election for a Senate seat in Alabama, as well some down-ballot contests. They feeling increasingly optimistic about the fall elections, particularly in the House, where they must flip 24 GOP-held seats to gain control.

In the Senate, Democrats are defending 26 seats, including 10 seats in states Trump won. Republicans are defending just eight seats as they try to hold their 51-49 advantage.

But the wounds from the last war remain. A significant wing of the party continues to push for sharpened focus on a more populist economic message.

“We need an agenda that speaks to an angry middle class that wants the government representing them and not just the Koch brothers and other billionaires,” said Sen. Bernie Sanders, a Vermont independent who caucuses with Democrats.

“There is an essential agreement on what has to be talked about,” he said.

There is no agreement on how to talk about it.

This week Republicans targeted Pelosi’s comment that $1,000 bonuses resulting from the GOP tax bill are “crumbs.” They seized on the comment to claim Democrats are out of touch with working-class voters who flocked to Trump in 2016.

Republicans had their own slip-up over the weekend, when House Speaker Paul Ryan of Wisconsin highlighted on Twitter a school secretary benefiting from the Republican tax overhaul, then deleted the tweet after online criticism that he was cheering a paltry pay increase of $1.50 a week. Democrats rushed to slam Ryan for the move.

Democrats also argue they benefit because Trump is an inconsistent foil. They noted that during his tax speech this week, he accused Democrats of being “un-American” and maybe even treasonous for failing to applaud him during his State of the Union address.

Even as Democrats talk about the need to press an economic message, Russia is never far from mind.

Senate Democrats trooped to the Senate floor this week to attack Trump and other Republicans for what they called a smear of the FBI and other law enforcement agencies. After a Republican memo released last week criticized the FBI’s handing of the investigation, Democrats have offered their own memo and pushed for its release.

Some Democrats stressed that anti-Trump was a winning message.

“There is so much antipathy to Trump where I live, that I don’t think you can (put) his name up enough,” said Democratic Rep. Gerry Connolly, whose Northern Virginia district is just outside Washington.

“Frankly, I’m not really counting on the Democrats being able to help me,” said McCaskill, who is seeking her third term in a state Trump won by 18 points. “I’m counting on me getting out and listening to Missourians and talking about things that matter to them.”