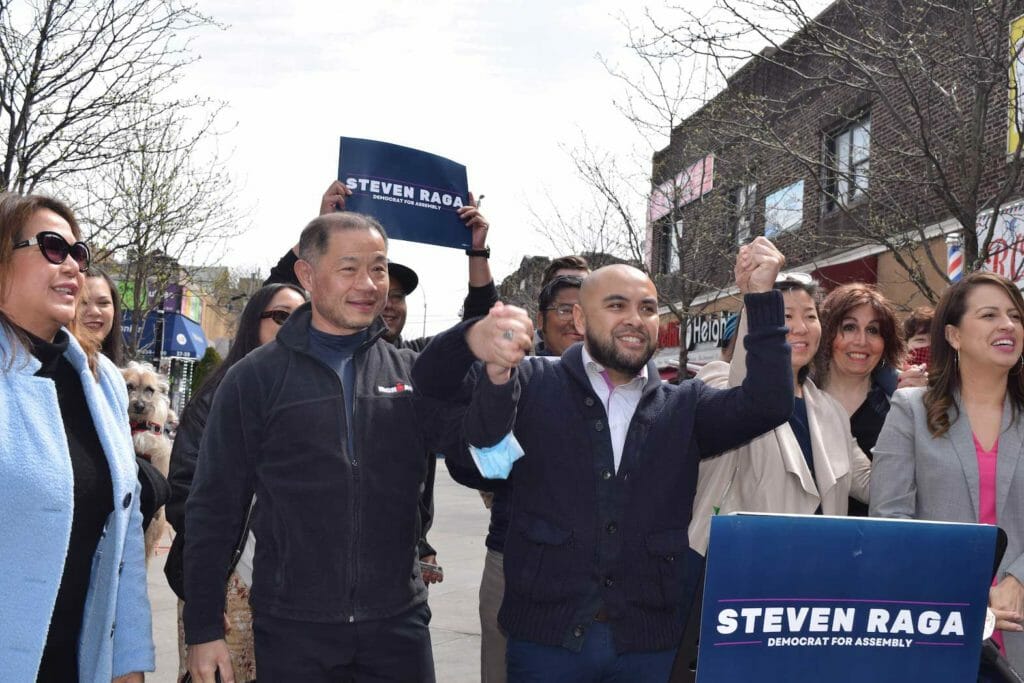 The Fil-Am candidate Steven Raga (third from left) has a team of community leaders and members from the Chinese, Filipino, Nepali, Bengali, Ecuadorian, Colombian, Mexican, and many other diverse communities in Queens to help in his bid for the NY Asssembly. CONTRIBUTED

NEW YORK—With just about five weeks to go, Assembly District 30 Democratic candidate Steven Raga and his team are working double time to get more people from minority and other communities to register as voters before the June 13 deadline for the primaries.

Although the Filipino American candidate is well-endorsed by Asian American and LGBTQ leaders, who stood by his side on Diversity Plaza when he declared his candidacy for the District 30 seat last April 23, ultimately it is the votes of minority communities that would determine if Raga could make it as the first Filipino American elected official in New York.

“Our team is conducting outreach and talking to our communities here in Assembly District 30, encouraging them to register to vote,” Raga told INQUIRER.net. “We have a diverse team of community leaders and members from the Chinese, Filipino, Nepali, Bengali, Ecuadorian, Colombian, Mexican, and many other diverse communities in Queens that will help us accomplish this goal. As a community, we must claim our political and voting power in this district in order for our voices to be heard and fought for in Albany.”

Raga was selected to replace State Assemblymember Brian Barnwell on the ballot after the latter suddenly abandoned his re-election bid. He had worked as Barnwell’s chief of staff for four years before moving on to AARP as a senior advisor and later, to serve as regional manager for policy and advocacy at the Susan G. Komen Breast Cancer Foundation. Currently the executive director of Woodside on the Move, Raga ran for the District 26 council seat last year but lost the bid.

Meng described Raga as the best choice for the community because of his proven track record as a dedicated and passionate public servant. 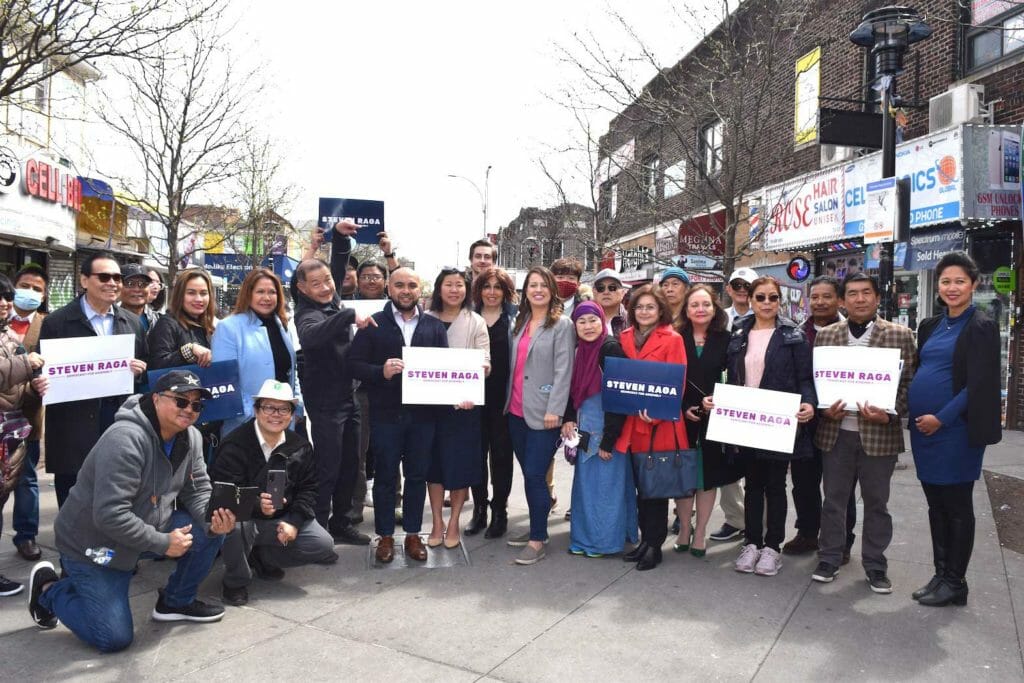 Joined by Congresswoman Grace Meng, State Senator John Liu, and Assemblymember Catalina Cruz as well as a diverse group of community leaders and supporters, Raga committed himself to representing the community that he grew up in. CONTRIBUTED

Sklarz likewise praised Raga as a worthwhile candidate. “As a district leader in the 30th Assembly District, I am proud to support Steven Raga for Assembly. He is smart, educated, passionate, and experienced. He knows our neighborhood and our communities. He will be the best candidate for our portion of Queens while in Albany,” she told INQUIRER.net.

“Throughout my service with him as NaFFAA’s national chair, Steven Raga has always been an embodiment of integrity and servant-leadership,” Flores said. “We are proud that he is taking his light to a higher place, running to represent Assembly District 30. His long track record in government and the non-profit sector, love for his people, and life of service walking on the streets of his own district makes him a great candidate to represent the people in Assembly District 30. In NaFFAA, we empower individuals by giving them a voice, and Steven has been very good at empowering people through his service and actions, serving as a national board member for our organization.”

The NaFFAA leader noted that he was endorsing his good friend and colleague in an individual capacity.

“He is one who is very knowledgeable about past and current issues and one who truly understands the spirit and the needs of that district,” Flores added.

Community activist Lara Gregory, who is the founder of Filipino Americans for Racial Action and is a Queens community board 4 member, also cited Raga’s qualifications.

“At a time that the need for Asian American representation in New York leadership has become obvious, Steven Raga’s candidacy for State Assembly District 30 is timely and historic. His experience as chief of staff of the Assembly Member [Barnwell] and his knowledge of the needs of the district qualify him for the post. Our AAPI community is evolving and realizing that in order to have a seat at the table, we need to bring our bangko [wooden stool],” she said.

For Kinding Sindaw founder Potri Ranka Manis, Raga’s candidacy is more of an opportunity for the Filipino American community. “Steven Raga will bring the AAPI [Asian American and Pacific Islanders] particularly Filipino Americans, Filipino immigrants the visibility and the seat at the table that Filipinos deserve. Filipinos have been serving New York City for years and need a chance to be heard and get the budget that is needed to continue the [social] services in a more empowered position,” she said.

“Never have we had a more articulate, compassionate, hardworking and qualified political candidate in New York City than Steven Raga,” Lewis said.

De Leon, who served as Philippine consul-general to New York from 2011 to 2016, noted Raga’s firm grasp of community issues. “Steven will hit the ground running if he wins. He has a firm grasp of the local issues facing the community,” he said.

Aside from his executive role at Woodside On the Move, Raga is an advisor for the United States Civil Rights Commission, a member of the Queens District Attorney Commission for Asian American Affairs, and is a board member of NaFFAA, Western Queens Community Land Trust, the National Urban Fellows Alumni, Queens Community Board 2, Queens LGBT Pride, and Pilipino American Unity for Progress (UniPro), which he founded in Woodside in 2009.