Does cryptocurrency collapse pose a threat to the financial system?

Does cryptocurrency collapse pose a threat to the financial system?

On Tuesday, bitcoin fell briefly below $30,000 for the first time in 10 months, while cryptocurrencies overall have lost nearly $800 billion in market value in the past month, according to data site CoinMarketCap, as investors fret about tightening monetary policy.

Compared with the Fed’s last tightening cycle which began in 2016 crypto is a much bigger market, raising concerns about its interconnectivity with the rest of the financial system.

HOW BIG IS THE CRYPTOCURRENCY MARKET?

In November, the most popular cryptocurrency, bitcoin, hit an all-time high of more than $68,000, pushing the value of the crypto market to $3 trillion, according to CoinGecko. That figure was $1.51 trillion on Tuesday.

Bitcoin accounts for nearly $600 billion of that value, followed by Ethereum, with a $285 billion market cap.

Although cryptocurrencies have enjoyed explosive growth, the market is still relatively small. 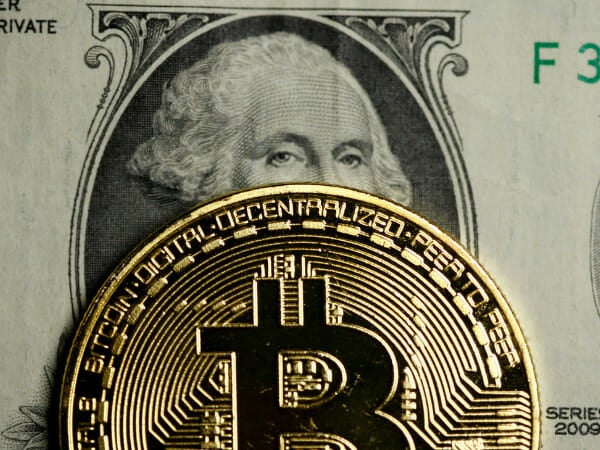 A Bitcoin and Dollar note are seen in this illustration picture taken September 27, 2017. REUTERS/Dado Ruvic

The U.S. equity markets, for example, are worth $49 trillion while the Securities Industry and Financial Markets Association has pegged the outstanding value of U.S. fixed income markets at $52.9 trillion as of the end of 2021.

WHO OWNS AND TRADES CRYPTOCURRENCIES?

Cryptocurrency started out as a retail phenomenon, but institutional interest from exchanges, companies, banks, hedge funds, and mutual funds is growing fast.

While data on the proportion of retail versus institutional investors in the crypto market is hard to come by, Coinbase, the world’s largest cryptocurrency exchange, said institutional and retail investors each accounted for about 50% of the assets on its platform in the fourth quarter. 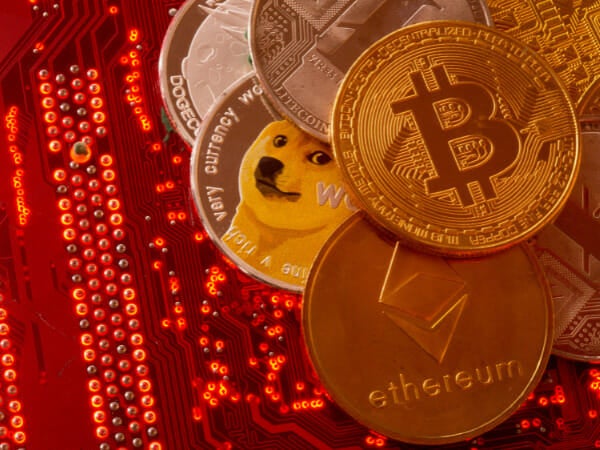 Most of the bitcoin and Ethereum in circulation are held by a select few. An October report from the National Bureau of Economic Research (NBER) found that 10,000 bitcoin investors, both individuals and entities, control about one-third of the bitcoin market, and 1,000 investors own approximately 3 million bitcoin tokens.

Approximately 14% of Americans were invested in digital assets as of 2021, according to University of Chicago research.

COULD A CRYPTO CRASH HURT THE FINANCIAL SYSTEM?

While the overall crypto market is relatively small, the U.S. Federal Reserve, Treasury Department, and the international Financial Stability Board have flagged stablecoins – digital tokens pegged to the value of traditional assets – as a potential threat to financial stability.

Stablecoins are mostly used to facilitate trading in other digital assets. They are backed by assets that can lose value or become illiquid in times of market stress, while the rules and disclosures surrounding those assets and investors’ redemption rights are murky.

That could make stablecoins susceptible to a loss of investor confidence, particularly in times of market stress, regulators have said.

Cryptojacking – Are You Mining Cryptos Without Knowing It?

That happened on Monday, when TerraUSD, a major stablecoin, broke its 1:1 peg to the dollar and fell as low as $0.67, according to CoinGecko. That move partly contributed to bitcoin’s fall.

Although TerraUSD maintains its tie to the dollar through an algorithm, investor runs on stablecoins that maintain reserves in assets like cash or commercial paper could spill over into the traditional financial system, causing stress in those underlying asset classes, say regulators.

With more companies’ fortunes tied to the performance of crypto assets and traditional financial institutions dabbling more in the asset class, other risks are emerging, say, regulators. In March, for example, the Acting Comptroller of the Currency warned that banks could be tripped up by crypto derivatives and unhedged crypto exposures, given they are working with little historical price data.

Still, regulators overall are divided on the size of the threat a crypto crash poses to the financial system and broader economy.

(Reporting by Hannah Lang in Washington; Editing by Michelle Price and Matthew Lewis)