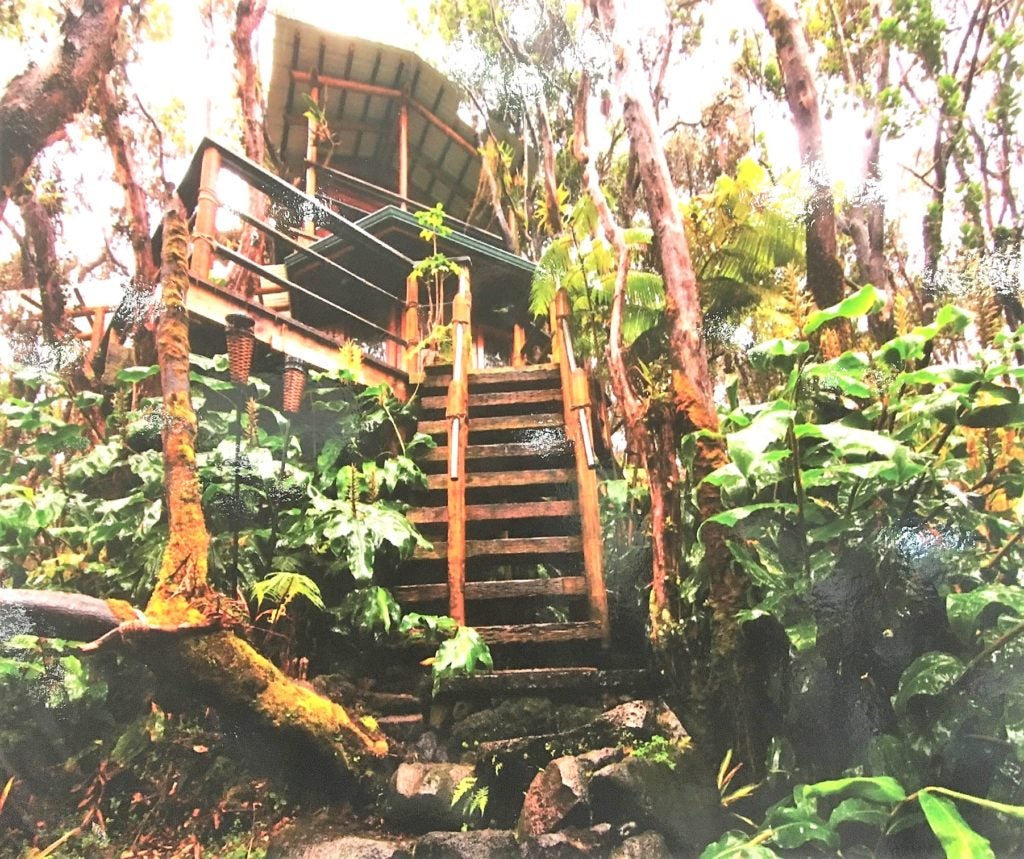 Among the coveted raffle prizes at the New York Times Travel Show include an overnight stay at a treehouse, and at a hostel of choice. INQUIRER/ Carol Tanjutco.

Today’s new breed of travelers are adventurers who seek the chance to stay in a treehouse or share friendly hostels, meet new friends, and discover sustainable tourism trends and hotels that value conservation of natural resources. Off the beaten path destinations are popular; how to get there in the most economical and earth-friendly manner is sometimes part of the package.

Asian countries with such destinations are not commonly advertised by travel agents and airlines because these places are reachable by interisland boats only. Sustainable travel is not on your usual “bucket list”; it involves full cultural immersion and interaction with local inhabitants who may share unique art, traditions and once-in-a-lifetime culinary feasts. 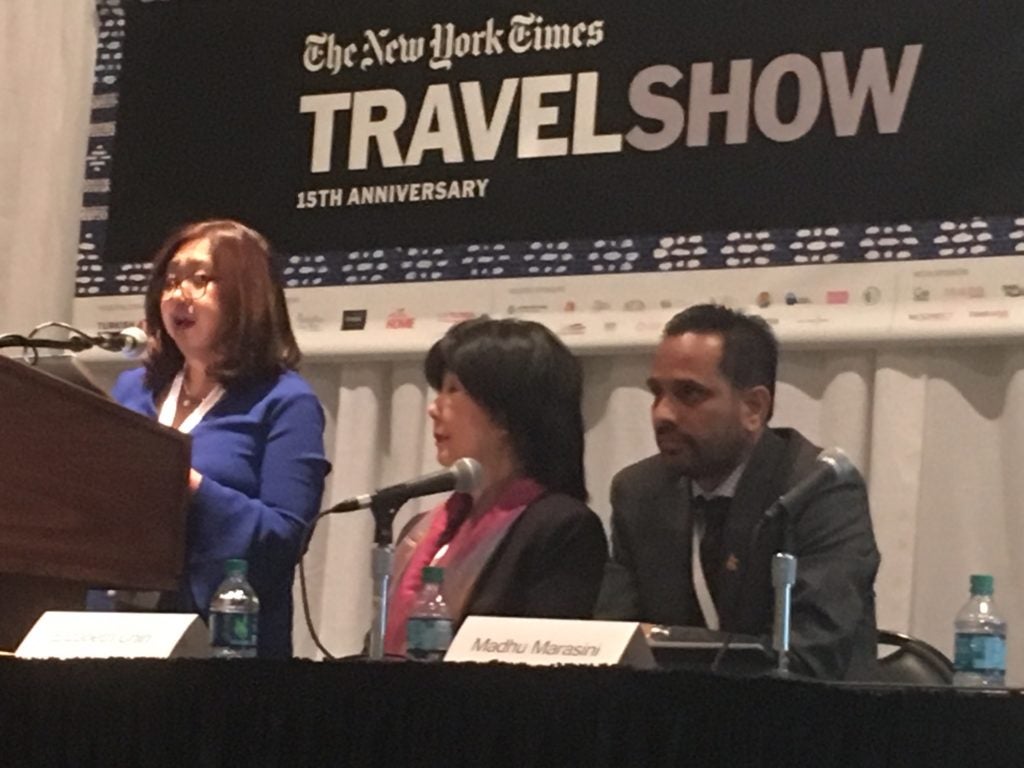 Pacific Asia Travel Association (PATA) invited Japan, China, Nepal, Thailand, Korea and the Philippines to showcase their hidden gems unknown to mass-market tourism or overdevelopment. Interestingly, of all the Power Point presentations, two countries stood out in raising the bar for travel professionals during the trade day seminars.

Japan laid emphasis to its “Golden Route” between Kyoto and Hiroshima, accessible by bullet train between 2 and 4 hours. In another route, the Matsushima islets in Tohoku region appears to have some similarity with the Philippines’ Hundred Islands. Japan is the site of the upcoming 2020 Summer Olympics and Paralympics, as well as the 2019 Rugby World Cup.

Philippines presented a compelling video, which was rushed mainly for this event by Manila and New York teams. Given a brief timeline for each presenter, Philippine Department of Tourism NY Director Susan Del Mundo jumped right into a visually stunning compilation of the country’s top 10 destinations, including its cultural backround and roots from a mix of Malay, Chinese, Spanish and American, with emphasis on English as one of two official languages spoken out of 175 languages and dialects. 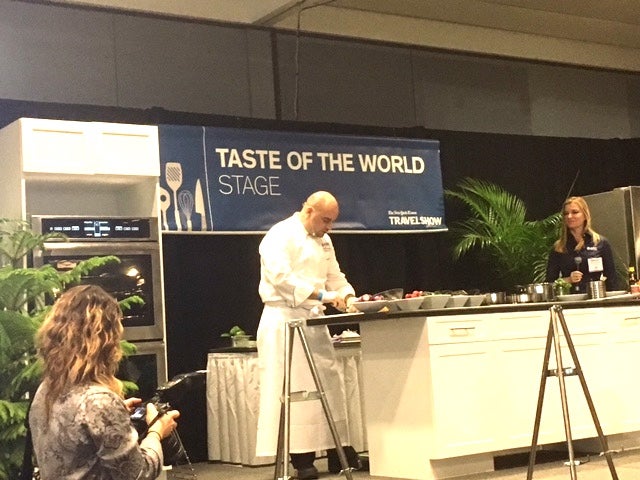 A stage for the Taste of the World featured several chefs from different countries. In photo MSC Cruises prepared generous samplings of its famous appetizer scallops ceviche and a sumptuous coffee-crusted sirloin in chocolate demiglace.  INQUIRER/Carol Tanjutco.

It was a quick educational tour of the country that highlighted historical facts, the UNESCO Heritage Sites in the North, from the Banaue Rice Terraces, the 16th century city of Vigan to baroque Churches. Central Philippines boasted beaches, 40,000 kms of corals reefs, 25 shipwreck dive sites and romantic islands that made it to Conde Nast Traveler magazine as Top Three in the world: Boracay, Cebu and Palawan. Travel + Leisure magazine has Palawan as No. 1 and Boracay as No. 3. Palawan’s subterranean river made it as one of the New 7-Natural Wonders of the World. Puerto Galera, off the beaten path, is also promoted as the best dive site in the country.

In Southern Philippines, Davao as gateway to Mindanao and the surfers’ paradise of Siargao are the latest destinations awaiting discovery by the rest of the world. Home to the critically endangered Philippine eagles, Davao has recently emerged as a must-see location for the international traveler. While Manila is plagued with unsavory news about drug problems, the president’s own hometown of Davao is a chartered city operating progressively with its central 911 system, which makes it  an ideal and safe haven for tourists.

Traveling for 20 hours to Asia can be physically taxing. In this year’s event, an amazing discovery was launched that is said to cure jetlag. A company called Uplift Ventures designed a solution intended to end jetlag naturally using a scientific app, a result of combining neurology and acupuncture by applying acupressure points. A detailed demonstration showed how to reset body clock by an application of algorithms invented by Dr. Charles Krebs. The company video demo shows more.

The two-day show opened to the public hosted culinary events, wine and food tastings, cultural shows, bonzai arrangement, crafts and the sights and sounds of nations around the globe. There were daily drawings of free roundtrip airfare by Turkish Airlines, massage treatments, DNA kits, the latest in travel gadgets and theft-proof pants and jackets for a seamless traveling experience. Every year, something new and exciting comes along, a good enough reason to look forward to the next show in January 2019.