Whether you’re reheating slices of pizza, cooking chicken, or preparing mac and cheese, numerous recipes require a conventional oven or an air fryer. Thanks to their countless uses for so many meals, these two devices have become highly sought-after. But how do you know which culinary tool to use in your kitchen? Let’s find out more.

What Is An Air Fryer? 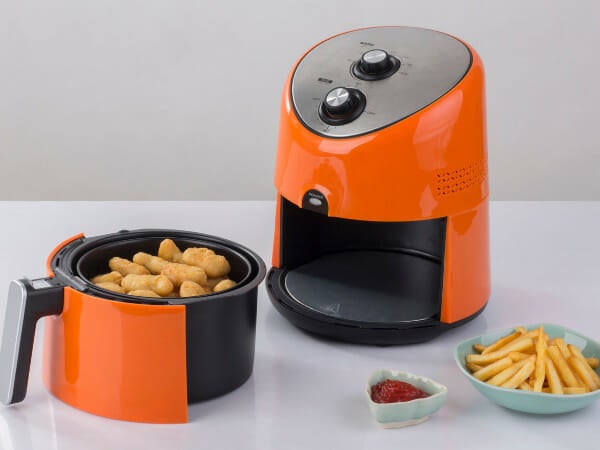 The air fryer has become a popular appliance in many kitchens. It is arguably the healthiest cooking appliance when it comes to fried foods like pastries, chips, and others. An air fryer works by using very hot air to fry food with minimal use of oil.
It has become a great alternative to deep-frying food, especially because of the potentially high-fat content that food dipped in oil comes with. Rather than sinking your chips or chicken into oil in a pan on a stove, putting it in the air fryer will require little oil use.
Because air frying uses less oil than traditional frying, most health-based recipes will point you to
an air fryer.

What is A Conventional Oven?

The conventional oven has been popular in restaurants and kitchens for a long time. Baking is arguably one of the oldest cooking methods in the world, and today, conventional ovens are often used to bake food. Everything from cakes to potatoes can be baked in such an oven because it uses minimal oil like the air fryer.
Conventional ovens work by heating the air inside the oven to cook the food. Most baking
recipes are written based on conventional ovens, which isn’t likely to change any time soon.
Which is better? A conventional oven or an air fryer?
This mostly depends on the meal you intend to cook. While both appliances and their uses are similar, here are the key differences:

An air fryer is relatively small compared to a conventional oven. Most air fryers are compact and fit right onto the counter, even in smaller kitchens.
On the other hand, Ovens require much more space and are usually embedded in-between the kitchen cabinets. You would have a slightly difficult time finding space for an oven in a small kitchen. 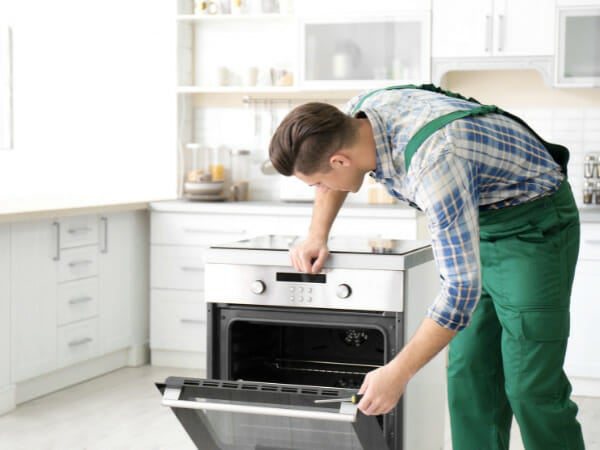 The air fryer circulates hot air very quickly in order to cook the food and make it crispy, which is what frying does. The oven works by simply heating the air around the food, within the oven, the heat is dispersed slowly and evenly.
While the air fryer cooks food much faster, the oven will take more time to get food ready. The compact size of the air fryer also makes it easier for the hot air to circulate rapidly, unlike the larger oven.

If you need to prepare a turkey for Thanksgiving, your best option would be to use the conventional oven. When preparing large meals, the oven ensures that the food is cooked evenly, and a lot can be cooked or baked at the same time.
If you’re preparing a quick meal for two, you will find that an air fryer would be the better option. If you’re cooking minimal serving portions, you do not need a large appliance that would take time for the air to get around.

What Are the Cons of An Air Fryer?

While an air fryer is a brilliant addition to your kitchen, there are some disadvantages to using one.

They Are Difficult to Clean

If you don’t clean your air fryer immediately after use, cleaning out food residue and scorched food bits will become a major chore. Also, every part of the air fryer needs cleaning, including the pan and the frying basket.

They Can Be Too Small

If you have a large family, cooking with an air fryer will be next to impossible. Even the larger air fryers are too small to use in food preparation for more than five people. Also, air fryers really can’t get bigger, or they’ll cook food slower.

While some brands create quieter air fryers than others, it is very hard to miss the noise when an air fryer is turned on. Air fryers use ventilators to suck air, which is then circulated within the appliance. The noise produced by the ventilators is similar to the sound of a hairdryer or a vacuum cleaner.

Do Air Fryers Consume So Much Electricity? 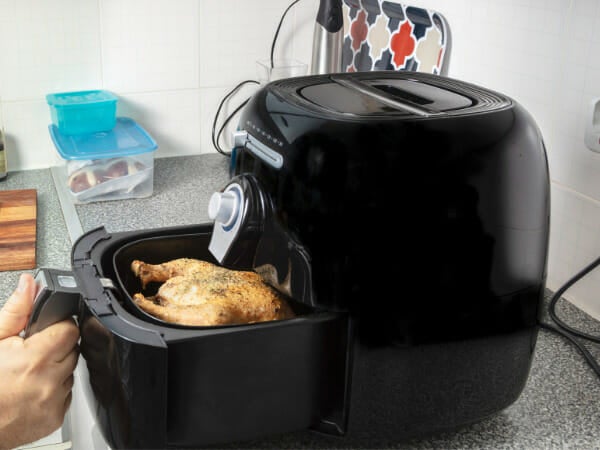 Compared to the conventional oven and many other large kitchen appliances, the air fryer does not consume a lot of electricity. This is because the air fryer cooks food much faster than the oven, so it will stay on for a shorter period. Apart from this, ovens often have to be preheated before the food starts getting cooked. Similarly, deep fryers have to boil the oil before they can start frying food.

The key difference between both appliances is in their method of heating. With air fryers, the air is heated and circulated to cook the food, but microwaves use electromagnetic radiation. The microwaves generated by your microwave vibrate water molecules in your food, which creates heat.
Other differences include time and recipe. Microwaves are generally used to quickly thaw and reheat food rather than cook it. That’s why you can use your microwave to get hot noodles within a minute. If you need to cook food, it’s best to use an air fryer instead of a microwave. The air fryer will also cook the food more evenly.

Ovens and air fryers on Amazon

If you’re looking for great options to suit your kitchen and improve your cooking skills, here are a few brilliant appliances you can purchase.

This is a smart oven with different cooking functions depending on what you would like to cook or bake. This Amazon best-seller has enough space for a 13-inch pizza and has an LCD that you can use to pick your preferred function.
It uses a maximum of 120 volts as well as 1800 watts. It includes a 12 x12 baking pan alongside a 13-inch pizza pan.

This is arguably one of the best ovens for its price. It is multi-functional, which means you can set it to toast, bake or even broil, depending on your preference. At just 2.2 pounds, it is lightweight and has enough room for a 9-inch pizza.
It uses just 1100 watts of power, and for its’ relatively low price, this toaster oven maxes out at 450 degrees F.

This Amazon best-seller has become highly popular for its ability to cook food efficiently. There are as many as 13 different functions, which are all easily accessible. Along with its big size, capable of cooking a five-pound chicken, its components are removable and dishwasher-safe.
It’s 11.9 pounds, which is quite heavy when you compare it to other brands, but that’s due to its large capacity.

Do I need to preheat the air fryer?

No, this isn’t necessary, as the air fryer heats faster than an oven.

Why do I smell smoke in my air fryer?

Your food might be burning, but there’s a good chance that It needs to be cleaned. Burnt residue can cause the air fryer to smoke, so clean it regularly.

How do I stop food from sticking to my air fryer?

Spraying the air fryer basket with a little vegetable oil before you put it in the food will stop it from sticking.

Air fryers are an amazing part of today’s kitchen. They can cook food safely and quickly, without using much oil to fry. Conventional ovens are similar to air fryers in that they both use hot air for cooking food. However, ovens are often slow to heat up, while air fryers heat up quickly.
Before deciding between an air fryer and an oven, it mostly depends on what you have to cook or bake. An air fryer would be great for foods that can be cooked to crisp quickly. For pastries and bread, an oven would be the preferred option.

Top Creatine Supplements to Maximize Your Workouts
Is Pet Cloning Real?
Best Mouthwash Tablets
Is Honey Vegan and Can I Eat It?
Water Filter Pitcher: The secret to having clean water at home
What is a Dash Cam and Why Should I Have One?
Can an Air Purifier Keep Your Home COVID-Free?
LATEST

DID YOU KNOW?
The Best Kindle of 2022: Which one should you buy?
A Beginner’s Guide to Buying a Vacuum Cleaner in 2022
Island Hopping in Tulum: The 12 Best All-Inclusive Tulum Resorts
How to Dispute a Debt and Win | Simple Tactics
The 12 Best Lat Exercises for Muscle Growth
Countdown to summer: tips for learning how to surf