Ketanji Brown Jackson confirmation is justice for all

Ketanji Brown Jackson confirmation is justice for all 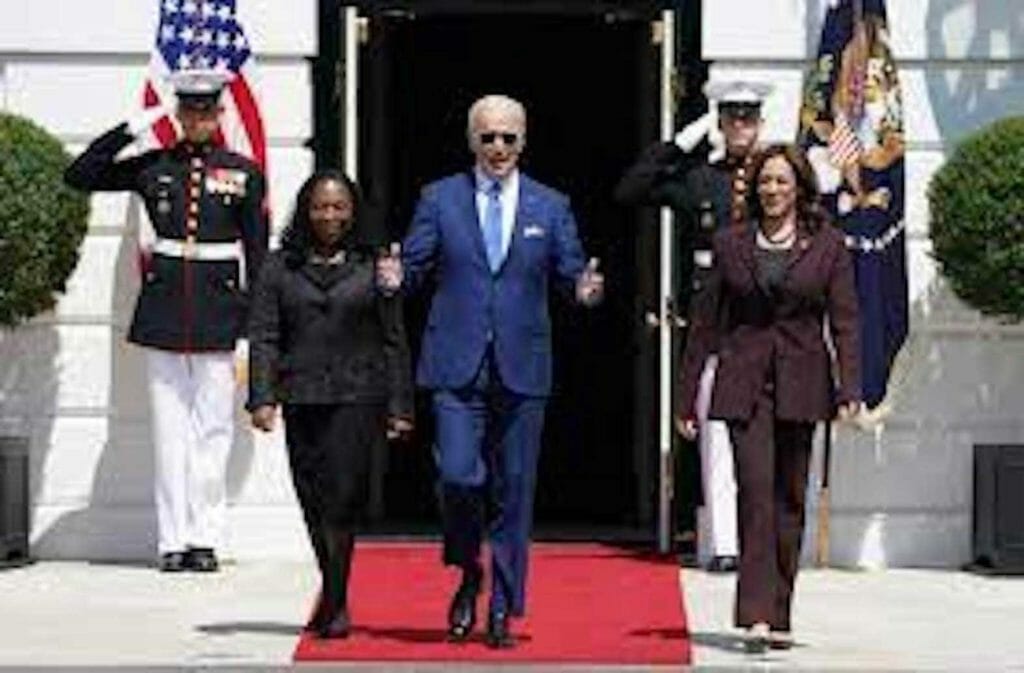 U.S. President Joe Biden walks out of the South Portico of the White House with Judge Ketanji Brown Jackson and Vice President Kamala Harris as they arrive for a celebration of Judge Jackson’s confirmation as the first Black woman to serve on the U.S. Supreme Court, on the South Lawn at the White House in Washington, U.S., April 8, 2022. REUTERS/Kevin Lamarque

Over the moon? What’s higher than that. A barrier has been broken in America. And that means for Filipinos as well. Don’t doubt it for a second.

Of course, Bucha and the atrocities committed by Russia in Ukraine must still hold the focus of the free world. We only interrupt our attention on life and death history with even more history.

And so we do now in order to cheer a momentous breakthrough for democracy in America.

Ketanji Brown Jackson is the new 116th Associate Justice of the Supreme Court of the United States.

“There are moments that people go back in history and they’re literally historic; consequential, fundamental shifts in American policy,” said President Biden from the South Lawn of the White House, the day after the historic confirmation.

That’s what having the first black woman to be appointed to the Supreme Court means. There will be a change in the conversation when it comes to justice in America. And it was a long time coming.

“People of every generation of every race of every background felt this moment,” said Biden, who was beaming as he was about to introduce the new high court member last Friday.  “They feel a sense of pride and hope and belonging and believing and knowing the promise of America includes everybody, all of us.”

And then Jackson spoke to the nation for the first time as Justice Jackson.

“No one does this on their own,” Jackson said. “The path was cleared for me so that I might rise to this occasion, and in the poetic words of Dr. Maya Angelou, I do so now. ‘While bringing the gifts my ancestors gave, I am the dream and the hope of slaves.’”

Jackson got a rousing applause for remembering with humility where she fits in history.

“And so as I take on this new role,” she continued, “I strongly believe that this is a moment in which all Americans can take great pride.”

She’s right. All Americans. All Filipinos in our nation. Her ascent is the wonder of our American democracy. Jackson’s confirmation shows that after 232 years, even in the stodgy Supreme Court, it is still possible to break barriers and improve upon our nation’s sense of inclusion.

And to think, how hard it was to get to this happy place.

By a 53-47 vote, the high-water mark of bipartisanship in our dismally divided country, Jackson was confirmed by the Senate last Thursday, and will take Justice Stephen Breyer’s seat upon his retirement this June.

Of 115 who served on the court, there have been just five women, two Blacks, and no Black women, said Leahy.

Those facts have helped to define the privilege of white supremacy in America. A privilege that is quickly being washed away.

No one has looked like Ketanji Brown Jackson. Not in the institution of the Supreme Court of the United States. Not until April 7, 2022.

But it’s not just about Jackson’s race or ethnicity. Leahy emphasized that Jackson was more than well-qualified; she “earned” the right to be on the Supreme Court.

Durbin added more historical context. When the Supreme Court first met in the Capitol in 1801, there were one million slaves in a nation of five million people. And neither blacks nor white women had a constitutional right to vote. Black women had no place in the court, and could only come in at night to clean, he said.

Let me add our context too. At the time, there were notably Filipinos in Louisiana, but there was no Asian America to speak of.

Durbin then briefly touched on the evolution of America, from the bloody civil war to the decades-long efforts to break down racial barriers.

“We are beginning to write another chapter in our nation’s quest for equal justice under the law,” said Durbin. “And that chapter begins with three letters, KBJ, with Judge Ketanji Brown Jackson’s confirmation to the highest court in the land.”

Durbin then recalled how this week, 54 years ago, Dr. Martin Luther King was shot and killed in Memphis. And then he quoted from King’s speech at the Mason Temple: “I’ve looked over and I’ve seen the promised land. I may not get there with you, but I want you to know tonight that we as a people will get to the promised land.”

And now, in a way we have. The KBJ era has officially begun.

For history, most of the Senate was gathered at their desk for the roll call vote that teeter-tottered back and forth. Fortunately, the votes were already known. Deadlocked at 50-50, three Republicans, Lisa Murkowski (R-Alaska), Mitt Romney (R-Utah), and Susan Collins (R-Maine), had announced their decisions to vote for KBJ, for history, for justice. And they came through. They didn’t join Republican partisans like Lindsay Graham, Ted Cruz, and Tom Cotton, who treated the confirmation process as if it were a hazing to an all-white men’s club.

They had questioned her for 24 hours, in Senate Judiciary hearings that seemed more like an interrogation. Republican Senators, auditioning to be the next Trump, hammered away on KBJ. But the best they could do was bring up her sentencing on child pornography cases, as if that made her soft on crime? A nominee supported by national police organizations representing both chiefs and the rank-in-file is not soft on crime.

But they kept it up right until this week. Sen Tom Cotton, touching on the Ukrainian situation, said Jackson might have defended Nazis accused of war crimes. Is that not the height of smears? But that is the rhetoric of white supremacists losing their grip.

Even on the floor of the Senate, when Democrats had gotten to the vote, Republicans couldn’t stand it. Graham cast his “No” vote from the cloak room. He had previously voted for KBJ when she was up for confirmation. Not this time. His fellow South Carolinian, Tim Scott, an African American, also stuck with Republicans and voted against Jackson. Kentucky’s Rand Paul made a scene, coming late to delay the confirmation as much as possible. Dressed informally, he cast the 47th “No.” One last rude and immature strike at the woman they must now call Justice Jackson.

KBJ’s ascent means one thing to AAPIs, specifically when it comes to the court. Next vacancy. We got next. And then the court will have the look it needs to embody equal justice under the law.

After KBJ, the first Black female, we should expect an AAPI male or female, don’t you think?

That would make it the most diverse court in SCOTUS history. And then it really will be a court that looks like America.