Suspect stands trial for murder of Filipino missing in Canada

Suspect stands trial for murder of Filipino missing in Canada 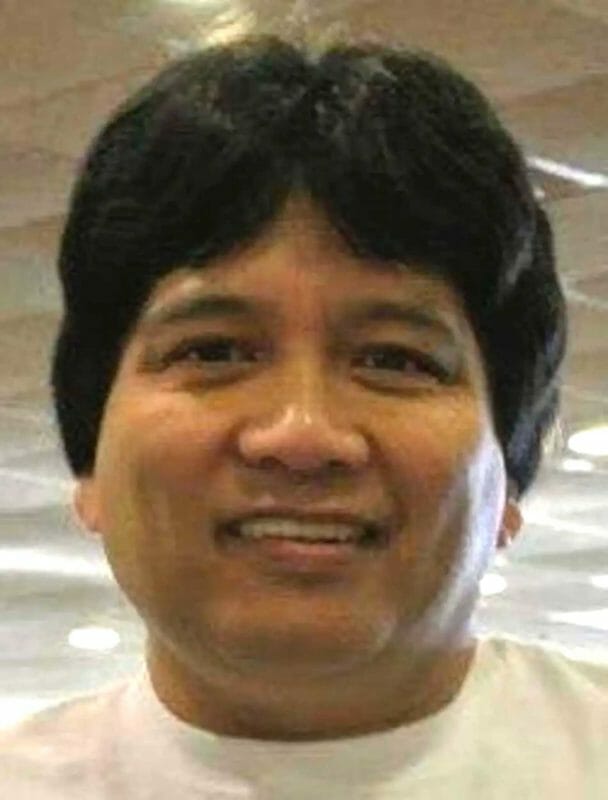 Eduardo Balaquit’s body has not been found even as police charged a man for his disappearance three years ago. (Police photo)

The accused, Kyle Alexander Pietz, 36, has pleaded not guilty to manslaughter and is presumed innocent. The Crown alleges he caused Balaquit’s death during a robbery.

Balaquit, 56, disappeared on June 4, 2018 and his body has not been found despite an extensive search that included Arborg, Manitoba.

Constable Christine Mazerolle, a member of the Winnipeg Police Service (WPS), testified Tuesday she was sent to the Balaquit family’s home on the morning of June 5, 2018, after they filed a missing person report because Balaquit didn’t return home from work the night before.

The officer testified she then went to Westcon Equipment on Keewatin St. where Balaquit worked as a cleaner. The jury was told his van was found parked at a neighboring business.

“We observed that the front passenger side window was smashed,” Mazerolle testified.

During cross-examination by Pietz’s lawyer, the officer told the court: “There was a hole in the window big enough for my partner to put his arm through.”

Mazerolle testified that officers found safety glasses, some clear plastic, a piece of pipe outside the vehicle as well as a cell phone inside and that Balaquit’s son Edward attended the scene.

“We believed that phone was his father’s,” Mazerolle told the court.

“It’s breaking my heart all the time,” Eduardo’s wife, Iluminada, tearfully testified on the opening day of the trial, CBC News reports.

Crown attorney Vanessa Gama, speaking Monday morning, told the 14-member jury that the evidence presented in the trial will show that Balaquit is dead, and that Pietz is responsible.

“This is a case about a man driven by desperation, and the desperate measures he took on June 4, 2018 that cost Eduardo Balaquit his life,” Gama said.

In her opening statement, Gama said Balaquit’s life of “consistency and routine” left a trail for police following his disappearance on the night of June 4, 2018 — and that trail led directly to Pietz, according to the CBC.

That trail included a mysterious trip to Arborg, Manitoba, and back the night of Balaquit’s disappearance. Two of his debit cards were used at a 7-11 on Ellice Avenue, with correct PINs, and money was withdrawn.

“This is a case about financial desperation,” Gama told jurors.

Gama contrasted the characters of Balaquit and Pietz.

Balaquit was a hard-working man who owned his own cleaning business while working a full-time job he had held for more than 20 years, she said. Pietz, on the other hand, “was spiraling out of control.”

“By June 4, 2018, payments were bouncing, creditors were calling, and he had absolutely no money in his bank account. For Kyle Pietz, it was financial rock-bottom,” Gama said.

One of the businesses Balaquit cleaned was Westcon Equipment on Keewatin Street, where Gama said Pietz previously worked.

On April  24, 2018, there was a break in at Westcon and $1,700 were taken from a petty cash box. Pietz’s fingerprint was found on a pamphlet used to jimmy the lock into the building, Gama said.

Shortly after the break-in, Pietz stopped showing up to work.

On June 4, 2018, Balaquit went to clean the offices at Westcon. That same day, near closing time, an employee noticed Pietz’s vehicle circling the building, Gama said.

“Mr. Balaquit entered his alarm code at 6:05 p.m., and he was never seen or heard from ever again,” Gama said.

Police spoke to Pietz the day after Balaquit’s disappearance. Pietz told police he had been with Balaquit, Gama said.

Pietz became a suspect and police searched his home. They found pivotal evidence of what happened to Balaquit the night he went missing, Gama said.

Although the prosecutor says evidence will show who was responsible for Balaquit’s death, and when, where and why it occurred, it may not show how he died, Gama said.

In addition to his wife, the court heard from Balaquit’s two adult sons, Edward and Erwin Balaquit.

Erwin Balaquit told court that he sometimes helped his father clean at Westcon, but that he had never heard of Pietz before.

He said it was unlike his father not to call if he was going to be home late, and his family began searching after he didn’t return. The next day, he found his father’s van with the passenger window smashed.

Iluminada Balaquit said her husband had no history of mental health problems, had no medical issues, and had never gone missing before.

“He was always happy,” she said. “You’re never going to see him down.”

She said Balaquit was a dedicated family man who always celebrated birthdays and anniversaries, and was preparing for their son Edward’s wedding before he disappeared.

The trial is expected to last six weeks.