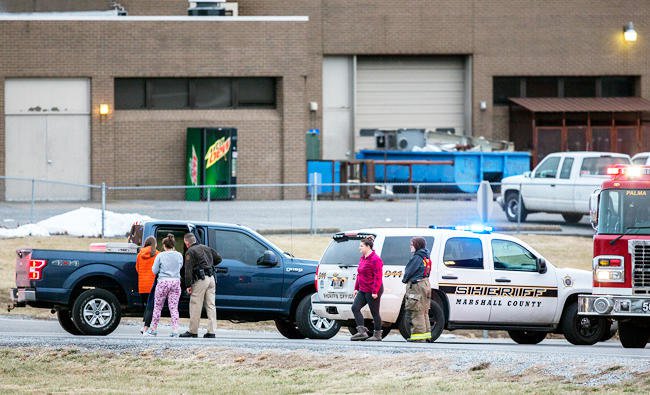 FRANKFORT, Kentucky — Hours after authorities say a 15-year-old student shot and killed two classmates at a western Kentucky high school, a Republican senator in the state’s Capitol rushed to file a bill intended to prevent future tragedies — by putting more guns in schools.

The legislation from state Sen. Steve West would let local districts hire armed marshals to patrol public schools, make citizen’s arrests and protect people from “imminent death or serious physical injury.” Marshals wouldn’t have to be police officers, but school district employees in good standing who have a license to carry concealed weapons.

“I’m going to be beating the drum again. We had this shooting this week. If we do what we did last time and nothing is done, this will come back again,” West said of Tuesday’s violence.

His is one of at least two bills that would allow more guns into Kentucky’s public schools and on college campuses.

They reflect sentiments that have found bipartisan support in a conservative state whose politicians routinely pose in ads with guns, and where the National Rifle Association held its 2016 national convention. The NRA has an outsized influence in many state elections and the resulting gun policy debates in those legislatures.

“You know, we’re in Kentucky,” said Ralph Alvarado, a Republican state senator and medical doctor who co-sponsored West’s legislation. “This debate always comes up, restricting gun use in the state. I’m just adamantly opposed to it. It’s a constitutional right that we have. It’s one of those things that it’s going to be tough to ever get that kind of a concept through.”

Some Democrats think the GOP push for more guns in schools is misplaced. State Rep. Attica Scott from Louisville said she is “definitely an advocate for gun safety and to me more guns is not the answer to gun violence.” Scott has filed legislation that would ban those convicted of hate crimes from carrying a gun and let local governments pass laws requiring gun sellers to use “responsible business practices.”

“We are training our babies how to react when faced with an active shooter, but we are not taking action on gun safety,” Scott said told her colleagues in a speech on the House floor this week. “We are sending prayers and thoughts to kids who are clinging to the last bit of faith they have in the system of government that is supposed to keep them safe