’Maze Runner: The Death Cure’ ramps up the action

’Maze Runner: The Death Cure’ ramps up the action 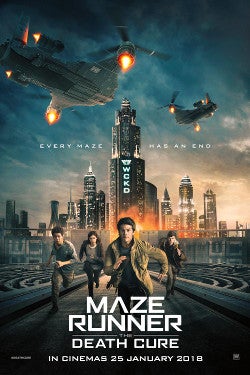 In “The Maze Runner” Thomas (Dylan O’Brien) wakes up as he is being delivered to The Glade.  He has no memory of who he is or why he’s become a member of a community of young people; among them Minho (Ki Hong Lee), lead maze runner; Newt (Thomas Brodie-Sangster), a good friend and advisor; Gally (Will Poulter), a leader and adversary; and Teresa (Kaya Scodelario), the only female glader, with whom Thomas may have a potentially dark history.

Together they’re trapped, surrounded by 200 foot walls and an ever-changing maze. Bad turns to worse when the Gladers’ finally escape The Maze only to discover they’re in the middle of a desolate wasteland called The Scorch. In “Maze Runner: The Scorch Trials,” Thomas and the surviving gladers meet new allies while discovering clues about a mysterious group behind all of their tests, an organization known as WCKD. In “Maze Runner: The Death Cure” the motives of WCKD become clearer. Dr. Ava Paige (Patricia Clarkson), WCKD’s executive director is close to what she believes is a cure for the disease known as The Flare, an infection that has decimated the world’s population. But the cure comes by sacrificing the few young people left in the world who are apparently immune.

In order to free those who’ve been rounded up as test subjects, including his friend Minho, Thomas must now band together with fellow survivors, old and new and take the battle to what may be the last remaining city and the final stronghold of WCKD. He must break into the super-secure WKCD headquarters and try to bring down the organization from the inside. Action reaches new heights in this mission-oriented third and final segment of ‘The Maze Runner.”

“The Maze Runner” was the first of a trilogy of stories based on the James Dashner novels. In the original Maze Runner the involuntary inhabitants of the mysterious encampment known as The Glade were surrounded by an ever-changing maze with 200-foot walls. They’re a colony of young men with a singular goal: escape the glade by solving the maze. When Thomas showed up and shortly after, The Glade’s first girl inhabitant Teresa, everything began to change. The way out led them to the truth; they’re members in an immense and cruel test.

In “Maze Runner: The Scorch Trials” The Gladers, as they’re now known, discovered that once out of the maze they were not the only participants forced to endure tests. There were in fact other mazes, other survivors and they were to learn of the organization that had selected them, WCKD. Thomas, who had become the presumptive leader of the group, didn’t trust the message he was hearing that WCKD was good.

Breaking free from the compound where they’d been housed after being rescued Thomas led the survivors of the original maze and others he had encountered in the new facility out into ‘The Scorch,” a desert wasteland that appeared to be all that was left of the world. Looking for a rumored safe haven, the group became trapped when Teresa, conflicted about WCKD and it’s true mission, gave up the hidden location of the surviving assemblage and a WCKD resistance group known as The Right Arm. Having been betrayed by Teresa, and vowing to save Minho, who had been abducted by WCKD, Thomas concluded ‘The Scorch Trials’ with a single declaration to kill Ava Paige. The woman who had become synonymous with WCKD. When “Death Cure” opens, it’s clear the team have had time to come up with their plan. They’re a different group, organized and on the offensive. It’s a plan so audacious it requires that they steal an entire moving train car in their attempt to save Minho.

“Maze Runner: The Death Cure” picks up roughly six months after “The Scorch Trials” ended. In the final battle of The Scorch the survivors of The Flare, a disease that has devastated the world’s population, have defined their purpose; to find a safe haven away from the influence of WCKD.

The first film with The Maze was all cement and decay. The second story was the sand and rust of The Scorch, and this film, “The Death Cure,” is a world of glass and steel. The whole movie’s really a rescue mission and it’s a special sequence in this exciting trilogy. “Scorch Trials” started at the exact moment that the first film ended. With this film, it been about six months and you can see that these guys have been busy. They’ve taken that time to get organized, to come up with a plane and to go save Minho. You’re in a place where people still band together and they rise up. Where people have an interest in what’s going on around them and they say it and they vocalize it and they fight. People here, they will fight, they will rise up. Having rescued a train car full of young people, all immune to ‘The Flare’, headed for the test labs of ‘WCKD’, the ultimate goal is get everyone to the safe haven. Once again, it’s a place that no one is sure really existed.

The locations are absolutely stunning and unique. It’s a culmination of all three books and “The Death Cure” really brings it all together. It’s an amazing adventure. The design is fantastic. It’s very easy to act on those sets, you know. It’s not like, oh here’s a white wall and over there it just stops and there’s a bunch of people standing around. It really feels like a world that you can inhabit, like the real thing, because it’s all there. You know you can walk down that corridor and there’s another corridor and you can walk into that corridor and there’s a lab and then it brings you back to the other corridor. It’s quite easy to feel it. It’s not only giant but it’s also very specific in that it reflects a modern day dystopian western.