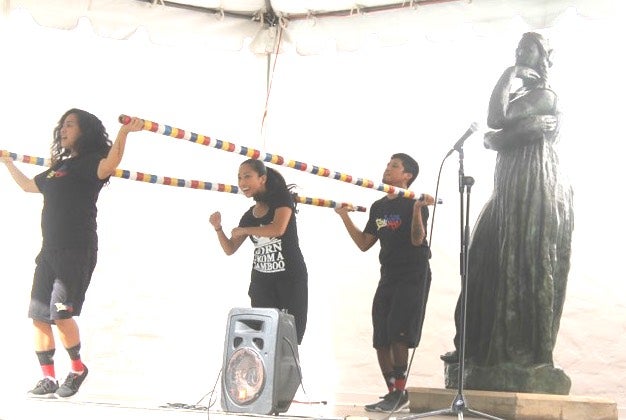 HONOLULU — Growing up, Gabriel Torno enjoyed big family parties, karaoke and Filipino food, but he wasn’t particularly interested in going deeper into his roots. Until college, that is, when Torno first attended Chaminade University of Honolulu and then transferred into the Ethnic Studies program at the University of Hawaii at Manoa.

During his time at Chaminade, Torno naturally searched for organizations to become involved with and came across the Filipino club. He joined because he wanted to see himself as a Filipino and did not really know about the culture. “It was a chance to learn more,” Torno explained.

“One of the things that stuck to me was the dances,” he shared. The club did a lot of traditional Filipino folk dancing, especially the most popular dance, Tinikling. “We did the traditional version and one of the members of the club, who was from the mainland, introduced the idea of doing a modern hip hop Tinikling dance.”

This opened up the minds of the students to the dance and provided the club a different perspective because of the modern twist. It became a cultural fusion that intrigued the club members.

“To do that and incorporate that into something that was cultural, connected us a little bit more to the culture,” Torno stated. “As far as our experience in the club, our generation today is more into pop and hip hop music. It made us a little more proud of the culture and inspired our ethnic identity of being Filipino.”

When Torno decided to transfer universities, he continued to participate in the Filipino student organizations. He eventually started dance workshops and exposed the club to Filipino dances, including the modern hip hop Tinikling. The club members became excited and choreographed a routine, performing it one day. Thus debuted in 2008 Tekniqlingz, a traditional, modern Philippine folk dance group in Hawaii.

From the first time Tekniqlingz showcased their routine, the dance group have received many requests to dance within the University of Hawaii system as well as private events such as weddings and birthdays.

The dance group branched off to different colleges and doing both talent shows and cultural events. Most of the members continue to perform because they enjoy dancing, but they also know that they did it to spread cultural awareness.

“Just recently, we started the process of becoming a nonprofit organization more for the community,” Torno said. “We started doing a lot for the community, like teaching people about Filipino dance, not only to Filipinos but in Hawaii’s community as well.”

Tekniqlingz is now a nonprofit organization, and its members work diligently for the mission of strengthening ethnic identity and cultural awareness through education and the perpetuating Filipino culture through art, music and dance. Tekniqlingz also started a monthly community dance workshop. “I believe there should always be something, or someplace that someone can have access to something Filipino-related,” Torno explained. The organization has held a summer program called

Filipino Bamboo Dance Academy where people participated in an extensive dance workshop once a week for three months.

With February 2018 marking the ten-year anniversary of Tekniqlingz and the beginning of its official workshops, the organization plans to host a gala at the FilCom Center. “Tekniqlingz 10th Anniversary Cultural Filipino Night Gala” will be on Saturday, February 10.

The event is a dinner with a silent auction as well as traditional Filipino folk dancing and performances by Tekniqlingz. Individual seating is at $75; group rate of $600 for a table of ten.

“It’s all about celebrating just a lot of what we did,” Torno said. “Starting from a dance group to doing a lot for the community such as outreach and teaching people about Filipino dance and educating about Filipino culture.”

“Our tagline is to educate, empower, and entertain. When we perform, we educate first before every performance about what the dance is about, whether it is traditional dance or modern dance. We always do an audience participation and teach them on the spot. We empower them by allowing the audience to partake in the performance. Entertaining is all about making it fun and connect the pieces together in regards to what we are about. It gives people a good positive feeling at the end of our performance.”