(8th in a series of profiles of Martial Law Babies as we prepare to mark the 50th anniversary of the martial law declaration in September. Ferdinand Marcos tried and failed to mold this generation into his version of the Hitler Youth. They fought his dictatorship instead.)

Raffy Aquino’s most vivid memory of the day Ferdinand Marcos declared martial law in September 1972 was of his lola standing at their front door waiting for him when he came home. 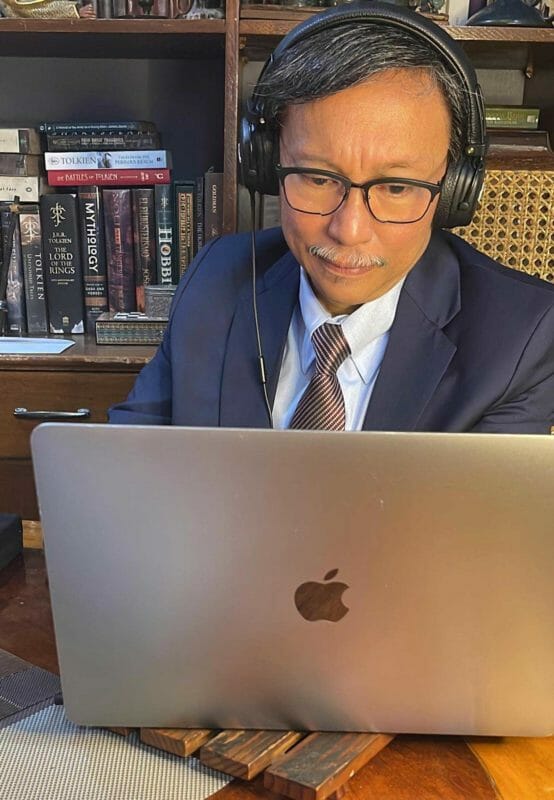 In Ilocano, she told him to come inside — and be quiet. “Somber yung mood. The mood was somber.”

For those of us who were children when martial law was declared what happened to TV broadcasts was one most of us remember clearly. For suddenly, there was nothing on TV. We have different ways of remembering what we saw. Kiko Pangilinan described the static as ants. Raffy compared it to snow,

Another memory stands out for most of us: the silence and the fear.

Raffy’s father had been a staunch critic of Marcos whom he considered a fraud for claiming to be a World War II hero. “My father never bought into that.” His father also was confident that Marcos would never dare declare martial law.

When that did happen, “biglang tumahimik sa dinner table. It was suddenly quiet at the dinner table,” Raffy recalled. “Let’s feel our way through this,” his father said.

His father would regain his bearings eventually and resume his critical attitude toward what is now a dictatorship “although in softer tones.”

In a way, Raffy was lucky compared with most of us Martial Law Babies.  Yes, the songs praising his vision of a New Society he found moving and “catchy.” But influenced by a father who saw through the lies of the regime, he knew that he and most of us were being fed lies — Marcos propaganda.

And as a young man, he would join the fight against the lies — and the silence.

Like other Martial Law Babies, he saw how Filipinos fought back — with noise. The April 1978 noise barrage is still remembered as a triumphant act of defiance that showed most of us that the dictatorship was not invincible.

“It was deafening and inspiring at the same time,” he said. “Truly, it was a crack in the wall of silence.”

He would become even more deeply involved in the fight to break that wall of silence and fear as a student at UP Diliman.

And there was one time when creating noise and speaking out got him in trouble. Raffy was at the big 1982 student demonstration at Liwasang Bonifacio, which was violently dispersed.

“We hid under the steps of the post office and we saw the aftermath of the dispersal. Maraming nasaktan. Many were hurt.”

He decided to leave his hiding place to confront the police general about the need to help the students who were hurt. Raffy was arrested and spent a few days in jail at the Manila Western Police District headquarters

By then, he had heard and was impressed by the work of human rights lawyers who were playing an increasingly important role in defending those who were fighting the dictatorship. Many of them belonged to the Free Legal Assistance Group led by revered opposition leader Pepe Diokno, who immediately sent FLAG lawyers to help out Raffy and other arrested students.

Eventually, FLAG and human rights law would become part of Raffy’s life, as a student and later as a lawyer. He went on to become one of the leaders of the UP Student Law Government. He spearheaded what is still remembered as the elected body’s most memorable role in the final confrontation with the Marcos dictatorship.

When the February 1986 uprising began, the UP Law Student Group proclaimed itself as the UP Law Liberation Forces and headed straight to where the action was on EDSA right outside at Camp Crame.

“We arrived before the multitude and were able to position ourselves right in front of the Camp Crame gate,” he recalled in a Facebook post in 2016. They paid two cigarette vendors to climb the camp gate and hang the “U.P. College of Law” banner.

Raffy spent years looking for “photographic evidence” of the act of rebellion. “Finally, today, thirty years later, I found it! UP LAW!!!” he said in 2016.

The 1986 uprising was a defining moment for our generation. There were many of us who hoped Cory Aquino would usher in a new era in our history focused on strong democratic governance and human rights.

That didn’t happen. And that failure led to the rise of a Duterte and to the possible return of another Marcos. There were many squandered opportunities to expand and strengthen democratic institutions.

At UP in the 1980s, we had hoped that the progressive movement would build on the political culture that inspired generations of activists to join the fight against dictatorship. It was a culture rooted in the belief that politically organized and engaged communities that historically have been shut out of the political system  — workers, farmers, students, fisherfolk — can ensure a dynamic democracy not dominated and distorted by elite politics.

That’s now how things turned out.

One of the most stunning developments in recent years is how major left organizations actually embraced Duterte when he ran for president and even after he took power — even when his government began its murderous campaign.

It is puzzling and disappointing, he said, that the left “had to go to bed with Duterte.” And so is the possibility of a Marcos comeback.

“Nakakalungkot isipin na yong efforts mo belonging to that generation has all been for naught.  It’s sad to think that all your efforts have been all for naught.” His biggest fear is “that we degenerate into a failed state under Marcos (Jr.) that will totally negate the movement toward modernization and stronger institutions.” There is also a more personal fear, “that our daughter would no longer find any compelling reason to stay in the country. Nalulungkot ako doon sa totoo lang. I am truly saddened by that.”

“Fighting for the future with some very nice people by your side. Does not get any better than this,” he posted on Facebook.

Earlier, he said, “We welcome miracles, and celebrate them. The point, however, is not to rely on them. Paghusayin ang hanay.”

The statement underlined the kind of politics we understood to be the key to a really strong democratic society:  organized, empowered communities who define their own futures aided by leaders who rise and move forward with them.

“Patuloy pa rin ako. I push on,” he said, as he recalled the quote from the Italian revolutionary Antonio Gramsci, whom many of us admired. “Pessimism of the intellect, optimism of will.”

“My mind is pessimistic, but my will is optimistic,” Gramsci said. “Whatever the situation, I imagine the worst that could happen in order to summon up all my reserves and will power to overcome every obstacle.”

That reminded me of another leader, the Czech dissident, writer and statesman Vaclav Havel, who led the resistance to Soviet repression and spent years in prison before spearheading the Velvet Revolution in Czechoslovakia in 1989.

“Hope is not the conviction that something will turn out well,” he said, “but the certainty that something is worth doing no matter how it turns out.”

It is a time to be thinking and talking about hope.