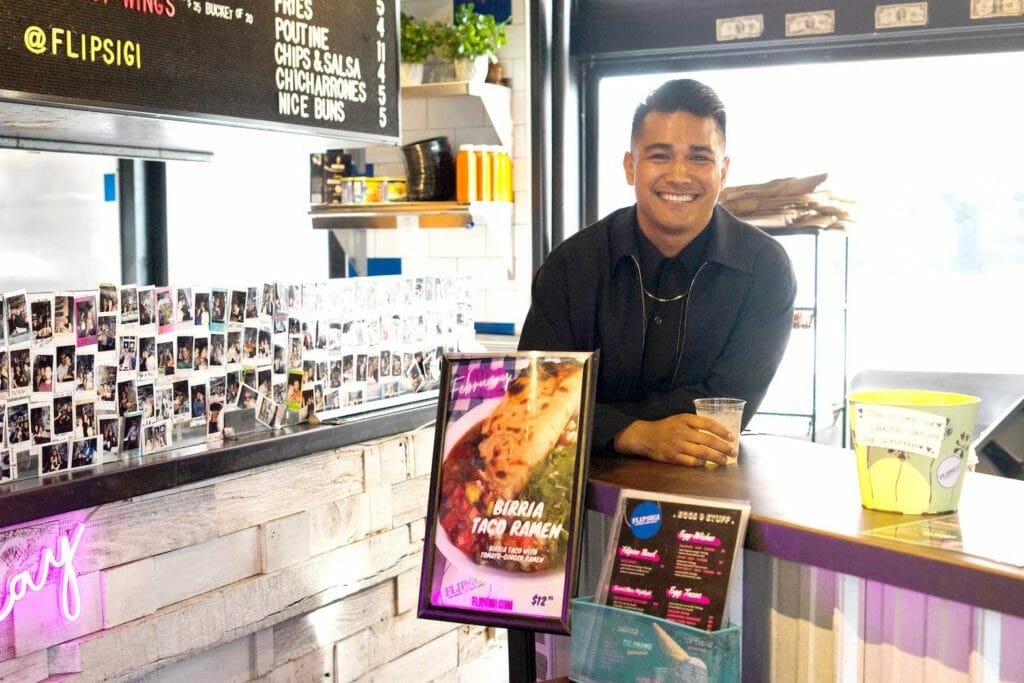 Although the first two weeks of the pandemic made him anxious about keeping the restaurant afloat, he and his business partners kept it open, even operating at a loss, convinced that it was a better strategy than closing and reopening it.

So, at the onset of Covid, Flip Sigi opened its doors to front-line workers with the philanthropic program “Feed Our Warriors” and donated over 3,000 meals from March 2020 until a year ago when donations stopped coming. It paid its employees, maintained the restaurant and sustained its momentum. It’s been busier now compared with the past six years, and this seems to be just the beginning of bigger things for Andino’s Flip Sigi, which he and his partners conceived and built from scratch in 2015.

Chef Andino comes from a family with a longstanding culinary tradition. He was born and raised in Toronto, Canada. His parents met for the first time in Canada although both sides of his family moved there in the late 1970s. Andino’s mom is from Cebu and his dad is from Nasugbu, Batangas.

At age nine, Andino already started showing interest in cooking. He got his affinity for the kitchen from his dad, a chef who owned restaurants in Canada.

“A lot of the foundation of cooking came from him. My dad had an upscale Canadian restaurant. He also did some European cuisine and a restaurant that had a focus on Southeast Asian food with emphasis on Filipino.”

Even though his dad has had a big role in his culinary journey, the flavors and recipes that Flip Sigi showcases came from his lola, his dad’s mom. “The nostalgia and flavor that I grew up eating is what drove the concept and the flavor that you find here.”

Flip Sigi as a concept

After working with his current business partners for two years, they asked him what he wanted to do; they suggested opening a taqueria. This happened when they were in the Hamptons in 2015. Andino initially hesitated with the original pan because taquerias are dime and dozen everywhere. He wanted a concept that would set them apart.

So, he suggested a Filipino-style taqueria. He thought the Spanish and Asian combination made more sense. He googled “Filipino Taqueria” and it yielded “no results found.” Andino wanted to leave a legacy with this “flip” in flavors. He made a familiar taco with a Pinoy twist his brainchild. Food, interior design and music were all in Andino’s concepts. His two business partners oversaw the expansion.

Andino did not want a traditional Filipino dining concept right off the bat because in 2015, if it was not Vietnamese, Korean, Chinese, Thai or Japanese, anything else was difficult to mainstream.

Flip Sigi started as “2nd City,” referring to Cebu, the second largest city in the Philippines after Manila. For a year, they used this name but had a problem with branding and marketing as “second city” could also be associated with Chicago. Flip Sigi came from “Flip” a shortened yet controversial term for Filipinos and “Sigi” is from the word “sige,” which means go. The team moved forward with the name Flip Sigi which translates to “Go, Filipino,” and never looked back.

Flip Sigi gets its start

Andino attributes Flip Sigi’s success to luck brought by the advent of influencers in the age of social media. The restaurant officially opened in its original location in New York’s West Village on May 5, 2016 just as food influencers were taking off on Instagram. The attention from influencers led to bigger things.

Flip Sigi gained more interest from local media not just for its food, but also for Andino’s charm and good looks. He is the face and voice of the business. In 2018, was among the top 10 of People Magazine’s Sexiest Chef Alive. 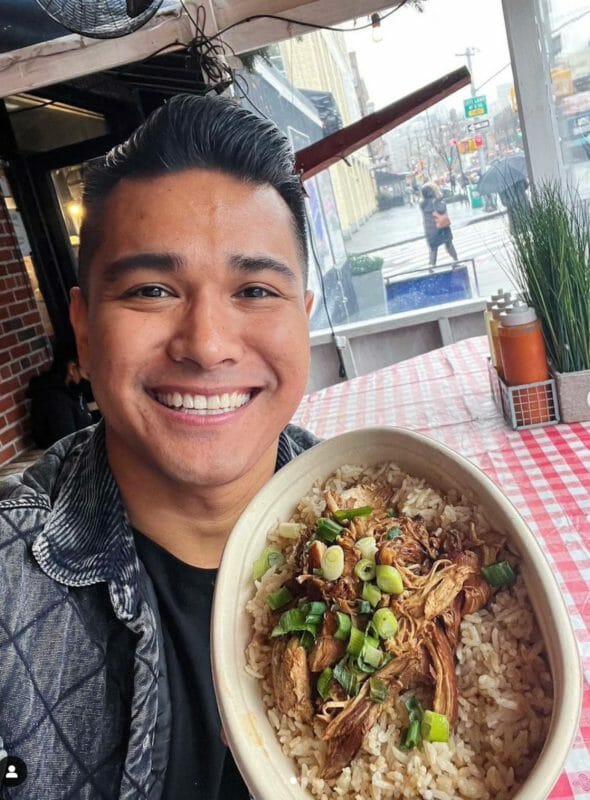 But Andino admits he prefers to work in the kitchen and behind the scenes. “It has not been easy juggling different roles, but I have to deal with every opportunity that comes along,” he said of being the face and the driving force of Flip Sigi.

It wasn’t easy starting from scratch, “but my business partners had contacts that believed in them.” In 2015, his partners set up a 16-person dinner; 12 out of those invited were potential investors. Andino produced a Michelin star-like Flip Sigi menu and gave them a nine-course dinner. Once they tasted it, he was asked if he could turn those flavors into a fast casual dining concept. In six years, and despite the setback caused by the pandemic, Flip Sigi has grown. It now has locations in West Village in New York, Jersey City and Chicago. It’s also adding a second New York location in Manhattan’s Chelsea neighborhood.

Andino stresses that their longevity came from the spiel they told everyone from the beginning —  Flip Sigi is not Filipino food.

Andino is proud of his identity as a chef born in Canada tracing his Filipino roots to understand where he came from and putting his own spin on Filipino cooking and ingredients. Flip Sigi’s most used Filipino ingredients are calamansi, Filipino vinegar and dark soy sauce.

Andino believes Flip Sigi’s success is the result of diligence and being surrounded with people he trusts and share his vision He also didn’t let the pandemic beat him down, making a conscious decision to forgo sleep in the next five years to maximize work efficiency.

When indoor dining was not allowed in New York, 100% of Flip Sigi’s business was carry-out and orders from food delivery apps. “Luckily rent was abated for eighteen months. My business partners are the reason for still having Flip Sigiuntil today.”

A big turning point was when they included breakfast in their menu. Flip Sigi is now serving pandesal sandwiches with longganisa egg and cheese, spam egg and cheese, and pork belly with egg and cheese, served with either banana ketchup and suka. They also recently added taco with a quarter of sinigang hash brown for breakfast.

Andino believes that giving back to the community had a positive ripple effect. Their goodwill during the pandemic through the “Feed our Warriors” support for front-line workers put them on the map.

Despite the hype that Filipino food has received in recent years, it hasn’t really taken off in the mainstream, and a lot of Filipino restaurants have shut down. Andino attributes this to the dining public’s continuing unfamiliarity with Filipino cuisine. has not reached its peak yet because of unfamiliarity.

“As much PR as we get as a culture and as a cuisine, it is not enough, and we have to keep going. If you google young Filipino chefs, there’s not as many of us. To break into the top five of Asian cuisines in North America, we have to work harder as a community, work smarter and we need more people to help share the spotlight.

Andino thinks that “assimilation” is one of the most disruptive and poisonous words in the English dictionary. “It is a way of saying don’t be who you are and be like us, and unfortunately because of the racism that my parents experienced, we have been trained as Filipinos to assimilate.

“The concepts of ‘attention,’ ‘bravado’ and ‘confidence’ are not taught in our culture as much as they should be. Once we start believing in ourselves a little bit more, then we are more adept to handle a spotlight that eventually we should want and should have.”

LATEST
How Americans are boycotting companies now
US companies to face legal clashes covering workers’ abortion costs
Canada to let foreign students stay and work to fill labor shortage
Ethereum holds its breath for the mean and lean ‘merge’
Buckle Up: How investors can keep up with crypto turbulence
Digital World board receives subpoena over Trump’s social media deal