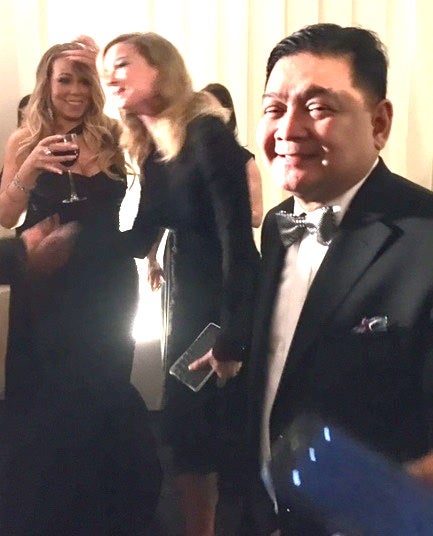 The author ‘eavesdropping’ on Mariah Carey and Allison Janney. THE FILAM

NEW YORK — I had to pinch myself; it was for real!

I ran into Tom Hanks at the men’s room. I was shoulder to shoulder with Susan Sarandon and Mariah Carey at the after-party. I had a selfie with Neil Patrick Harris. I was a few feet away from Oprah Winfrey. We were among cinema celebrities, me and my partner Jerry Sibal, when we attended the recent 75th Golden Globe Awards in L.A.

The moment Hollywood Foreign Press Association (HFPA) ex-Chair and now board member Ruben Nepales and Executive Secretary Janet Susan Rodriguez Nepales texted us about our availability to attend the Golden Globes, we readily said yes! The only caveat: Keep it confidential and no Facebook posting.

While the anticipation was pure excitement, getting there was nerve-wracking! 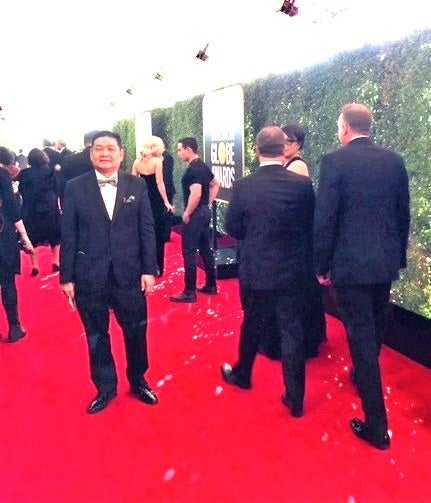 The red-carpet walk. THE FILAM

NYC experienced the bomb cyclone, and the snow canceled all flights. Frustrated, we were on the phone and Internet trying to rebook. The flight we got had a layover of six hours in Austin, Texas; we got it. As luck would have it, our good friends Rina Saporsantos-Dia and Benjie Dia, who are from there, fetched us at the airport. In the wee hours of the morning, the four of us did some serious catching up in a 24-hour diner.

We arrived in L.A. and began to read the rules in the three-tiered big envelope invitation.

We got on a Lyft and drove to where the action was. We saw single line cars and strict security a few miles long: Inspection points with metal detectors and dogs. We presented our invitation and put the permit card on the dashboard.

The minute we stepped into the red carpet…ah, what a feeling! A feeling of being famous and fabulous. The Beverly Hills Hilton Hotel was crawling with celebrities in black gowns and suits, the women in black making a bold statement against sexual misconduct.

On both sides of the red-carpet walk were big studio tents, with foreign and American press lined up to interview the stars. At the end of the line, we were served with Moët and Chandon champagne. From the bar we eyed the unfolding scene, we watched recognizable faces pass us. Jerry and I could not contain our excitement. Sigh, no cameras or selfie shots allowed in the center of the ballroom. 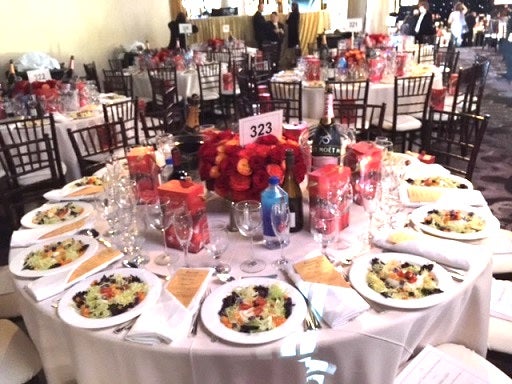 Our table was bedecked with a full bloom of orange and red colored roses on a big round vase with diamonds underneath it. Each table held two big 2006 Moët Chandon bottles and giveaway boxes of Lindt chocolates. We were seated not far from the stage, sharing a table with Neil Patrick Harris and Kate Hudson. We had a panoramic view of every Hollywood A-lister in the center of the room and most of the nominees. We had our dinner of greens with mozzarella, sea bass and finally a chocolate dessert with inscription 75th Year. Couldn’t help it, I had to take a couple of clandestine memory shots. 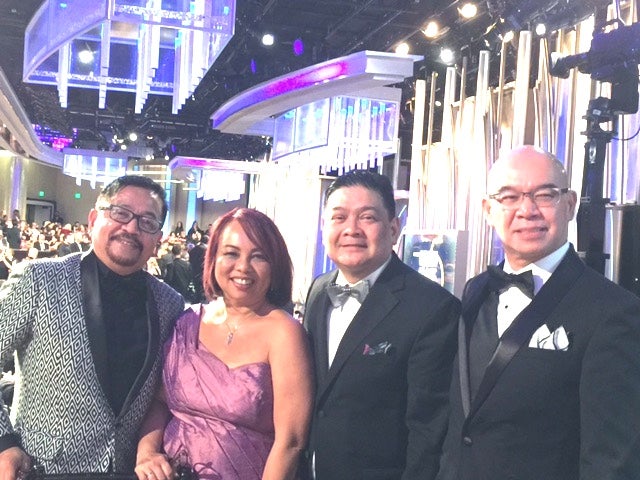 We were a table away from Margaret Gardiner, a former Miss Universe from South Africa, who is now an entertainment journalist at HFPA. We met her in NYC and became fast friends. She introduced us to the current Miss Universe from her country, Demi-Leigh Nel-Peters.

The highlights of the night are all etched in memory:

Kirk Douglas, all of 101 years, appearing on a wheelchair commanding the silence of the ballroom as he spoke. Oprah Winfrey’s electrifying speech accepting her Cecil B. De Mille Award. The speech merited three standing ovations! The surprise appearance of the stunning Barbra Streisand who was not mentioned in the program. 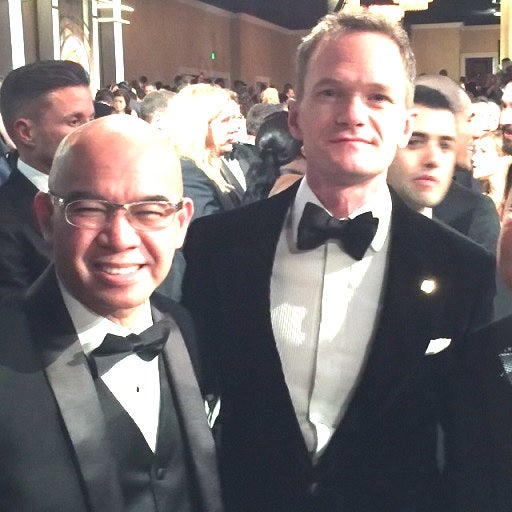 After the show, Ruben and Janet led us to get our gift bags. The men got a traveling rolling bag with charger loaded with men’s accoutrement and a 75th Year memory book. A Kate Spade tote bag with more gifts were given to the women. The next stop was the after-party where food stations and a larger-than-life dance floor awaited.

From red carpet to ballroom to after-party, we ran into Fil-Ams — some we know, others we got to meet that night: Award-winning songwriter Robert Lopez, actor Vinny Rodriguez, Dr. Tess Mauricio, who is a Golden Globe regular, fashion designers Puey Quinones and Oliver Tolentino, photographer Filbert Kung, Narciso Chan who is the president of Curve Entertainment Philippines, Flora Ramos, who is the former managing director of Dyna-EMI Music; her husband, Marlo Ramos, who is a retired manufacturing safety and environmental manager; and publicist Rene Durian. 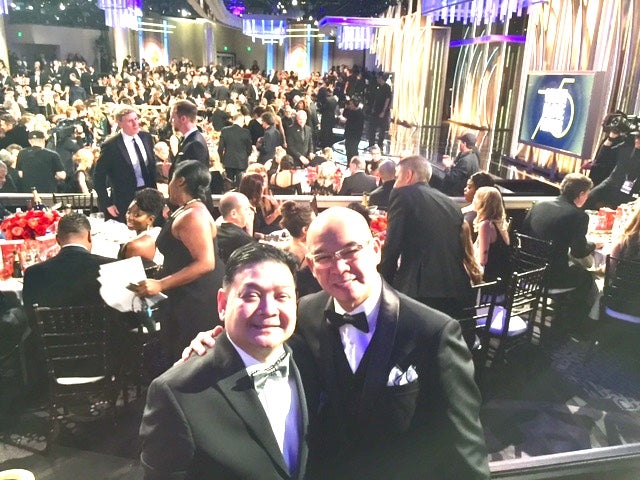 The guests came in black. THE FILAM

It’s been three weeks since, and we’re still talking about our experience. We cannot thank enough our good friends Ruben and Janet for this beautiful gift of friendship. In the wink of an eye everything is but a memory we will always treasure.

A New York resident for 31 years, Edwin Josue has a successful career in real estate, specializing in high-end properties. He was the first Filipino to work as an Associate Broker and trusted to manage several landmark buildings across NYC. He is currently a licensed property agent at Halstead Properties. He was actively involved in the 2015 Philippine Gold Exhibit held at the Asia Society. He and partner Jerry Sibal joined the Noli Me Tangere the Opera staged in NYC. A TOFA (The Outstanding Filipino Americans) awardee, Edwin is a magna cum laude Economics graduate from San Beda College and earned an MBA from De La Salle University.