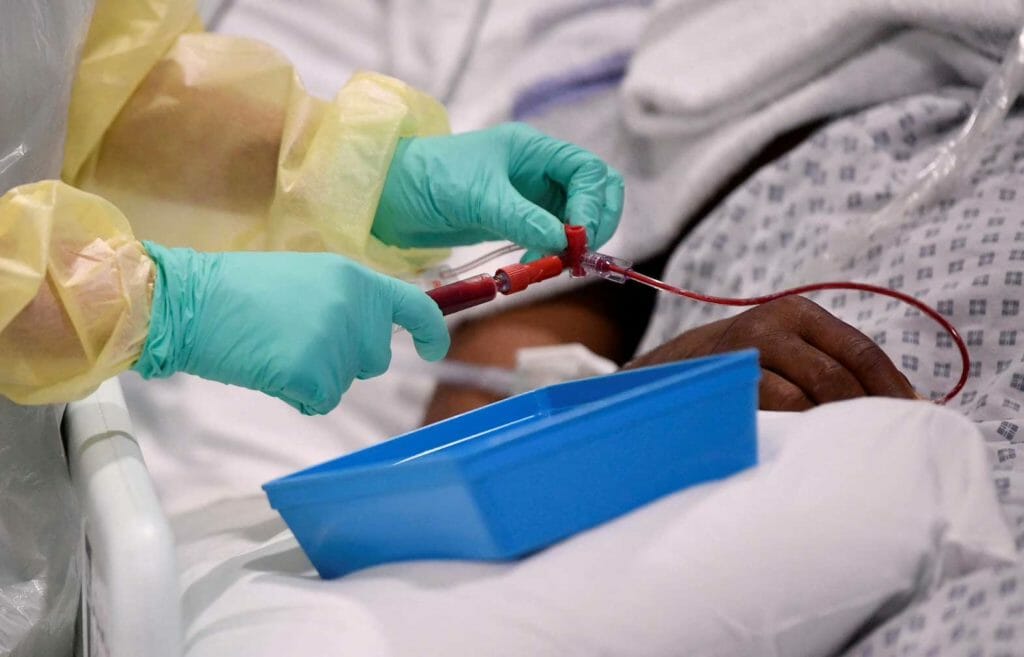 A nurse helps with treatment of a Covid-19 patient in the ICU (Intensive Care Unit) at Milton Keynes University Hospital, amid the spread of the coronavirus disease (COVID-19) pandemic, Milton Keynes, Britain, January 20, 2021. REUTERS/Toby Melville/File Photo

Scientists have pinpointed 16 new genetic variants in people who developed severe COVID-19 in a large study published on Monday that could help researchers develop treatments for very sick patients.

The results suggest that people with severe Covid have genes that predispose them to one of two problems: failure to limit the ability of the virus to make copies of itself, or excessive inflammation and blood clotting.

The scientists said their discoveries, published in the journal Nature, could help prioritize the likely treatments that could work against the disease.

Eventually, the information could even help predict which patients were likely to become severely ill.

“It is potentially possible in future that we will be able to make predictions about patients based on their genome at the point of presenting (for) critical care,” said Kenneth Baillie, consultant in critical care medicine at the University of Edinburgh and one of the study authors, told reporters.

The genetic analysis of nearly 56,000 samples from people in Britain showed differences in 23 genes in COVID-19 patients who became critically ill, when compared with the DNA of other groups included in the study, including 16 differences that had not been previously identified.

The new findings could help guide scientists in their search for existing drugs that might be useful for treating COVID-19.

For example, the researchers found changes in key genes that regulate the level of factor VIII, a protein involved in forming blood clots.

“Blood clotting is one of the main reasons why patients with COVID develop a shortage of oxygen. So that’s potentially targetable to prevent those clots from forming,” Baillie said.

But “we can’t know if these medicines will work until we try them in people”.

One of the previously discovered genes, TYK2, is targeted by Eli Lilly’s arthritis drug baricitinib, now being studied as a treatment for COVID-19.

The drug was shown last week to cut the risk of death and hospitalisation in COVID-19 patients by 13% in a trial.