Martial Law Babies: Ted Te, the fight of a lifetime

Martial Law Babies: Ted Te, the fight of a lifetime 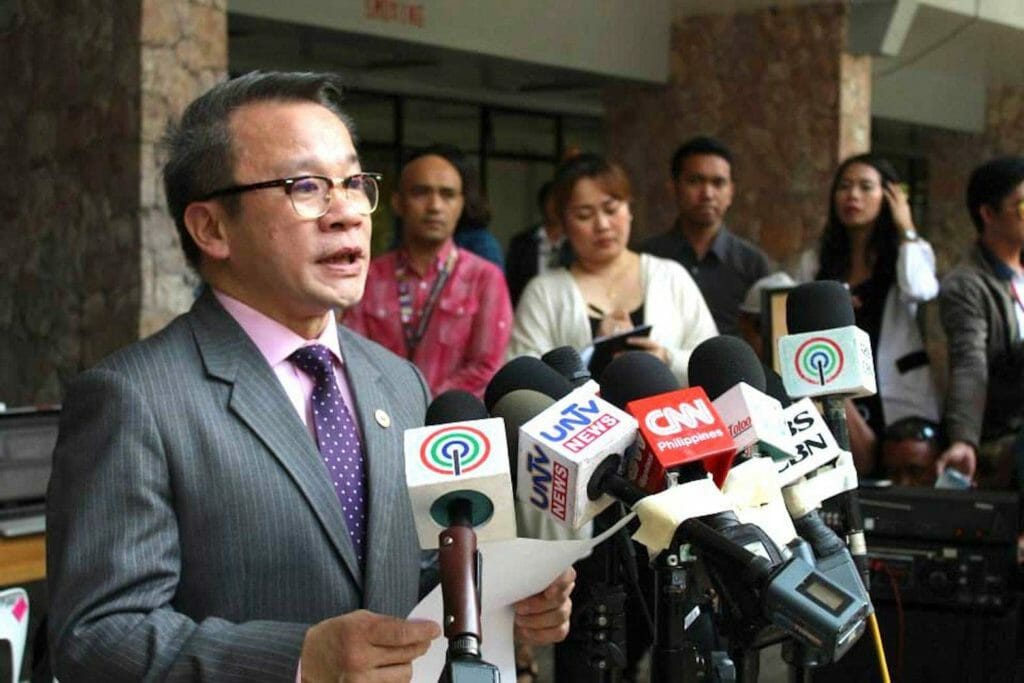 Ted Te also served as public information officer of the Supreme Court under Chief Justice Meilou Sereno before she was ousted as the Duterte campaign against critics of his regime got underway. (Tarra Quismundo)

(6th in a series of profiles of Martial Law Babies as we prepare to mark the 50th anniversary of the martial law declaration in September. Ferdinand Marcos tried and failed to mold this generation into his version of the Hitler Youth. They fought his dictatorship instead.)

Like most of us who were children when martial law was declared, Ted Te didn’t really understand what it was all about. We didn’t even know how to spell it — Marshallo? Mar Shalo?

Ted, who was six years old living with his Chinese Filipino family in Davao, actually thought it was the name of a person. Could it be some  disgraced  relative (Marcia Lo?) that his family suddenly began discussing in whispered conversations?

“Everybody was quiet. Talagang takot na takot. They were so afraid,” Ted told me. “Everybody was saying martial law, martial law. In my crazy six-year-old mind, I was thinking, ‘Kamag-anak ba iyan? Is that a relative?”

Eventually, it became clear that there was nothing to worry about. For a middle class family like Ted’s, life went on — so long as they kept quiet and simply accepted the new order.  Life even seemed great under martial law. That’s what the controlled media said.

Ted remembered the pro-Marcos songs, and watched him and Imelda on TV. “Very optimistic ang pasok. It all seemed optimistic. Everything was good. I didn’t see the other narrative about what was happening outside.”

That changed when he went to high school in Cagayan De Oro. By then, that part of the country had emerged as a bastion of the opposition to dictatorship, led by figures like Nene Pimentel and Bono Adaza.

That’s when his political awakening began, Ted said. For a paper in one of his classes, he opted to write about hamletting, one of the cruel, inhumane tactics the Marcos military used to keep people under control by essentially turning their community into one big prison.

His teacher asked why he chose that topic. Why not? “It was new and I thought it was relevant,” he said.

His politicization became even deeper after he entered UP in 1982. By then, Diliman was a center of activism against the dictatorship.

It was in the final months of the regime that Ted made a critical decision: he was going to law school. He made the choice with some reluctance. Why study law in a system where Marcos had all the power? “Para saan ang mga batas? What are the laws for?” he asked. “I really hated it at the time.”

But then the Marcos dictatorship was overthrown in the 1986 EDSA People Power uprising. The constitution he used for one-man rule was revoked. Suddenly, it was actually an exciting time to be a law student and an aspiring lawyer.

Ted found himself part of the class that entered  UP Law “without a constitution.” “I remember my law professor Perfecto Ferdnandez saying, ‘We don’t have a constitution and this is a constitutional law class. What are we going to study?’”

He said they ended up studying the 1935 and 1973 Constitutions, before delving into the newly-adopted 1987 Constitution, created by a commission that included people who were part of the fight against the dictatorship and who understood the importance of protecting the civil and human rights of all Filipinos, including Sister Christine Tan, activist filmmaker Lino Brocka, student leader Chito Gascon, activist academic Ed Garcia.

It was “not a perfect document,” Ted said. But it was definitely “one of the better ones in terms of human rights and social justice.”

He became part of efforts to explain the new Constitution to ordinary Filipinos, including farmers, workers and the urban poor.

One point was important to stress, he said. “Ito ang mga karapatan ninyo. Ito ay nasa Saligang Batas. Pero hindi kailangang ibigay sa inyo ang mga ito ng gobyerno. Maaari ninyo angkinin ang mga ito dahil kayo ay tao.  These are your rights. These are in the Constitution. But you shouldn’t need to ask the government to give you these rights. These are your rights because you are human beings.”

Like many of us Martial Law Babies, Ted admired the revered human rights fighter Pepe Diokno, who offered a view of the legal profession that resonated with him. Ka Pepe stressed that “you could use law to change it, but you have to study it well. You have to become an expert in the law to change the law. And by changing the law, you can change whatever’s going on.”

Ted taught law at UP while remaining active in the Free Legal Assistance Group, the renowned human rights organization launched by Pepe Diokno. He also served as public information officer of the Supreme Court under Chief Justice Meilou Sereno before she was ousted as the Duterte campaign against critics of his regime got underway.

By then, the human rights situation in the country had become grim once again under a president who, in many ways, was worse — more brazenly crude in his abuse of power — than the dictator we ousted more than three decades ago.

Duterte’s campaign against illegal drugs led to mass killings that have wreaked havoc in many parts of the country, particularly working class and urban poor communities. He has shamelessly gone after any who criticized his regime.

What has happened in the last six years offers an important lesson about human rights and the need to defend them.

“It’s something we don’t realize we value until we lose it or we almost lose it,” he said. “During Marcos’ time, everyone was talking about human rights because we knew we didn’t have it, and that Marcos was curtailing it, and wrote a Constitution that would allow him to do that.”

For a few years after the dictatorship was ousted, there was a sense of triumph and celebration. Human rights had been restored. And the country, it seemed then, would never let the dark days of the Marcos years return, when people were brutalized, when torture and murder were rampant. This was underscored by the creation of the Commission on Human Rights, a constitutional body founded by Pepe Diokno and had been led by the late Chito Gascon.

What has happened under Duterte, Ted said, shows “that you can lose it by not asserting it, by not defending it.”

We now also face the possibility of another Marcos taking power.

“It’s really a nightmare,” Ted said. “I’m sure many of us from our generation would really not want to consider it — but we have to consider that possibility.”

“So iyong pagmumulat, kailgangan uli yon. Kailangan uli umpisahan. The raising of awareness will be needed again. We need to do that again.”

It won’t be easy. Just like during the years shortly after the rise of the Marcos dictatorship, those opposed to the regime had to contend with fear and silence.

“Parang shock and awe. It’s like shock and awe. The people were so shocked that this could happen, that someone would even be so brazen to do this, nadesensitize din sila. They’ve become desensitized.”

“Mas mahirap ngayon kasi may mga tao who started to say, ‘Sige, tatahimik na lang ako, kasi mahirap o delikado o antayin ko na lang na mawala na ito. Mahirap ibangon iyon. It’s hard when people have started to say, ‘I should just stay silent because this is a tough and dangerous situation or I should wait for this storm to pass. It’s hard to go against that. ”

But if the Marcoses, the forces that looted and abused the country, make a comeback, what needs to be done is clear, Ted said. “The work continues,” he said. “The work must continue.”

In the same way, the forces that seized power half a century ago were never completely defeated.

It’s hard to look back, we agreed. I asked how it feels, that we were children when Marcos began to destroy the country by imposing martial law and setting up a brutal dictatorship — an event that we eventually understood led to a reign of terror and greed — and here we are now aging Filipinos in our 50s and 60s facing the grim possibility of a Marcos restoration.

Ted shook his head before responding. “It’s like a lifetime talaga,” he said. “In a sense, buong buhay na nating ginagawa ito. We have to keep fighting for this for the rest of our lives.”

MOST READ
usa Ye admits he “sees good things about Hitler.”
usa Quebec coroners refuse to reopen case of Filipina, 86, found dead on hospital floor
usa 10 Signs Your Partner Is Emotionally Unavailable
usa Tenuto 2: The Only Male Vibrator Designed For Him With Her In Mind
usa Why Am I So Emotional? 10 Reasons Why and How to Handle It
usa Kanye West reveals he caught Chris Paul with Kim Kardashian
usa No Contact Rule: The Best Way to Get Over Your Ex
DID YOU KNOW?
25 Best Deals for the Holidays - Gift Guide 2022
Best Crystals for Protection Against Negative Energy
25 Best Holiday Deals: Top Brands to Shop This Holiday Season
Best Barbie Dollhouses 2022
Best Anime Mouse Pad 2022
5 Ways to Hack the Holidays with the Best Cash Back App
4 of the Best Holiday Gifts for Coffee Lovers