The unique Filipino brand of faith

The unique Filipino brand of faith 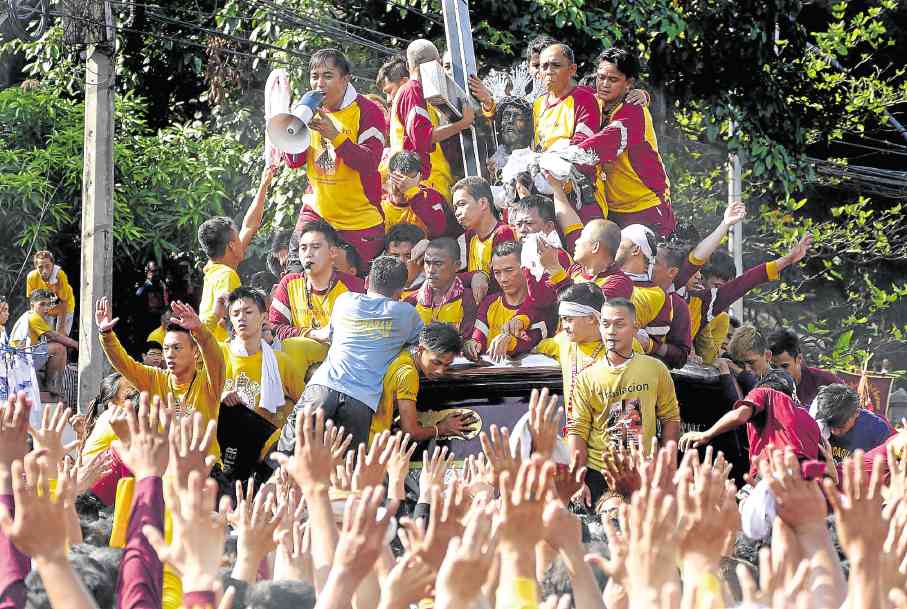 The Traslacion in Manila. INQUIRER FILE

That humongous display of Filipino faith, the 20 to 24-hour procession every January 9, is without doubt one of the world’s biggest religious events. Yow’zah!

Definitely, the grand TRASLACION is an annual spectacle, now being replicated in several provinces (Cagayan de Oro, Bohol, Davao, Bicol, Ilocos Norte and Zamboanga). With millions of devotees participating, counting those who visit Quiapo Church and those who do “pahalik” at the Grandstand the long night before, at least one tenth of the entire Philippine population is in Manila for this annual event; that is, 1 in 10 Filipinos.

WHY? “The Black Nazarene elicits the most passionate devotion because while His image bears suffering, it is not passive. While He bears the cross, He exudes strength.” Such was Senator Kiko Pangilinan’s crisp thought (PDI, January 9, 2018) regarding this particular Filipino devotion. I should say this devotion is unique in every sense.

First and foremost, the devotion to the Black Nazarene is a Filipino way of the Imitation of Christ. The Traslacion is doing again the Calvary experience, performing again the painful suffering that our dear Lord endured like walking barefoot, carrying the cross along dusty roads, under the heat of the sun, with the noisy crowd, etcetera.

Catholicism everywhere is manifested in two styles of religious practice: the official and the popular. The official Catholic religiosity is mainly the liturgical celebration of the Paschal Mystery (Life, Death, and Resurrection) of Jesus during Advent, Christmas Season, ordinary time, Lenten and Easter Season.

It’s a joyful celebration of the liturgical life of the Church, the Seven Sacraments and Sacramentals (the Rosary, the Angelus, the Stations of the Cross, the veneration of relics and other devotions).

Some popular devotions are not official. The devotions in honor of Mary in Garabandal (Spain), Medjugorje (former Yugoslavia), and Lipa (Philippines) are not yet official.

Popular religiosity, on the other hand, comes from the active reception, participation, or appropriation of Catholic Faith by the People of God according to their culture and tradition. Popular religiosity does not replace the liturgical life of the Church.

The tremendous devotion to the Black Nazarene is both an official and a popular religious practice.

It is official because the uniquely Filipino devotion was canonically recognized by two popes, one was Innocent X, who in 1650 approved the veneration of the image as a sacramental and authorized the establishment of the Confradia de Jesus Nazareno (see J. Gordon Melton, Religious Celebrations: An Encyclopedia of Holidays, Festivals, Solemn Observances, and Spiritual Commemorations. ABC-CLIO, 2011, pp. 118–119).

The other pope was Pius VII, who granted in the 19th century plenary indulgence “to those who pray to it in a pious way” (see Francisco S. Gianan, The Black Nazarene: His Devotees. 1979).

The test of faith and patience

Andas or the splendid carroza, where the image is securely placed, is pulled by two 50-meter-long ropes and is paraded along the crowded streets of Manila. Stronger devotees, men and women, young and old, from all walks of life trudge barefoot and join the 20 to 24-hour procession under the scourging heat of the sun or heavy rains. The weaker devotees line along the road as they watch and wave their towels or cloths, shouting the name of the Senor Nazareno.

Days prior to the Traslacion, there are other acts of devotion. Pahalik means the kissing of the statue of the Nazarene, paglalakad ng paluhod or the approach from the front door to the altar of the church on knees, pabihis or the ceremonial changing of garments of the Nazarene, and during the actual procession the pagpasan or the carrying of the Andas on shoulders or the rope attached to it, and pagpapahid or touching the statue with cloths.

How amazing to watch devotees patiently wait for seven hours without complaints.

Worship or adoration and thanksgiving during the Holy Mass at Grandstand, Luneta, this year attended by the new Papal Nuncio to the Philippines, petition or supplication and contrition for sins (essential elements of a complete prayer) are accomplished on several degrees, multiplied by millions. What spiritual force!

Many come to tell Jesus both their dreams and problems. But to give back to God the immense blessings they have received is what matters most.

When elsewhere in the four corners of the globe religious practices are abandoned and we see empty pews and altars in huge cathedrals and churches, the minor basilica dedicated to the Black Nazarene (Quiapo) is exploding with warm bodies and flooded with high spirits.

The whole House of God is alive with hourly celebration of the Holy Sacrifice of the Mass. And most remarkably, there are long queues for confessions, wherein more sins are washed away by the Precious Blood of the Savior, and more priests make themselves available.

Luis Antonio Cardinal Tagle, D.D., Archbishop of Manila, has expressed hope that the millions of devotees will nurture a deeper relationship with Jesus Christ (PDI, January 9, 2018).

PDI columnist Randy David writes: “Our faith, being naive, is immune to disappointment. It may be shallow, but it is firm, and is ever hopeful. That is why our churches are never empty. Rather than cause resentment and despair, every misfortune is read as a summons to stronger faith. Nothing fazes us—not calamities, not foreign cultures, not poverty, not even death… We bounce back all the time.”

Sociologists call it collective energy. For me, it’s spiritual wealth that accompanies this devotion, uniquely Filipino in style.

Jose Mario Bautista Maximiano is a Catholic writer, educator, management consultant and motivational speaker. He is author of Pope Francis, the Catholic Bishop, and the Priest (Cardinal Sin Catholic Book Awardee for 2015). His latest oeuvre is entitled The Church Can Handle the Truth (2017)