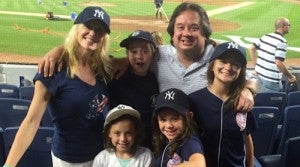 NEW YORK CITY — Few Filipino Americans know the name George T. Conway III. The husband of Kellyanne Conway, senior adviser to President-elect Donald Trump, he has never been active in the Filipino American community and it was only recently that his Filipino heritage had even been made public.

So when it was reported last week that Conway is on the shortlist of nominees for U.S. solicitor general, Filipino Americans greeted the news with a mix of surprise and skepticism.

“I didn’t realize that he is Filipino American,” said Rudy Asercion, chairman of the National Organization of Filipino-American Republicans and an elected member of the San Francisco Republican Party Central Committee. “My wife says that his mother is Filipino, but we are still not sure about that.”

Yet, as a devoted Republican, Asercion was brimming with pride at the news.

“This is very telling that a Filipino should be raised up [under a Republican administration],” he said. Whenever the nation’s leader is a Democrat, he added, “it doesn’t do anything” for the community.

Conway, if appointed and approved by the Senate, would achieve the highest public office that a Filipino American holds and would be the first Asian-American solicitor general.

Conway’s name was little mentioned during the presidential campaign, though it was reported that he did make donations to the Trump campaign, as well as to previous GOP presidential candidates.

A longtime partner at the New York-based law firm Wachtell, Lipton, Rosen & Katz, according to his biography on the firm’s website, Conway graduated from Yale Law School in 1987, after attending Harvard College.

Throughout his career, Conway has represented high-profile clients, including the National Football League and tobacco maker Philip Morris. He also played a minor role in the 1998 impeachment of President Bill Clinton.

For other Filipino Americans, however, Conway’s potential nomination does little to curb their mistrust of the president-elect.

“During the campaign, Trump supporters made [some] disparaging remarks about Hillary Clinton’s Filipino housekeeper,” said Mary Villena, of Jacksonville, Florida. “I’m just surprised that I didn’t hear a peep from Kellyanne Conway about defending the housekeeper since she is married to a Filipino American.”

“Looking at his biography and his clients—they don’t scream social justice to me,” she added. “I really don’t think his Filipino heritage would be influential or of benefit to us.”

Some Filipino Americans also say that Conway would be an unusual choice for solicitor general, because of his lack of experience arguing cases before the Supreme Court.

So far, his law firm biography lists only one Supreme Court case that he has argued— a 2010 dispute involving the overseas reach of federal securities law.

His appointment, according to other Filipino Americans, would also raise questions about conflict of interest, considering his wife’s position in the Trump administration.

Although a solicitor general reports to the attorney general and answers to the president, decisions should be made independently of the White House.

“There’s definitely going to be a major bias in the decision-making process,” said N. Macasaet, a single parent from Jersey City, New Jerey. “I don’t know him [Conway], but I’m not sure if it [his appointment] is a good idea.”

“I really don’t know anything about his background, but I would like to see his community participation and find out whether it is going to be an asset or liability,” Lachica said.

“I hope he’d join us in what we are fighting for, especially equal rights for Filipino veterans and the growing conflict between the Philippines and China.”