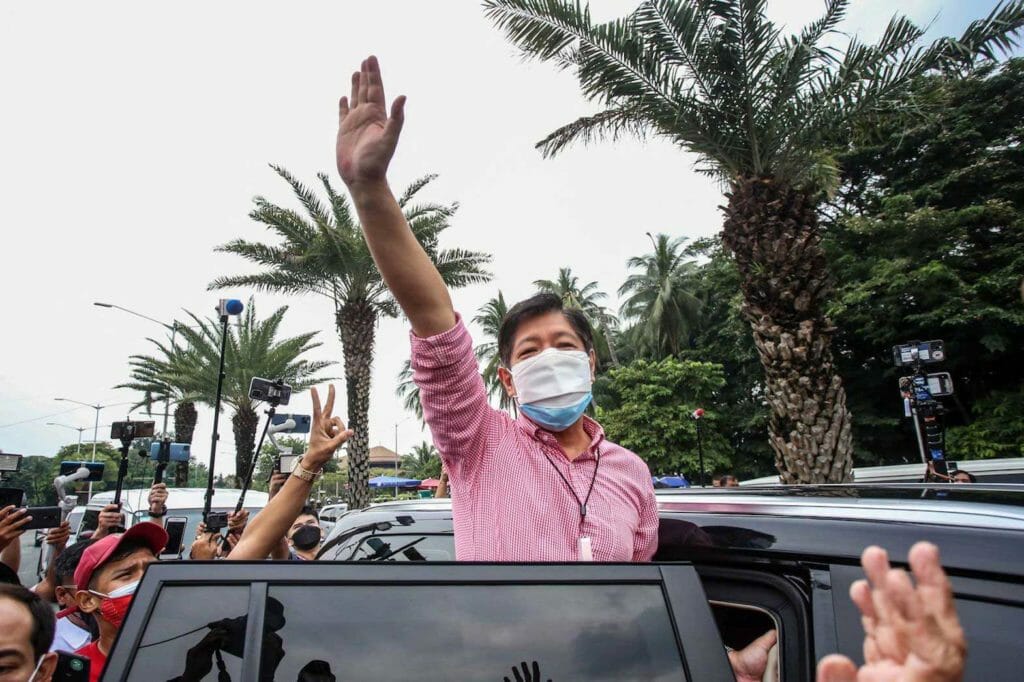 So Bongbong Marcos wants to be president. He better start acting like it. Frankly,  I’m more concerned about what his family has done with all the money it looted from the Philippines. It should be his business unless he was disowned. Or maybe he thinks it will be easier to sneak the plundered treasure back into the treasury if he were president.

If he wants to really separate himself from his late dictator father, he better start acting with a sense that he is somehow divorced from the ethics of his family, let alone from the history that sent his father into exile.

That means showing up to such things as the Jessica Soho interviews.

Being a no-show to that show smacks of the kind of arrogance of his father. Makes Filipinos ask the question, does the country need the second coming of Marcos?

Duterte was bad enough, rehabbing the Marcoses in life and in history. But those who lived through the Marcos years, those who fought it, and escaped it, as well as those who were stuck and forced to endure it, should know better.

Bongbong’s ability to wage a credible campaign at all will raise the already heightened  political notion of gaslighting.

Can you think of any dictator anywhere in the world whose offspring have been able to make a comeback bid? Anywhere in the world? Europe? Africa? Is there an instance where a scion comes back to rule and not get tagged by the sordid legacy of the family?

Usually there would be a name change involved. From Marcos to Marcus?

But it’s happening. What does it say of the country and its people that would allow it to happen? Are they sleep walking? Not paying attention? Or is everyone in the oligarchical political class all on the take?

So many questions. But who are we in America to talk?

America’s problem is the GOP

The former Gaslighter-in-Chief wants to run again. That would be Trump. He’s the guy who called Duterte “Duarte.” That hasn’t really changed the mind of a large group of American Filipinos who remain pro-Trump.

The problem in America is Trump’s hold on the GOP has made America ungovernable.

It’s not Joe Biden’s fault. Biden won fair and square. But he didn’t win in a fashion that would allow the Republicans to accept the truth. So the majority of Republicans simply cower and defer to Trump, accepting all his lies. And they’ve done it for the last year.

That has been Biden’s problem.

Biden needed a win in 2020 that was so convincing that Trump would be ashamed to show his face in Washington.

Unfortunately, the legal troubles of Trump about Jan. 6, about his companies’ financial dealing, about attempting to tamper with the election in Georgia are developing so slowly that they are almost irrelevant for now. Maybe later that will change. But for now Republicans are sticking with the crook they know. It would be moral to admit defeat, but look at how many Republicans insist, despite all the facts,  that 2 plus 2 equal 5.

It makes for a mockery of American politics. In fact, it is threatening our democracy.  A twice-impeached former president with impending legal issues with Congress, state prosecutors and federal prosecutors still is as powerful as he is.

Doesn’t give us much leverage to say Bongbong Marcos shouldn’t run for dogcatcher.

Which brings us to the Biden presidency, just over a year old.

The real news after that special news conference at Biden’s one year mark is that he wants to run again—for now.

Of all the questions asked, that one question was answered in the best way Biden could answer anything. Short. And to the point. Anything else may have seemed avuncular, but also more foggy than folksy.

The question was posed by NBC’s Kristen Welker: “You put Vice-President Harris in charge of voting rights. Are you satisfied with her work on this issue?”

But Welker wasn’t satisfied with an answer on just voting rights, she wanted the HR status of the first African American/Asian American woman to hold the second highest office in the land. Welker wanted news.

“Can you guarantee, do you commit that she will be your running mate in 2024? Provided that you run again?”

The little aside at the end was to loosen the question a bit. But Biden didn’t hesitate.

Welker, somewhat stunned by the brevity, asked, “Care to expand?”

“There’s no need to,” said Biden. “She could be my running mate, number one. And number two, I did put her in charge. I think she’s doing a good job.”

OK, the voting rights bills did not pass on Wednesday, blocked by Republicans and two Democrats, but we were prepared for that. (See last week’s column).

And even Biden’s short answer could be still be parsed if he doesn’t run or chooses someone else as VP.

But Biden was clearly in assumptive mode. He’s running. With Harris. Again. And he says he’s going to get out of his office and see people face-to-face around the country more. Sounds like a campaign.

That may be a way of jumpstarting his presidency, but it sounded more like jumping over the problems of today, which remain primarily Covid and the economy.

Biden needs to let us know he understands us out here

If President Biden really wants to jump-start his presidency, he simply needs to let us all know “he gets us.”

By that, I mean he needs to show he understands what all Americans are going through. Does he know the price of crispy pata at the point-point-joints? Or the Datu Puti at your supermarket?

He could have done it by showing us he knows Michelle Go.

Go, 40, is the Asian American success story from the San Francisco Bay Area, whose education took her from UCLA to an MBA in New York City, where she ultimately joined a major firm to make her life.

A week ago last Saturday morning in the Times Square subway station, while waiting on the platform, Go was on her way. Somewhere. Her future was bright.

But then she was suddenly pushed from behind.

Go never saw what hit her. She was out of balance and found herself on the tracks, when a hurtling train killed her.

Another in the more than 10,000 Asian American hate crimes since the pandemic began?

It’s still being investigated, but it looks like the perp, a homeless man off his meds, may have attacked at least one other person that day and was not targeting Asians.

It wasn’t like a subway push in 2012, when Sunando Sen was pushed from behind in New York and died. His perp, a woman, again off her meds, was charged with second-degree murder as a hate crime. She told investigators she believed Sen was Hindu or Muslim and shoved him in retaliation for 9/11.

That was a hate crime. What happened to Go may be a hate coincidence. Still horrifyingly tragic. Still hurtful. And still a problem. How do you prevent such a crime? Better yet, how do you protect innocent victims like Go? More policing in the subways doesn’t sound like an answer.

Sadly, this is not such an isolated situation. When Kendra Webdale was pushed onto the subway tracks and crushed to death in 1999, a law in her name was passed to make sure dangerous people off their meds were committed to treatment before they became violent.

For these big problems, we look to government, mostly state and local, to figure out, regulate, solve. But it’s a big ask. It’s an understatement to say it’s not easy. But we keep fighting for an answer.

So for now, Michelle Go’s memory best serves us all as metaphor.

Where we are now

Just like Michelle Go, we’ve been knocked down from behind. And now we’re all looking for a sense of normal. We’ve lost our balance. Even the president.

But there’s still time to look to each other to help us all get back up.

At the one-year point, people will talk about Biden’s approval ratings, which hover in the low-to-mid 40 percent range. Whatever it is, it’s higher than the previous administration. And that’s saying a lot.

He’s still not Donald Trump. And in November 2020, that was the best thing going for Biden.

Since then, Biden did get a massive infrastructure bill passed to fix our roads and bridges. The previous administration didn’t do that.

Biden has been reassembling the broken government Trump took apart and didn’t even fully staff.

And now instead of a Trump administration that fueled the denial of Covid and science, the country is catching up and getting closer to where we need for vaccinations and boosters. Tests and masks are being distributed for free.

In general, things are not perfect. But one year of Biden is better than a fifth year of Trump.

But it takes time to fully recover.

We’ve been knocked from behind and are seeking balance. Biden should know that. He kept mentioning in his press conference how he can’t believe not one Republican would crossover on anything. Build Back Better. Voting Rights. Yes, things are different from when he was a senator. There is no cooperation, not when the GOP is still dominated by the political stench of Trump. The world and politics have changed. During that two-hour press conference, Biden at times seemed like an older man driving, not sure when to put his foot on the gas or on the brake. Witness his Ukraine answers on incursion or invasion that seemed to set some people off.

To win at all cost, even at the expense of our democracy.

It leaves us with one bright spot going for Joe Biden. He’s still better than Donald Trump, the man who knocked the United States off balance.

But until Republicans come to their senses, we’re still struggling to find our way up and forward.