Obama dares GOP: Show me your health plan before repealing mine 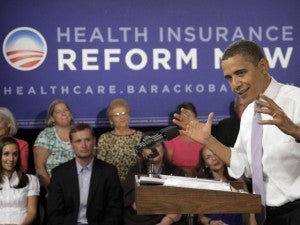 President Obama has challenged Republican lawmakers to present an alternative to Obamacare before repealing it. PINTEREST

Trying to protect his signature Affordable Care Act from being hastily dismantled by the new GOP Congress, President Barack Obama took to the media to pressure Republicans to unveil a replacement proposal before they repeal major parts of the law.

In an interview webcast by Vox.com and an op-ed in the New England Journal of Medicine, the president called Republicans’ fast-track plans to rescind much of the law but wait until later to craft a replacement “reckless.”

“People should ask their elected officials, ‘Tell me what you have that will be better before you take away what I already have,’” he told Vox.

In the medical journal, he wrote: “This approach of ‘repeal first and replace later’ is, simply put, irresponsible — and could slowly bleed the health care system that all of us depend on.”

Obama and Democrats on Capitol Hill have spent this opening week of the 115th Congress reminding people of the benefits the law has delivered — including historically high rates of insurance coverage and historically slow growth in health spending.

Meanwhile, the Republican Senate is already debating — with a vote scheduled for next week — a budget resolution that would direct House and Senate health committees to begin the process to repeal major parts of the law.

But now the president is taking a page from the playbook used by the health overhaul’s opponents, who during the congressional debate on the law organized mass protests in congressional districts across the country.

“Now is the time for people who have benefited or seen their families benefit to make some noise,” he told Vox. “I would urge everybody to make their voices heard.”

And at the same time, he said, voters should demand that a repeal vote not take place until the GOP replacement is available to study and debate.

“Why is it [that] they are trying to rush the repeal so quick?” he asked. “What are they afraid of?”

The president is not the only one expressing doubts about repealing major portions of the law without simultaneously replacing them. At least four Republicans in the Senate — enough to jeopardize passage of the repeal measure — have said publicly they are concerned about the trajectory congressional Republicans are on. Health industry groups — including the American Medical Association and American Hospital Association — have echoed those concerns, too.

As he has said many times, Obama told Vox that he would be more than happy to see some of the problems with the health law addressed, particularly high out-of-pocket costs for individuals and a lack of insurance company competition in many parts of the country.

“If you can in fact put a plan together that’s demonstrably better than what Obamacare is doing, I will publicly support repealing Obamacare and replacing it with your plan,” he said. “But I want to see it first.”

In his journal commentary, Obama echoed the findings of many recent studies that voting to repeal parts of the law will itself create uncertainty that could do damage. “Repeal and replace” is a deceptively catchy phrase — the truth is that health care reform is complex, with many interlocking pieces, so that undoing some of it may undo all of it,” he wrote.

For example, he added, “Insurance companies may not want to participate in the Health Insurance Marketplace in 2018 or may significantly increase prices to prepare for changes in the next year or two, partly to try to avoid the blame for any change that is unpopular.”

Still, Obama acknowledged that parts of the health law have not worked as well as he had hoped.

He told the Vox interviewers, the federal government “put a big slug of money” into encouraging medical providers to digitize their records. “And it’s proven to be harder than expected,” he added, with multiple systems that don’t communicate with each other and “there are still mountains of paperwork … It’s been a lot slower than I would have expected.”

Efforts to fix the problems with the law, he added, are at odds with some of the things Republicans have proposed over the years.

“Health care is not cheap,” he said. “Those areas that don’t work have to do with not having enough money in the system,” he added. “But that’s so far not what the Republicans are proposing.” In fact, leading Republican plans would take federal funding out of health care, by eliminating subsidies to help people pay for private insurance and lowering federal spending on the Medicare and Medicaid programs.

Obama suggested — as he has in the past — two fixes Republicans are sure to reject — increasing the subsidies to help individuals better afford premiums and out-of-pocket payments and creating a government-run “public option” to boost competition in areas with few insurers.

“We would love to see even higher subsidies,” he said. “But that costs money.”

And with less money, as the GOP is proposing, that could make Republicans’ job even harder.

“I think what you’re going to see is all the promises they made about how they can do it better, cheaper, everybody’s going to be satisfied — those are going to be hard to meet,” said Obama.