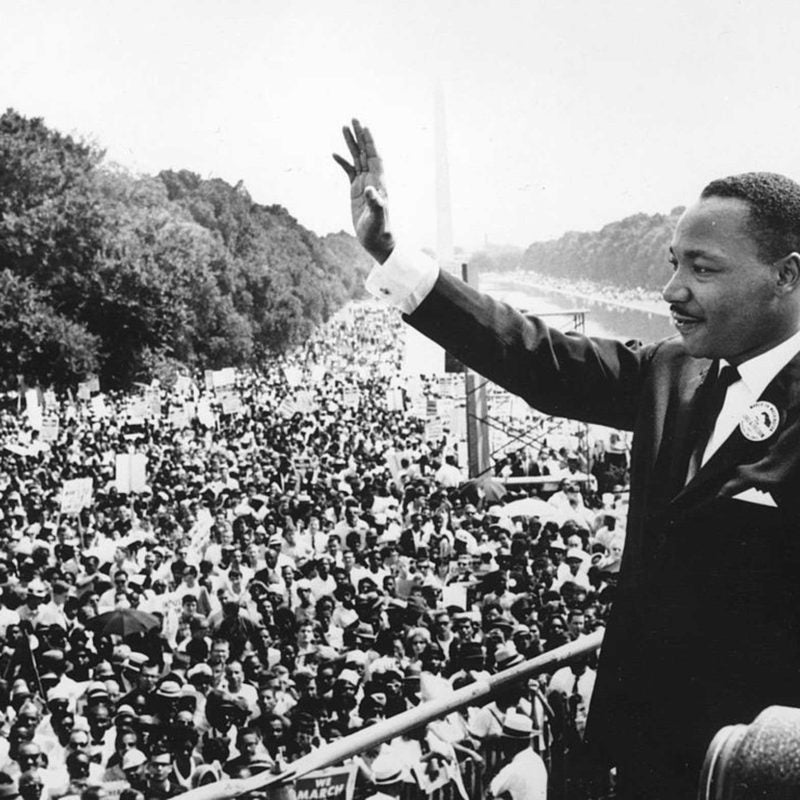 Dr. Martin Luther King Jr. during his “I Have a Dream” speech in Washington, DC. WIKIPEDIA

If you are a post-2000 immigrant to the U.S., take some time this week to think about democracy, your right to vote, and Dr. Martin Luther King. Jr.

Because of Hawaii’s Brian Schatz’s Covid quarantine, the symbolic vote in the Senate for voting rights won’t happen as expected out of necessity, not merely because of partisan pigheadedness.

It all puts a crimp on what is essentially our national holiday for civil rights.

The family of Martin Luther King, Jr. was adamant about MLK’s birthday. There would be no celebration without legislation.

At this point, we are not likely to get either. But we will have time to reflect. The fight isn’t quite over yet, which is why later in this column, I want to remember an Asian American activist who was influenced by King and knew how to take action.

But first, it wasn’t hyperbole after all to call President Biden’s speech from Atlanta his “I Have a Dream” speech.

Because he was dreaming.

He thought he could get Democratic Senators Joe Manchin and Kyrsten Sinema to unite with 48 other Democrats to pass both the Freedom to Vote Act and the John Lewis Voting Rights Advancement Act.

The Freedom to Vote Act would make voting a federal holiday, and make voting easier, not harder. It would also make sure the redistricting process would be fair and uniform and reflect population gains. Asian Americans and other people of color wouldn’t be left out by gerrymandering. The activism of AALDEF and other communities of color to draw up the Unity Map in New York is a direct response to the inequality of gerrymandering. There should be a law, right? This Freedom to Vote Act gets us closer to justice.

The John Lewis Voting Rights Advancement Act simply restores the teeth of federal oversight to make sure states don’t pass harmful election laws that cut minorities out of the process. We’re trying to get back to the ideals of the original law.

But they prove that the threat to democracy is real. Your freedom to vote is not an abstraction. Without it, you simply are voiceless and do not count.

In a democracy, the proposed voting rights legislation should be a no-brainer. But it isn’t.

Contrary to what right wing media is saying, President Joe Biden didn’t call anyone a racist in his voting rights speech this past week.

He simply asked a question: “Do you want to be on the side of Dr. King or George Wallace?”

Do you want to be with a person of love, or one of hate?

That’s a hard choice if you’re political animals like Sen. Mitch McConnell and Sen. Mitt Romney. They feigned offense at the question and even accused Biden of being the opposite of a unifier and more divisive than Trump. Is that even possible?

But this is where we are at the rock bottom in our modern Orwellian political reality, when yes is no and no is yes, and when things that should be passed by acclamation are up for debate.

Biden needs to get around the Republicans’ certain filibuster intended to block the legislation. That would require all 50 Senate Democrats to vote to change the filibuster rule.

And, of course, the same two people who blocked Biden on his big infrastructure bills are in the way now: Sen. Joe Manchin of West Virginia and Arizona Sen. Kyrsten Sinema, who herself took the lead to stymie voting rights.

That’s West Virginia, 40th in population in the U.S., and Arizona, 6th.  Both states holding up voting rights for the entire nation.

Sinema was almost cruel speaking on the Senate floor last Thursday, just as Biden was arriving to rally Democrats in Congress. She effectively announced she was killing all hope for meaningful voting rights legislation.

“While I continue to support these bills,” Sinema said, “I will not support separate actions that worsen the underlying disease of division infecting our country.”

But, of course, in signaling she would allow the Republicans to filibuster, Sinema was making things worse by enabling the “underlying disease of division infecting our country.”

Biden is still trying to get the legislation passed, but it’s unclear what Sinema wants in negotiation–beyond the orgiastic power of a presidential takedown.

But it makes clear what is true in a democracy. The president isn’t Superman. Not even a Marvel hero. At best, Biden is arm-twister-in-chief.  No doubt he beat Trump in November but with hardly a majority in the Senate, there are clearly limits to power.

It all leaves Biden, about to celebrate his first year in office, with a party he can’t unite when he needs, and a country that grades him with an approval rating in the low 40s.

Is it his fault? Look at what he inherited from Trump, arguably the worst president ever. Between that and Covid, Biden is doing as well as imagined. He did pass the physical infrastructure plan to fix a crumbling America. Given the circumstances that’s significant.

Vice President Harris offered Biden his strongest support, telling NBC News how in 2006, 98 of 100 members of the Senate voted for an extension of the Voting Rights Act.

“It was not a partisan issue,” she said. “It was an American issue.”

But in that time, this is how things have worsened.

And then she tried to use what bully pulpit she has to point out she wouldn’t absolve the 50 Republicans in the U.S. Senate from responsibility for upholding one of the most basic and important tenets of our democracy.

Nor would she give a pass to Sinema and Manchin.

“I don’t think anyone should be absolved from the responsibility of preserving and protecting our democracy,” Harris said. “Especially when they took an oath to protect and defend the Constitution.”

It’s Harris’ promise to expose the politicians who voted “no” as being quite simply anti-democracy. Let’s hold her to that.

Of course, all that presumes shame and common sense still work in American politics. Not these days.

An Asian American in King’s camp

So as we approach the King holiday, let us try to be King-like and remember an Asian American who was close to Dr. King.

In the assassination year of 1968, Steven Kiyoshi Kuromiya cared for Dr. King’s kids at the family house the week of MLK’s funeral.

Beyond a caretaker, Kuromiya was no slouch as an activist.

Kuromiya first met King in 1965, when Kuromiya was a member of the Student Non-Violent Coordinating Committee (SNCC) and later a member of Students for a Democratic Society (SDS).

In a Life magazine piece, Kuromiya talked about his role marching at Selma:

I was in the South during the spring and summer of 1965. After Reverend James Reeb was killed, we marched and I was clubbed down and hospitalized. When you get treated this way, you suddenly know what it is like to be a black in Mississippi or a peasant in Vietnam. You learn something about going through channels then too. I gave my story to an FBI agent in the hospital. He took seven pages of notes, but I remember thinking at the time it was probably just about as effective as relaying information to the ACLU via the House Un-American Activities Committee. Nothing ever came of it, at any rate.

But something did come out of his relationship to King. Kuromiya saw the value of taking non-violent direct action, and he used it the rest of his life for the public good.

If you want to be a rebel in the name of voting rights, Kuromiya would be a good role model.

Born while incarcerated by the U.S. in a Wyoming internment camp during World War II, Kuromiya experienced world-class discrimination.

His family later moved to Monrovia, California, and Kuromiya went on to college at Penn. As a student, he made sure his voice was heard in the biggest issues of the day, the antiwar and civil rights movements.

Like Dr. King, Kuromiya knew that protest and the media go hand in hand. To draw attention to the use of napalm in Vietnam, he staged an event where a dog was threatened to be burned alive on the library steps at Penn. When thousands turned up, they saw Kuromiya’s message: “Congratulations on your anti-napalm protest. You saved the life of a dog. Now, how about saving the lives of tens of thousands of people in Vietnam?”

Later, Kuromiya became a legendary fighter for AIDS research, known as the founder of Critical Path and a member of ACT-UP. Their creative non-violent actions kept issues important to them in full public view.

When you think about Dr. King, remember that the fight for civil rights was never just a black and white thing.

Asian Americans have stood with Dr. King and learned from him in our common struggle for equality.

The best among us don’t give up, like Steven Kiyoshi Kuromiya, who fought until he could no longer. And is there a doubt how he’d answer Biden’s question: The world of Dr. King or the world of George Wallace?

Kuromiya had the courage, the fight, and the love to answer.

It’s what’s  we all need in our never ending struggle toward social justice.

Emil Guillermo is a journalist and a commentator. See his “Emil Amok’s Takeout” on YouTube, Facebook @emilguillermo.media, or Twitter @emilamok. [email protected] Pacific; past shows, www.amok.com

MOST READ
usa Monkeypox: Should the world be concerned?
usa The latest on the tragic Texas school shooting that left 19 children, 2 adults dead
usa Top 10 Richest Companies in the World as of 2022
usa Fil-Am graduates with 7 trade certificates from San Diego college
usa Ethereum co-founder warns of crypto crash – ‘Pay more attention’
usa California to pay college students for community service
usa Quo Vadis, Philippines: Part II
DID YOU KNOW?
The Best Kindle of 2022: Which one should you buy?
A Beginner’s Guide to Buying a Vacuum Cleaner in 2022
Island Hopping in Tulum: The 12 Best All-Inclusive Tulum Resorts
How to Dispute a Debt and Win | Simple Tactics
The 12 Best Lat Exercises for Muscle Growth
Countdown to summer: tips for learning how to surf