LOS ANGELES — An upscale Southern California ocean front resort has been accused of human trafficking violations and exploiting its foreign interns, a majority of whom are from the Philippines and other Asian countries.

According to the complaint, the couple from Kolkata, India were “lured with false or misleading promises to the United States to participate in a bogus ‘internship’ program,” together paying thousands of dollars and taking on debt to participate in what they were promised would be an educational experience in the culinary arts.  Instead, they were reportedly put to work as ordinary employees.

The case alleges that the luxury resort has been substituting entry-level line cook positions — designated as “Cook III” — with immigrant workers on J-1 visas, which offer cultural and exchange opportunities in the U.S. through programs like summer work travel, student exchanges, and internships among others.

Most workers from PH

Most of the J-1 visa workers are from the Philippines, said the complaint.

Tuason told the Los Angeles Times that he spent approximately five months in the room service kitchen before being allowed to transfer to the cold kitchen. He spent the rest of his internship making salads and peeling fruit.

“I felt like a manufacturing machine,” the Los Angeles Times quoted Tuason saying.  “I knew it was going to be hard work — I was expecting that.  But I was at least expecting to learn something from it.”

Some interns like Rahman and Rashid come from India and other Asian countries.

Unite Here asserted that by 2017, the resort had employed around 45 interns across its kitchens, replacing much of its entry-level cook workforce.  The interns were said to have had the same tasks as regular Cook III workers, but had to pay large placement fees, were paid less, and did not receive benefits or raises.

He added, “Though this is not a typical trafficking case, these laws protect against the types of abuses Wahid and Falak say they experienced at the Terranea.”

Jessie Burns, a spokeswoman for Terranea, told the Los Angeles Times that the allegations were baseless, adding that the resort has been offering culinary internships through the visa program since 2011, with over 160 students having completed the yearlong program.

“We are very proud of the students who have trained and who have gone on to launch their own culinary journey,” the Los Angeles Times quoted Burns saying.  “Some of our interns have successfully opened their own restaurants, and become sous chefs and chefs at other resorts.”

That was the hope of Rahman and Rashid — both recent culinary graduates from the International Institute of Hotel Management in Kolkata — who saw the internship program as a way to further their career and bring them closer to their goal of opening a restaurant back home. 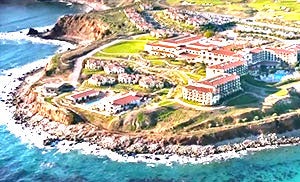 Terranea Resort boasts a 102-acre estate of natural beauty, nearly 600 guest rooms and suites, and eight dining options that “range from gourmet cuisine to casual fare — all set against the Pacific Ocean.”

The complaint said that the two were promised a valuable educational experience through working in a variety of kitchens and departments, learning various cuisines, and learning about the resort’s operations as part of their internship placement plan.  They were also promised opportunities to take part in cultural experiences like trips to places like Disneyland.

The plan also ensured that they would not be filling a labor need.

Rashid and Rahman said they were instead quickly put to work making pizzas, flatbreads and salads for customers.  A knife safety video, an explanation of how to read kitchen tickets, and a summary of recipes were the only training materials the two received.  Any additional guidance they got was primarily from other interns.

The couple further said that they did not receive promised help in finding housing.  Rather, they were put in touch with a current employee who suggested zip codes and cities to search through on the internet and mentioned a building other J-1 interns stayed at but had no vacancies.  Upon arriving in the U.S. for their internship, the two were forced to spend their first night at another hotel, according to the complaint.

Had to buy own supplies

The complaint also said they were required to buy their own supplies like specific branded knives, and shoes.  All in all, the couple’s expenses for the program exceeded $12,000, much of which required them and their families to borrow money.

Unite Here seeks reimbursement for Rashid and Rahman, and that the State Department conduct an investigation of Terranea’s internship program.

Other J-1 visa program participants have complained, saying that they were paying to receive culinary training only to be put to work in the kitchen, said Cohen.

“Permanent kitchen staff also complain that they have to show the J-1 interns how to do basic parts of the jobs just so the kitchen can function,” he added.

“We unfortunately see all kinds of abuses of temporary workers.  It’s common for companies to exploit the vulnerabilities these programs can create, and while there have been well-documented cases of J-1 visa holders being exploited, it is very unusual to see these many J-1 interns in a single hotel,” said Cohen.

The resort found itself in another class-action lawsuit earlier this year for failing to pay workers for full hours worked, pay meal and rest breaks, and reimburse for kitchen supplies.  Back in 2011, Terranea settled a $1.1 million class-action lawsuit that said the resort was not paying minimum wages or for overtime as required by law.