LIHU‘E, Hawaii —  In remote Lihu’e on the island of Kauai, Rose Batangan of Rose’s Pinoy Favorites at the Kukui Grove Center on Dec. 30 coordinated a nearly day-long celebration with historical anecdotes on martyr and Philippine national hero Dr. Jose Rizal, as well as songs, dance and prize giveaways at the Kukui Grove food court.

Melissa McFerrin Warrack, Kukui Grove specialty leasing and event manager said, “The Rizal Day celebration marks the end of a year where we were able to successfully celebrate the many cultures of this island despite the Covid-19.”

Rizal Day brought together about 10 businesses and service organizations that offer services to the Filipino people as well as the general public. The Department of Health/Ho‘ola Lahui Hawai‘i offered information and information packets on controlling the spread of COVID-19 and its Omicron variant along with a variety of other subjects, including smoking cessation and family and individual well-being. 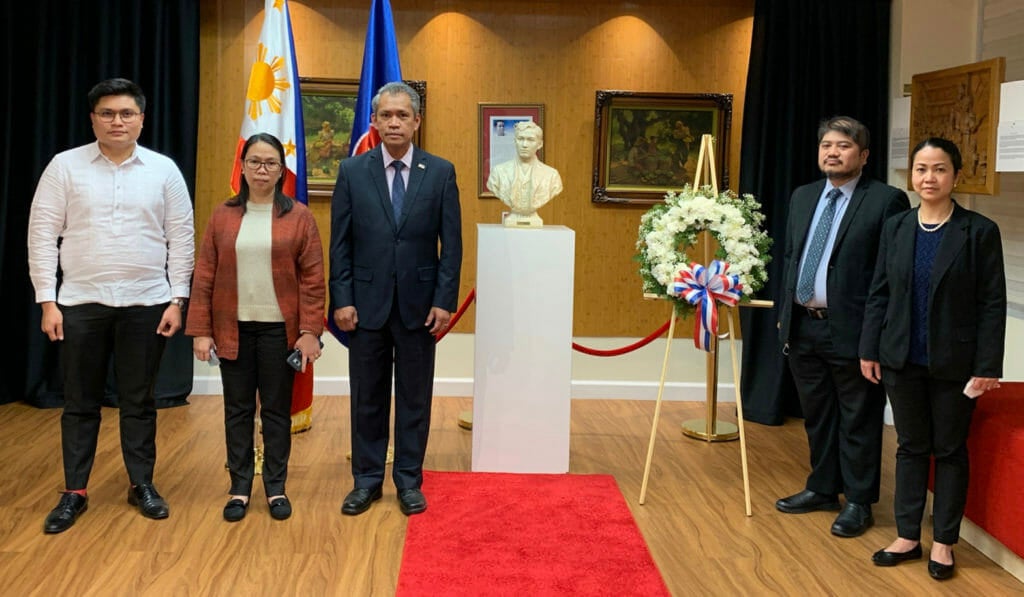 Consulate officers and staff joined Consul General Ferrer in paying tribute to the Philippine national hero at the Sentro Rizal, the hub for Philippine culture, history and the arts in San Francisco.

In his Rizal Day message, Consul General Ferrer said that “Rizal’s love for his motherland led him to expose the excesses and abuses of those in power… His heroism in the face of death continues to inspire Filipinos to fight for truth and justice, unite in the face of insurmountable challenges, and become agents of positive social change.”

As the Philippines and the United States celebrate 75 years of formal diplomatic relations, Consul General Ferrer also noted the two countries’ shared history by citing the connection between Rizal and San Francisco.

“Rizal visited America in 1888 with San Francisco as his very first stop, after spending seven days in quarantine off the San Franciscan coast. He stayed from May 4 to 6, 1888 at the exquisite Palace Hotel along Market Street… Today, one can see a marker on Rizal’s stay in San Francisco on the exterior wall of the Palace Hotel,” Consul General Ferrer said.

The Consulate through its Sentro Rizal also honored the Philippine national hero through the CineRizal Online Film Festival, which showcased films and documentaries on Rizal’s life, sacrifice and legacy.

The CineRizal Online Film Festival featured the world premiere of “Rizal’s Pen”, written and directed by Palanca Hall of Famer Nicholas B. Pichay, and produced by the National Commission for Culture and the Arts.

The other films in the online fest were: “Jose Rizal: Sa Landas Ng Paglaya” (Jose Rizal: On The Path To Freedom), produced by the National Historical Commission of the Philippines; and Dr. Ambeth Ocampo’s “Rizal Without The Overcoat” and Paolo Ven Paculan’s “Mga Tagông Detalye Sa Noli Me Tángere (The Hidden Details In Noli Me Tángere)”, produced by the Areté of the Ateneo de Manila University.

All four films and documentaries were streamed on Rizal Day, 30 December 2021, via the Consulate’s official Facebook page.