‘Blessed is the fruit of thy womb’

‘Blessed is the fruit of thy womb’ 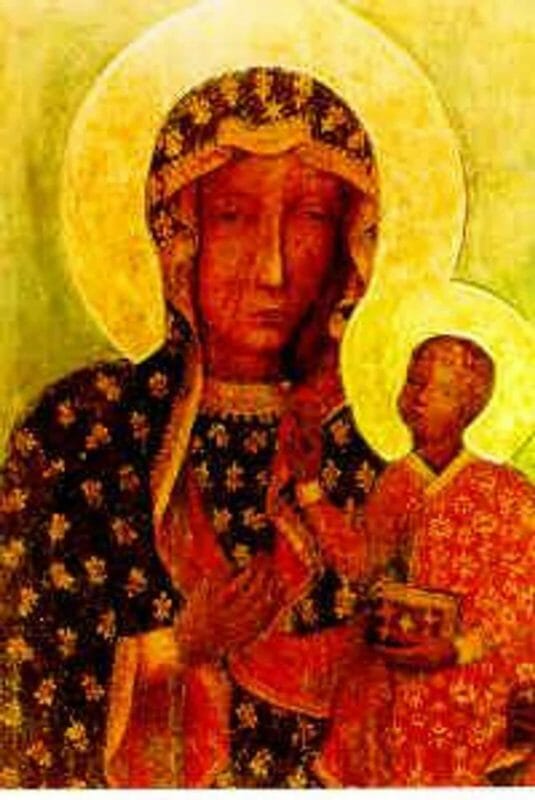 The Black Madonna of Częstochowa, Poland

Hence, the Catholic calendar dedicates the full week from December 25 to January 1, with one Sunday in between, to the Child, His mother, and to the Holy Family.

To the Blessed Virgin Mary, we give the highest possible tribute called hyperdulia in Greek. After all, “Mother Mary is the only person who carried Jesus for nine months in her womb (March 25 to December 25), one or two years in her arms, and forever in her heart. So, how on earth will Jesus not allow us to honor His mom that much? So, to honor her, the Catholic calendar provides the joyful celebrations of the “Word was made Flesh” in Mary’s womb, its preparation and accomplishment “in the fullness of time” (Galatians 4:4).

March 25 – Jesus was conceived by Mary without a biological father;

How can there be an expiatory sacrifice without a victim? How can there be death without flesh to be nailed and blood to be poured out? If Mary, the divinely appointed Theotokos, gave us the Saving Victim to be crucified, it is just inconceivable to talk of Salvation History, particularly the Paschal Mystery, without including the divinely designed role of Mary.

A pregnancy souvenir: Cells that are not your own. Because the womb of Mary is significant in Salvation History, allow me to call your attention to the contemporary scientific findings regarding the mother and child genotyping called “feto-maternal microchimerism.” Pathologists at Leiden University Medical Center in the Netherlands collected tissue from 26 women who died during or just after pregnancy. All of them had been carrying sons in their wombs.

Given: A boy has one X and one Y chromosome, while a girl has two X chromosomes. The scientists checked for Y chromosomes, looking for male cells in female bodies, and found abundant cells with Y chromosomes in every tissue sample they examined. The male cells were abundantly present in the mother’s every organ: brains, hearts, kidneys and others (Molecular Human Reproduction).

What do we assume with these findings? First of all, keeping in mind “feto-maternal microchimerism,” we can infer that Jesus’ cells transferred across the placenta into His mother’s brain, heart, kidney, and others – making them sacred physical spaces.

Secondly, Dr. Kristin Marguerite Collier, Assistant Professor of Internal Medicine at the University of Michigan Medical School, said that Jesus Christ (True God) redeemed every stage and aspect of human pregnancy and birth, a natural process through which He has developed as a human person (True Man).

Thirdly, I should mention the deduction made by Saint Alphonsus de Liguori, CSsR (1696–1787): Caro Jesu caro Mariae est. It means the flesh of Jesus is one-hundred percent “flesh of Mary” because Jesus was conceived by the Holy Spirit in the uterus of the Virgin who “knew no man.”

To conclude, even after His Virgin Birth, when Jesus physically left His Mother’s womb, part of Him remained in her and remains in her forever. It means that, after the first Christmas, Mary kept a pregnancy souvenir, just like all mothers, consisting of stem cells that are not her own. “Why remains in her forever?” Like Jesus, YHWH God didn’t allow Mary’s body to suffer the corruption of the body, so much so that at the end of her earthly life both her body and soul were assumed into heaven (August 15).

Today, we salute thee, dear Mother of God, in the words of Elizabeth, “Blessed are you among women and blessed is the fruit of thy womb, Jesus” (Luke 1:39ff).

Jose Mario Bautista Maximiano (facebook.com/josemario.maximiano) is the author of WHY REMAIN A CATHOLIC? (St. Paul’s, 1992)and THE CHURCH CAN HANDLE THE TRUTH (Claretian, 2017).