Snowy owls wintering in US fitted with tiny tracking devices

Snowy owls wintering in US fitted with tiny tracking devices 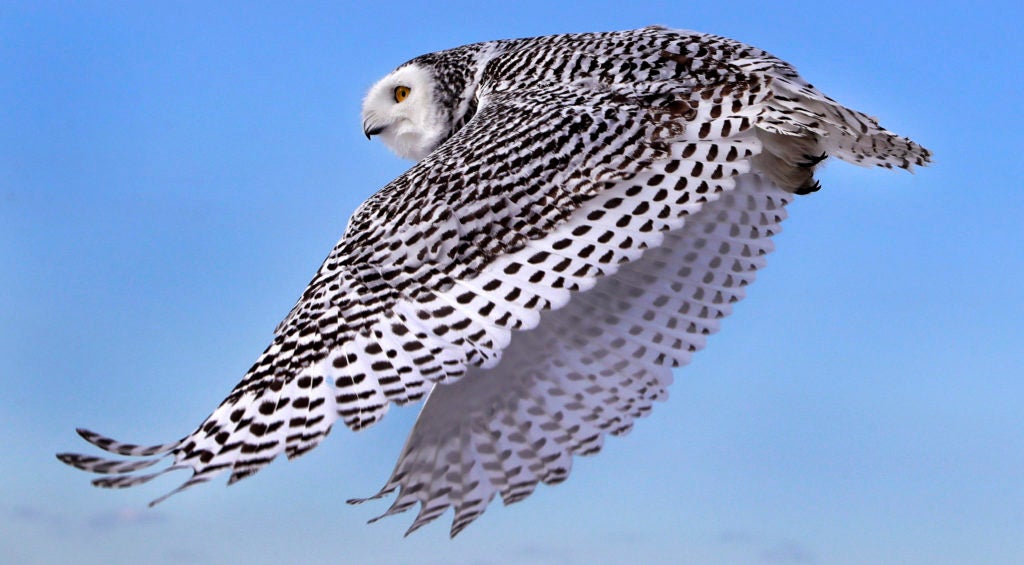 In this Dec. 14, 2017 photo, a snowy owl flies away after being released along the shore of Duxbury Beach in Duxbury, Mass. The owl is one of 14 trapped so far this winter at Boston’s Logan Airport and moved to the beach on Cape Cod Bay. The large white raptors from the Arctic have descended on the northern U.S. in huge numbers in recent weeks, giving researchers opportunities to study them. (AP Photo/Charles Krupa)

CHICAGO (AP) — Scott Judd trained his camera lens on the white dot in the distance. As he moved up the Lake Michigan shoreline, the speck on a breakwater came into view and took his breath away: it was a snowy owl, thousands of miles from its Arctic home.

“It was an amazing sight,” said Judd, a Chicago IT consultant. “It’s almost like they’re from another world. They captivate people in a way that other birds don’t.”

The large white raptors have descended on the Great Lakes region and northeastern U.S. in huge numbers in recent weeks, hanging out at airports, in farm fields, on light poles and along beaches, to the delight of bird lovers.

But for researchers, this winter’s mass migration of the owls from their breeding grounds above the Arctic Circle is serious business.

It’s a chance to trap and fit some of the visitors with tiny transmitters to help track them around the globe and study a long-misunderstood species whose numbers likely are far fewer than previously thought, researchers say.

“There is still a lot that we don’t know about them … but we aim to answer the questions in the next few years,” said Canadian biologist Jean-Francois Therrien, a senior researcher at Hawk Mountain Sanctuary in Pennsylvania.

The solar-powered transmitters can last for years, collecting information such as latitude, longitude, flight speed and air temperature that is downloaded to a server when the birds fly into range of a cell tower.

The use of transmitters, which intensified during the last North American mass migration in winter 2013-14, already has yielded big surprises. 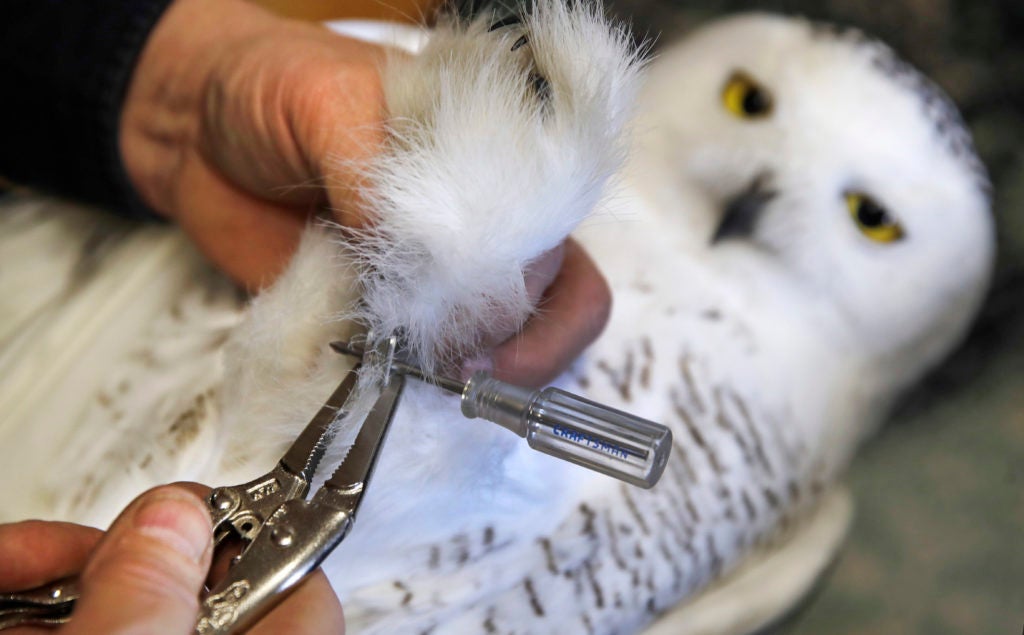 In this Dec. 11, 2017 photo, Norman Smith, director of Mass Audubon’s Blue Hills Trailside Museum, sizes a metal band to the fibula of a snowy owl, which was trapped at Boston’s Logan Airport, at the museum in Milton, Mass. The owl is one of 14 trapped so far this winter at the airport and moved to a beach on Cape Cod Bay. The large white raptors from the Arctic have descended on the northern U.S. in huge numbers in recent weeks, giving researchers opportunities to study them. (AP Photo/Charles Krupa)

Instead of 300,000 snowy owls worldwide, as long believed, researchers say the population likely is closer to 30,000 or fewer. The previous estimate was based on how many might be able to breed in a given area.

That calculation was made assuming snowy owls acted like other birds, favoring fixed nesting and wintering sites. But researchers discovered the owls are nomads, often nesting or wintering thousands of miles from previous locations.

The miscalculation doesn’t necessarily mean snowy owls, which can grow to about 2 feet long (60 centimeters long) with 5-foot (1.5-meter) wingspans, are in decline. Scientists simply don’t know because they never had an accurate starting point.

This month, snowy owls were listed as vulnerable — one step away from endangered — by the International Union for Conservation of Nature. They’re protected in the U.S. under the Migratory Bird Act.

This year’s mass migration is a bit of good news. Researchers once thought these so-called “irruptions” signaled a lack of prey in the Arctic, but now believe the opposite: Breeding owls feed on lemmings, a rodent that lives under Arctic snowpack and whose population surges about every three or four years. More lemmings means the owl population explodes— and that more birds than usual will winter in places people can see them.

But researchers worry that climate change will affect the owl population because lemmings are exceptionally sensitive to even small temperature changes.

Lemmings “depend on deep, fluffy, thick layers of insulating snow” to breed successfully, said Scott Weidensaul, director at Project SNOWstorm, an owl-tracking group whose volunteers have put transmitters on more than 50 snowy owls in the past four years .

The snowy owl population collapsed in Norway and Sweden in the mid-1990s, all but vanishing there for almost two decades before reappearing at lower numbers, experts said. In Greenland, where the population collapsed in the late 1990s, researchers found a few nests in 2011 and 2012 after six years with no recorded nests, but owls didn’t come back in 2016 or 2017, when lemmings should have been peaking.

The National Oceanic and Atmospheric Administration reported this month that the far northern Arctic is warming twice as fast as the rest of the globe.

But it’s tough to assess lemming population trends in remote areas. Although researchers hope to enlist native villagers to help, it’s mostly up to owls with transmitters for now.

Snowy owls somehow seem to find lemmings even if they are thousands of miles from where their population last peaked, Therrien said.

“They look around the Arctic,” he said. “The movement is amazing to watch on a map: There are no straight lines. They’re zigzagging.”

“It’s amazing what we’ve learned, but we need a bigger database of birds,” said Smith, who has been trapping owls at Boston’s Logan International Airport for more than 35 years and fits them with a leg band or transmitter before letting them go. He put a satellite tracker on an owl for the first time in 2000, proving that they could make it back to the Arctic.

Last week, Smith released a young female on a barrier beach along the Atlantic Ocean. It flew south, then circled back and flew overhead. As he drove over a bridge to the mainland, the owl was sitting on a post, surveying its new winter home. KI