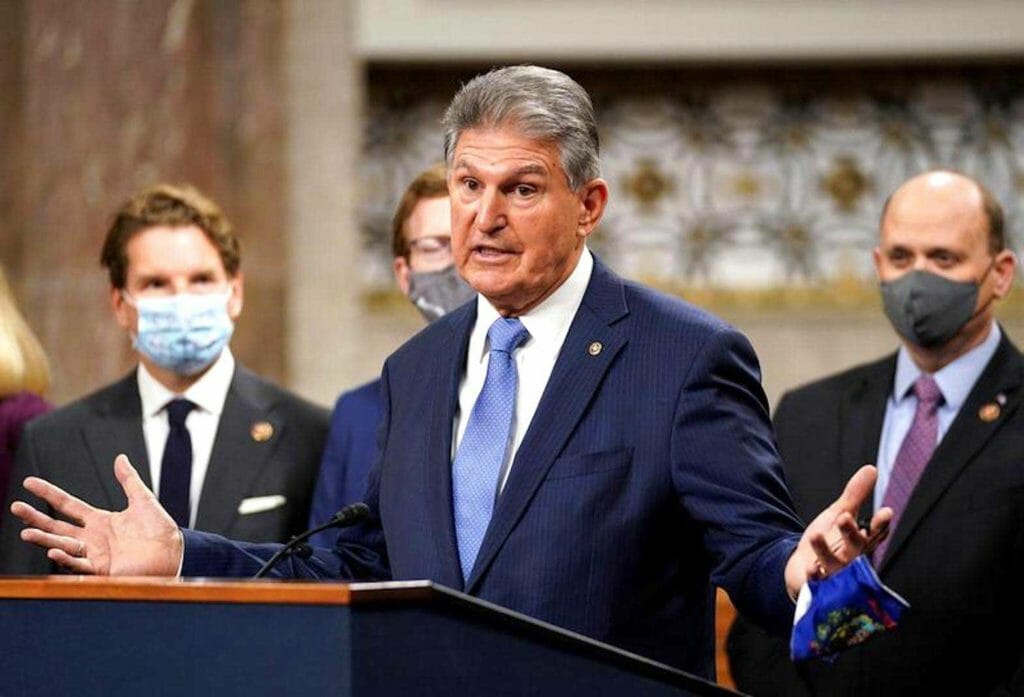 Sen. Joe Manchin, a thorn in the side of Pres. Biden’s Build Back Better bill. REUTERS

Sen. Joe Manchin, the West Virginian of who-knows-what political party, is a one man policy typhoon. He’s a tycoon too. But what he’s done is wreck Christmas for a majority of Americans now that he’s backed out of the Build Back Better Act. That’s the legislation that would have given Americans the broad social support from everything from child care to a pathway to immigration for DACA recipients.

Instead, Manchin is giving us all a taste of his state. It’s the second largest coal producing state in the nation. What did you expect for Christmas? A lump of ube?

So, it is less likely going to be a sweet Christmas and more of a lumpy coal Christmas. And it will be worse if you insist on gathering without a vax, booster, mask, and rapid test.

But you know risk. You came to America. My suggestion? Stay home. Listen to all the episodes of “Emil Amok’s Takeout.”

But don’t despair, some young people are getting a nice Christmas message from the college of their choice, especially if that college was Harvard.

The regular deadlines aren’t until Jan. 1st for many schools, but if you were an eager beaver and applied early, schools sent out their admissions.

Harvard – the target of a major lawsuit now before the Supreme Court claiming discrimination against Asian Americans — accepted 7.9 percent of the 9,406 people who applied early. And the largest group of early admits? Asian Americans.

Latinx students were at 10.5 percent compared to 10.4 last year.

Native American and Native Hawaiians were at 3.7 percent up from 1.3 percent.

Those are the numbers. Sense any overt discrimination against Asian Americans?

The school doesn’t give any specific Asian ethnicities, but there’s got to be a Filipina/o or two in the mix in that 25.9 percent AA number.

In fact, if you want to see Asian Americans at Harvard, read the Harvard school newspaper, the Crimson. One story this week on the Covid surge on campus was written by two Asian Americans, and nearly every source quoted in the story was an Asian American.

The most read story in the paper is by a Filipino American editor, on colonization in the Philippines. Another story is about a new piece of matter in quantum physics discovered at Harvard, the quantum spin liquid, where a particle is connected despite spatial separation. The writer of the story? Another Asian American student.

Before you fall prey to the argument that Asian Americans are discriminated in admissions at Harvard, the truth is quite the opposite.

They get in. They are part of the community, and they are thriving in 2021.

That’s a far cry from my experience more than 40 years ago, but that’s good. That’s called real progress.

You’ll recall some Asian Americans are being used by a white conservative group to fight the legal consideration of race in admissions at Harvard.

These white proxies were essentially used as human shields in the battle against what some call “affirmative action.”

In national polls of Asian Americans, the community is overwhelmingly in favor of affirmative action.

But when you get rejected from Harvard and think you’re qualified, you change your mind. The claim is you’re being discriminated against on the basis of race.

But the white proxies keep persisting. They lost in the district court, lost again in the federal court of appeals, and now they’re asking the Supreme Court to take up the case.

Before hearing it, the court asked the Biden administration to submit a brief, apparently to buy time. When you have a 6-3 conservative majority, the court is giddy with rollback fever. Abortion rights, voting rights, civil rights. The dance card is filled. Affirmative action, take a number.

The Biden administration has since come up with that brief  backing p the lower courts’ view of Harvard’s admissions that Asian Americans have not been discriminated.

Yet, the new rhetorical claim of the white proxies is that Asian Americans are now scapegoated because of the failures of the educational system. Hmm, Asians Americans were scapegoated by Trump over what he called the “China Virus.” This is a new twist. Now Biden is scapegoating Asian Americans trying to get into Harvard?

For the conservatives, I’d say it’s what used to be called “the old college try.”

The thinking is if a 4.0 Asian American doesn’t get in, then is it fair if another person of color with lower grades gets in? (Incidentally, Harvard just followed the path of other top schools like the University of California to eliminate use of the SAT/ACT).

The proxies really believe that admissions should be totally numerical. Rank by grades, top scorers get in. If that’s 100 percent Asian American, so be it. Fair is fair?

But didn’t the fight for equity begin when Harvard was 100 percent white?

100 percent Asian may work in an Asian country, but not in a diverse America.

Harvard’s admissions actually follow the guidelines set by previous court precedents that state how race can be used in conjunction with other factors. Race is not the sole factor, and neither are just grades or just test scores. Or your violin solo.

And quotas are always illegal.

Admissions at Harvard complies with the law, which has been considered settled for so long. Like Roe v. Wade in abortion. But the disgruntled keep filing lawsuits. And now the court is 6-3 wrong in their favor.

Was their discrimination against Asian Americans? Not of the kind that was illegal. But now there are enough conservatives on the court to change how the entire country views “affirmative action.”

So, the fight continues, and now even the white proxy Asian Americans are going full-victim now by using in their rhetoric that term “scapegoat.” They believe that Asian Americans are being punished and blamed for doing well because they perceive others less qualified (white, Black and Hispanic, but mostly the latter two) are taking their rightful space at Harvard.

Get over yourselves. And ask what’s the harm? The application fee? Get a refund. Then take your Harvard rejection and your 4.0 to UC Santa Barbara and be the world beater you were meant to be.

Stop seeing education as if it were a Hermes bag. The H on the label means nothing. And UC Santa Barbara is no Harvard knockoff.

Plus, there’s the beach.

Just remember, after all these years, beating Harvard in court isn’t the answer.  It won’t end  educational disparities, or inequities up and down the diverse rainbow. To do that you have to go deep into the K-12 structure and change that.

And remember too that no Asian Americans are scapegoated, let alone victimized.

You’ll understand all this when you finally realize how Asian Americans are being used by conservatives as their white proxies. And that more than admissions or affirmative action, that’s what’s more racist and disgusting about this never-ending legal battle.

Now, if you got in to your first choice school, and it happens to be Harvard, congratulations. And know it can either be liberating, or a further step into colonial mentality. I’ll have more to say about that in a future column and podcast.

But we end with a Christmas wish—that you vaccinate and booster and help fight this virus war, against Covid and all its variants. Don’t go in the fight without your best weapon, which isn’t some false sense of anti-jab patriotism.

We extend the abnormal by thinking its normal out there.

Make the right choice to stay safe and healthy. And out of harm’s way.

Have a Merry Amok Christmas. And listen to my special Christmas greeting coming on Christmas Eve on www.amok.com I tell the story of my favorite Christmas.

Emil Guillermo is a journalist and commentator. He writes a column for the North American Bureau. Get Emil Amok’s Takeout on Apple podcasts. Listen to his daily show @2p Pacific Live on Twitter @emilamok;  [email protected]. ; His YouTube channel; More on www.amok.com.