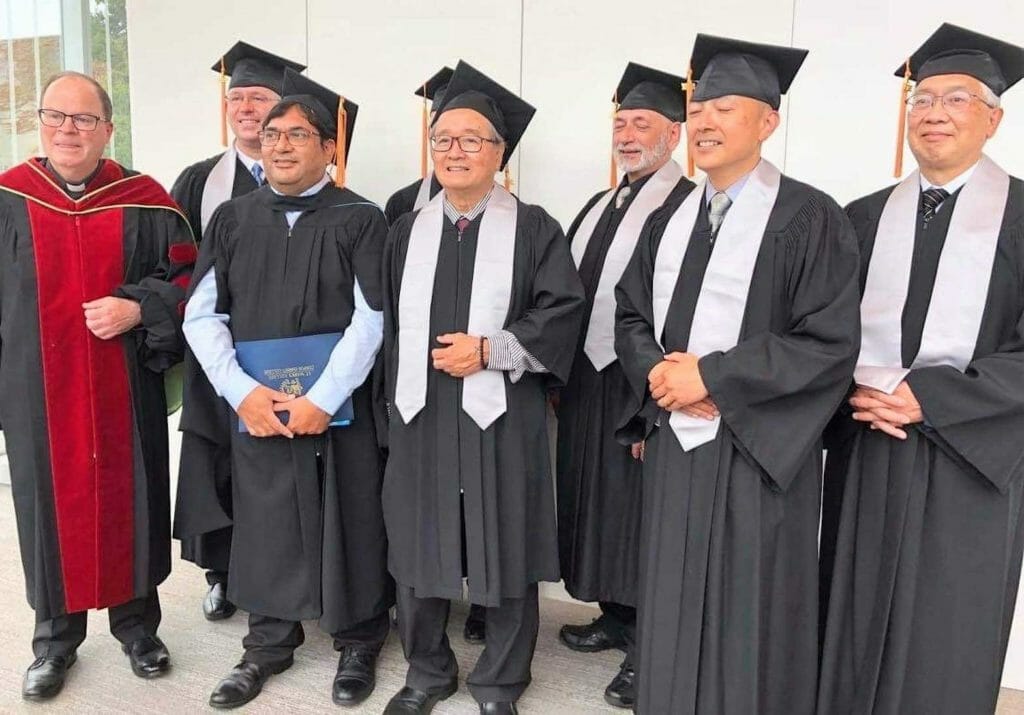 Msgr. Gregory Smith, director of the Permanent Diaconate Office, with new deacons at their graduation. BC Catholic

You can’t take the Catholic out of many Filipinos, which may explain why so many of the Archdiocese of Vancouver’s 34 permanent deacons are Filipino.

Six Filipino Canadian deacons have been ordained in the ten years since Archbishop J. Michael Miller officially restored the permanent diaconate, according to The BC Catholic.

Serving as a permanent deacon is especially attractive because the permanent diaconate is not available in the Philippines.

Deacons are ordained clergy who are not priests. Their special role is to assist priests. A permanent deacon must be at least 35 years old, has completed his Sacraments of Initiation (Baptism, Eucharist, and Confirmation), been a Lector and an Acolyte, and completed a thorough formation program.

According to the “Archdiocese of St. Paul and Minneapolis, “If a candidate for the diaconate is married, he must receive the consent of his wife before he is eligible for ordination. Once ordained, if the deacon’s wife should die, the deacon is not eligible for remarriage.”

The first three to enter the deaconate in Vancouver, British Columbia were: Deacons Greg Barcelon, 71, who heads the Filipino Ministry of the Archdiocese of Vancouver and serves at All Saints Parish in Coquitlam; Raul Abella, 68, who is retired and serves at Precious Blood in Surrey; Alvin Rint, 54, who serves at Holy Rosary Cathedral and also works at the Catholic Charities Men’s Shelter.

Following later were: Deacons Vic Gallamos, 67, who is retired and now serves at Abbotsford Regional Hospital and the Prison Ministry; Wilfred Victoria, 65, a marketing and sales consultant who serves at St Monica’s Parish in Richmond and is a chaplain at the Vancouver International Airport; and Greg Canero.

All six men attributed their calling to their religious upbringing. “I come from a family of priests and nuns,” Gallamos told the The BC Catholic. “The call to the diaconate was a slow burn for me. I really didn’t see myself serving as a deacon, but in God’s time, I answered his call.”

Victoria heard the call as a student at St. Andrew’s School in Paranaque, the Philippines, where the boys were asked if they were interested in entering the priesthood.

“I was thinking about it then but had to back out after realizing it was going to cost quite a sum,” he said, explaining that his family would not have been able to afford the cost.

Victoria said he has long been devoted to the saints, especially Our Lady of Perpetual Help, whose shrine in Baclaran, Manila, was his refuge as a student at the University of Santo Tomas.

Canero said his sons, Noah and Nathan as well, prayers from his Couples for Christ community helped him on his journey,

The permanent deacons say they are finding their journey rewarding despite the challenge of balancing day jobs and family duties with church services and academics.

“The greatest triumph that has come along in my journey is having a better understanding of who I am and a desire to deepen my relationship with Jesus,” Deacon Canero said.