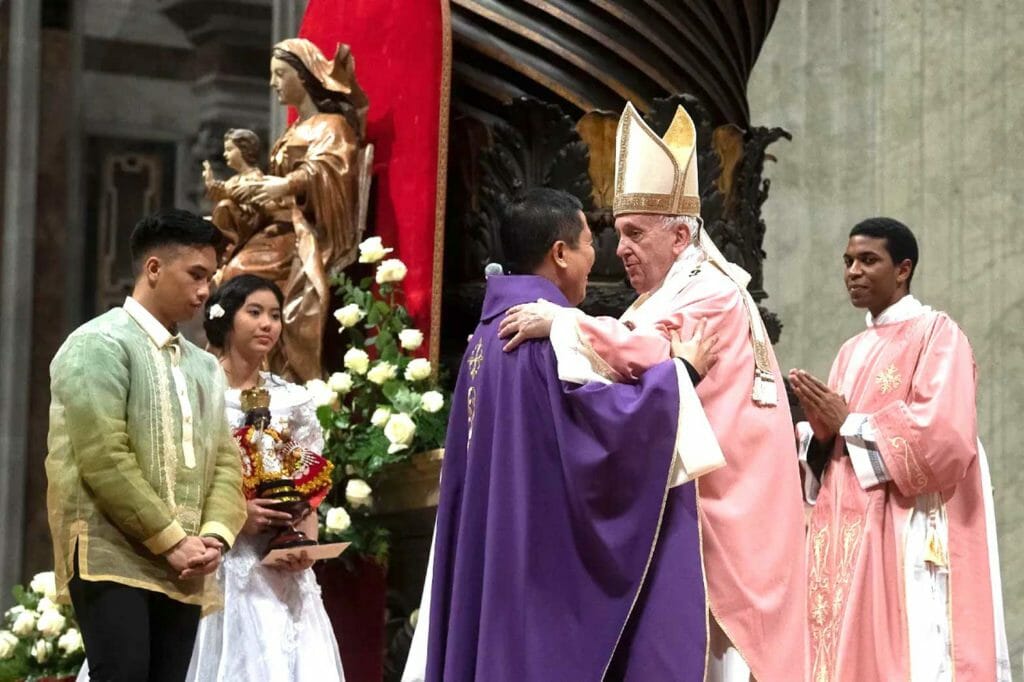 Pope Francis embraces Scalabrinian Father Ricky Gente, coordinator of the Catholic mission to Filipinos living in Rome, at the end of a Mass Dec. 15, 2019, in the Vatican’s St. Peter’s Basilica. The Mass was the first of the “Simbang Gabi,” a novena of nighttime or pre-dawn Masses in preparation for Christmas. (CNS photo/Vatican Media)

On December 15, 2019, during the pre-pandemic era, Pope Francis presided over a Simbang Gabi festive celebration at St. Peter’s Basilica in a historic first. For the first time, a Pope celebrated the uniquely Pinoy traditional Mass, telling the faithful to continue “to be smugglers of Faith.” His Holiness alluded to how millions of OFWs “smuggle” the Faith even to nations where it is not safe to be Christian.

“Thanks to the Filipino migrants,” concluded Pope Francis during his homily in Rome, “this devotion has crossed national borders and has arrived in many other states.”

On December 17, 2020, during the pandemic era, something wonderful occurred in the Islamic nation of Iraq. The government realized that the Christmas Season is the biggest annual event for humankind, when most global citizens are extraordinarily generous, loving, and kind. The Iraqi parliament approved a law to mark Christmas Day, December 25, as an official holiday across the country “on the occasion of the birth of Jesus,” formally announcing that Christmas is a national public holiday, walang pasok.

Also in the Middle East, the uniquely Filipino tradition of Simbang Gabi has attracted close to 10,000 people every night at St. Mary’s Catholic Church in Oud Metha in Dubai, the rich capital of an Islamic nation United Arab Emirates. In 2020, only a virtual Simbang Gabi was offered to believers as “part of our preventive measures against COVID-19,” Filipino Capuchin Fr. Chito Bartolo explained to the public.

Some American Catholic bishops have always acknowledged the value of Simbang Gabi, seeing it as a Filipino special gift to U.S. parishes during Yuletide Season. Every year, Churches in America come alive with Simbang Gabi, definitely a family-and-community-oriented nine-day spiritual rendezvous, a tradition that began in the Philippine Islands way back in 1669.

In December 2020, the Archdioceses of Los Angeles, New York, Chicago, and others in the United States, plus the dioceses in Calgary and Alberta and some cities in Canada halted the in-person novena Masses and kicked off a virtual Simbang Gabi.

Not just Simbang Gabi of 2020, but also the Traslacion in honor of Poong Nazareno was suspended. The world missed all festivals, street dancing parades related to Filipino Christian fiestas. Imagine when the grand ritual showdown of the Sinulog in the Philippines was canceled and people woke up that day in disbelief.

On October 2, 2021, the world silently passed the tragic milestone of 5,000,000 recorded deaths caused by Covid-19 and its variants. In the Philippines, Covid-19 has already killed more than 50,000 by the end of 2021. The pandemic, though temporary, has wrought a whirlwind of alterations that has affected us in the most despicable manner.

The persistently tenacious natural disasters such as a series of super-typhoons, earthquakes, and volcano eruptions did not challenge our Faith as much as how Covid-19 and its new variants did in 2020 and 2o21. The pandemic was unpleasantly different, cold, and unkind.

I have personally heard the respectful complaint: Why on the Jubilee Year of 2021 when we should have celebrated the 500 years of Christianity en grande? Why did God allow this national frustration to happen? Full stop. This Biblical passage was my only consolation: “After the wind there was an earthquake, but the Lord was not in the earthquake. After the earthquake came a fire, but the Lord was not in the fire. And after the fire came a gentle whisper” (1 Kings 19:11-13).

Our faith is our strength. Our faith reassures us that God never left but was ever present, resting in the frustrated Filipino soul during the most difficult times. Whispering. Caring.

December 2021 is different. The world brightens a bit because Simbang Gabi is back. Thanks be to God!