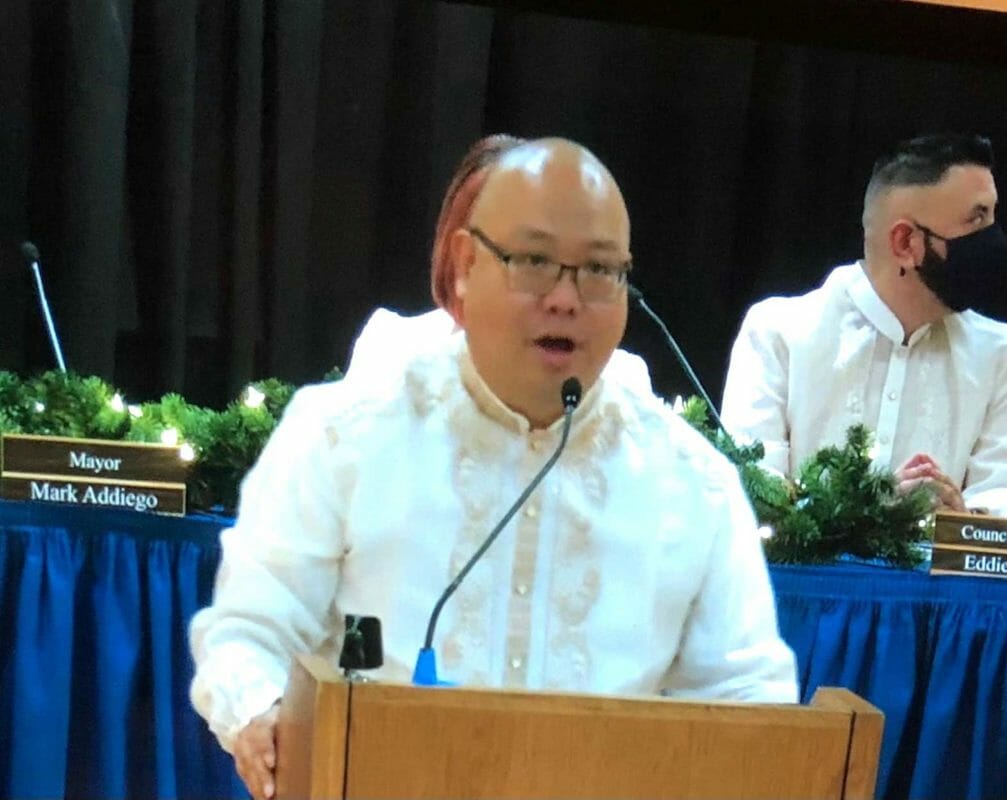 SOUTH SAN FRANCISCO, California  –  Filipino pride resonated Tuesday, Dec. 7, when two Filipino Americans again made history in their city and for their community.

Three years after they initially swore in as this city’s first-ever Council members of Philippine heritage, Mark Nagales and Flor Nicolas took their oath of office as Mayor and Vice Mayor of South San Francisco.

The ceremony unfolded like a Philippine festival, with every member of the city’s governing body – from the five-member City Council and the City Manager – all dressed in traditional barong Tagalog and terno, for the new vice mayor and lone female town executive.  The formal shirts were Nicolas’ gift to her peers.

There was no surprise when erstwhile town chief Mark Addiego opened nominations for his successor and Council Member Flor Nicolas lowered her face mask to declare it was her “honor and … pleasure” to nominate Nagales, the incumbent Vice Mayor, for the top seat.

The motion passed unanimously, and the Manila-born Nagales fulfilled his childhood dream anew. 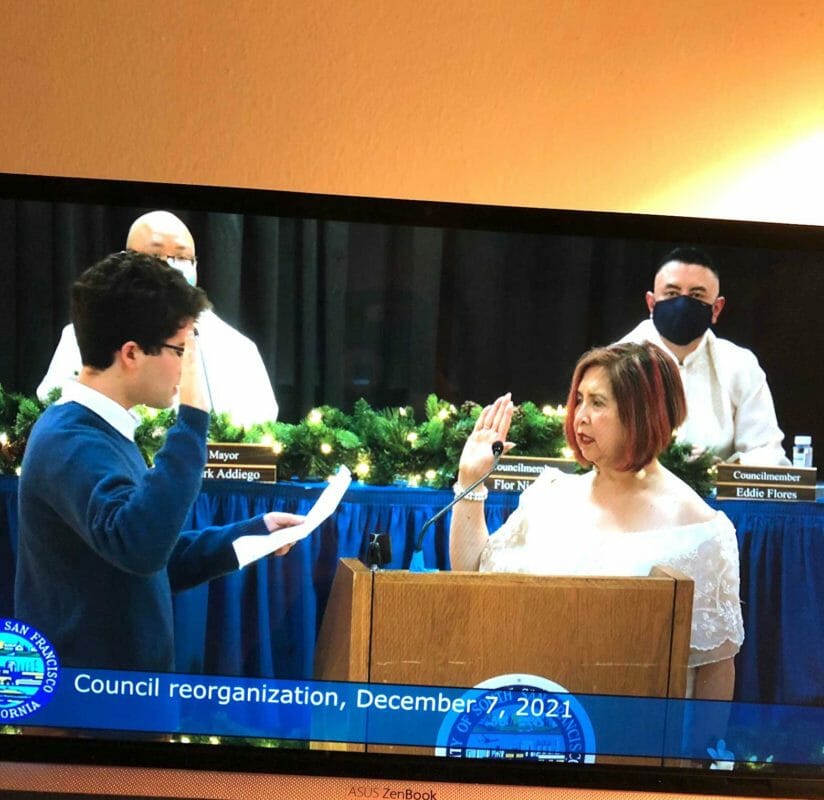 Vice Mayor Flor Nicolas’ empathy is informed by her experience as a new SSF resident 30 years ago. INQUIRER/CM Querol Moreno

“I would say being elected to the South San Francisco City Council has been my dream as long as I can remember. I wanted to serve my community and give back,” he told INQUIRER.net shortly before the installation rites.  As the “first Filipino to serve as Mayor, I hope there is a young person watching saying that ‘I can do that too.’ Representation matters and having a seat at the table matters.”

“COVID will be a major topic in what will be the new normal,” Mayor Nagales conceded as he shared his vision for his city during his administration.  Rather than focusing on the negative effects of the pandemic, however, he said his eye is set on “opportunities to do better.”

“Imagine a South City whose residents uplift their neighbors,” he reviewed some of his city’s notable achievements at the outset of crisis, such as providing financial assistance to families severely impacted by loss income when work or businesses abruptly shut down.

He noted how South San Francisco responded swiftly to ensuing social crises and pledged to continue to provide services equitable to all races, genders and ethnicities.

Nagales wants the city that has rebranded itself as the “Biotech Capital of the World” from “The Industrial City” to be the “model for other cities” in terms of closing the digital divide with free wifi in many high-traffic areas.

He sees provision of high quality affordable education and expressed excitement over the upcoming opening of the CalTrain station along Airport Boulevard that will give connectivity for the transit-oriented.  He also sees plenty of pedestrian-friendly space for families.

“Imagine a South San Francisco where anyone can afford to live,” instead of the current situation where a “family of four with an income of $146,000 cannot afford to live here.”

By day Nagales, who arrived in this country as a child with his parents ,Cesar and Virginia Nagales, coordinates community outreach for Project Sentinel, a nonprofit whose mission is to engender and promote fairness and equality of housing while advocating for peaceful resolution of tenant-landlord disputes.  His employment gives him a useful vantage point on a key issue particularly in San Mateo County, which has the highest housing values in the country.

“No incoming mayor is better prepared to navigate the world of politics which he has mastered,” Addiego observed.

Educated in South San Francisco public schools, Nagales was Inspired by his high school history and government teacher Gene Mullin to broaden understanding of how government works.  Nagales makes it a point torecognize his mentor, who passed away this year, for trusting him to join his Assembly staff when Mullin sought higher office after serving on the South San Francisco City Council.

Nagales’ political training culminated in his appointment to constituent services director at the Office of US 14thCongressional District Rep. Jackie Speier.  That 10-year employment concluded when he decided to seek elective office himself.  By then he recalls having bridged older adults and families to access services, recovering “over $5 million in veterans’ benefits” for district residents.

Predictably Speier, who two weeks ago announced her retirement from public office, virtually administered the oath of office for her former legislative aide from Washington, DC.  She said she was “thrilled” for the new mayor whom she said “right away already showed having outstanding qualities to be in a leadership role.”

In true Filipino fashion, Nagales swore in with wife, Aimee, and children, Aidan and Josephine, by his side.

Daly City Vice Mayor Rod Daus Magbual called the occasion “historic and powerful.” “Representation matters because it provides not only pride for our Filipino American community, but also for young Filipino Americans to see themselves in leadership when we have been historically underrepresented. Hopefully it encourages them to become more politically engaged and normalized practice for them to enter careers in civic duty.”

Nicolas’ potential as a city official had grabbed the attention of longtime Council members while she was “giving back” to the city that rallied around her and her family when they found themselves in challenging situations as newcomers from the Philippines.

“This moment was farthest from my thoughts 30 years ago,” said the new vice mayor, who is Vice-President and Head of Global Drug Safety and Pharmacovigilance at Rain Therapeutics. She immigrated with her husband, Nenar Nicolas, and their children, Genevieve and Elijah, in 1988 and immediately confronted adversity.  Barely had they settled in when Flor was diagnosed with cervical cancer.  A few months later, their house burned down while they were on family holiday in Chicago.

Their choice of a new home was influenced by the Catholic parochial school that welcomed their children in the middle of the school term.  What they ultimately found was a community that cared, where neighbors offered assistance and encouragement in time of need and cheers in moments of triumph.

“My family is not unique.  There are many families like ours – we try our best, we are resilient.  Like everyone else, we need acts of kindness and compassion (in hard times).  We need to think of others,” she said what was foremost on her mind as she assured her Council peers and the electorate “that I can be trusted” to do what they expect.

Nicolas astounding volunteer commitments. Besides her 20-year service at All Souls Catholic Church, she sat on the committee of the popular SSF Day in the Park, on the boards of the SSF Housing Authority and SSF Historic Preservation Commission as well as city and civic bodies.   She is a longtime booster for the SSF Police Activities League,  the Asian Alliance and Mater Dolorosa Catholic Church.

“I hope that we will continue to be a city proud of its diversity,” she had told INQUIRER.net when she was first elected.  She embraced her appointment by Addiego to chair the city’s Commission on Racial and Social Equity.

Nicolas walked proudly with some fellow elected officials and city managers in the peaceful vigil last year to promote understanding between the community and law enforcement.  Early this year she joined other City Council members speak up against anti-Asian hate crimes resulting from politically fueled COVID rhetoric.  In October her effort to honor her mentor Alice Bulos came to fruition when Westborough Community Center was named after the late leader, the city’s first tribute to a Fil-Am.

“I’m committed to the future of South San Francisco,” said Nicolas, who was proud to have her mother attend her oath-taking.

Nagales and Nicolas symbolize a shift in the leadership of South San Francisco, home to about 68,000 predominantly Asian followed by white and Latino residents.  With two Filipino Americans, foreign- born but experienced early in public service now holding the gavel, the near future looks promising for South City.