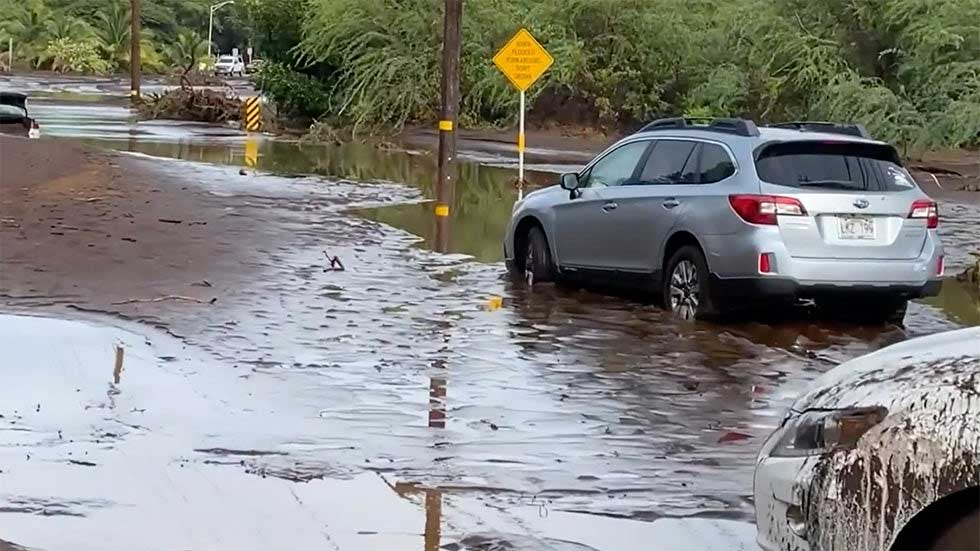 Hawaii expects more rainfall this week as flood watches have been called. SCREENSHOT

Hawaii prepared for more rainfall on Tuesday after the Pacific island chain was beset with torrential downpours that caused flooding, triggered landslide warnings and prompted the state to take emergency action.

“It’s a kind of a typical pattern for Hawaii that can produce heavy rain,” said meteorologist Bob Oravec of the NWS Weather Prediction Center in College Park, Maryland.

“It’s not something that happens, obviously, every day, but it can happen every year,” Oravec said.

The NWS issued a flash flood warning through Tuesday afternoon for Oahu, the most populous island, and Kauai, the western-most island. Each was expected to get another 2 to 4 inches (5 to 10 cm) of rain.

“Rain events of this size can cause catastrophic flooding and affect areas that do not usually flood,” the NWS said in a bulletin from his Honolulu office. “Numerous landslides are expected in areas with steep terrain.”

On Monday, the deluge prompted Governor David Ige to issue an emergency declaration that will remain in effect through Friday.

“The emergency declaration allows the state to use funds to support state and county efforts in providing quick and efficient relief of suffering, damage, and losses caused by flooding and other effects of heavy rains,” Ige said in a statement.

Five people were rescued on Monday night from a swollen stream near Oahu’s Pali Highway, the Honolulu Fire Department said in a statement.

Four shelters were set up in the capital city of Honolulu, the Oahu Department of Emergency Management said.

The state Department of Education said most schools were set to open on Tuesday, and there were very few power outages reported by PowerOutage.US, which collects data from across the country.

Most of the rain has already moved away from the eastern-most islands, the big island of Hawaii and Maui, and the system should clear out of the rest of the island chain by the end of Tuesday, the NWS said.