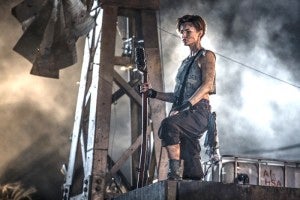 Alice (Milla Jovovich), the only survivor of the “Battle Of Washington“ against the zombies, must return to the place where the nightmare began, the hive, Raccoon City’. The Umbrella Corporation has consolidated it’s forces to conduct the final assault against the survivors of the Apocalypse.

“Resident Evil: The Final Chapter” is the sixth and final component of the franchise adapted from the immensely popular series of video games developed by Capcom. ‘The Franchise Resident Evil’, which has reported a billion dollars in earnings, is the adaptation of the most prosperous video game ever created. The desperate struggle of Alice to survive and hunt down those responsible for the virus that has transformed humanity into zombies is now etched in global popular culture. It’s time to discover the ultimate chapter of the adventure.

‘Resident Evil’ by Paul Anderson is the most popular video in the history of cinema. The Franchise in 14 years has amassed millions of faithful fans and forged a solid reputation through scenes of action and shock.

This film pays tribute to the incredible sceneries of the previous opus. Take the deserted streets of Washington where Alice seems to be the last human being on the planet. Alice takes the road to Raccoon City and is faced with various characters like Dr. Isaacs, agents of umbrella and several zombies. In “Resident Evil: The Final Chapter” Alice returns to Raccoon City’ cradle of the T-Virus. After a crushing defeat in Washington and the disappearance of her personal army, there remains the last chance to save humanity.

Alice gets in contact with a new group of survivors. Claire Redfield (Ali Larter) has had an accident and is now part of this ultimate group of survivors. She wants to believe in a better future and establish links with other human beings. Doc (Eoin Macken) is the leader of a small group of rebels near Raccoon City. He maintains a relationship with Claire but they barely manage to survive. The balance of the group is very precarious, because it’s the end of the world.

Michael (Fraser James), is Doc’s assistant. Most important for Michael is the protection of Doc because there’s a power struggle within the group. The relationship between the two men is crucial. Wesker (Shawn Roberts) returns in the role of the Director of Umbrella Corporation and is the main antagonist in the film. Wesker still aspires to take control of the world and to get rid of the humanity, which seems to be the poison of this planet; that’s his ultimate goal. Wesker is accompanied by evil Dr. Isaacs (Iain Glen). Everyone loves to hate a good nasty. Isaacs is very affable and demonstrates the spirit of Machiavellism. His medical experiments and scientists have enabled him to become almost invincible. Isaacs is an egocentric who wants to take the power. He’s going to use Alice to achieve this. But his plan is turned against him because the young woman has a goodness and thirst for justice that he has not anticipated.

“Resident Evil: The Final Chapter” has impressive hordes of zombies and other ‘Living Dead’. The franchise has a reputation for having created some of the most original and terrifying creatures ever seen on the big screen. It’s a mix of style and action. “Resident Evil: The Final Chapter” brings together characters, cults and new faces. It’s not necessary to be a fan of the game to enjoy the movie versions. The evil and powerful Umbrella Corporation is fantastically wicked because its undertaking is quite credible in modern world. Alice is an exceptional character because she’s able to defend herself. She’s very independent and strong, a real source of inspiration.

The different twists in the film allow fans to trace the origins of the T-Virus. One of the main strengths of the franchise is unquestionably Milla Jovovich, who resumed the role of Alice for the sixth and last time. Over the course of the series, she has overcome seemingly insurmountable challenges and survived the onslaught of the obscure Umbrella Corporation for the ultimate healing of humanity. The ultimate scene of the film allows you to understand everything.