Simbang Gabi, a Filipino Christmas gift to US parishes

Simbang Gabi, a Filipino Christmas gift to US parishes 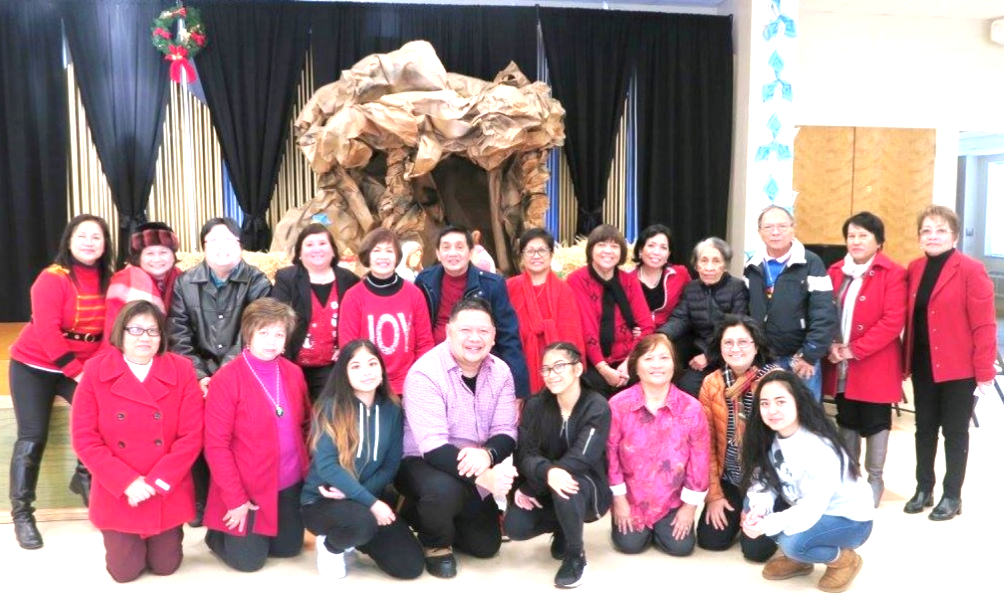 Simbang Gabi attendees at the Parish of Our lady of Good Counsel (OLGC) in San Leandro, California, have held their masses at night since 2001. CONTRIBUTED

OAKLAND, California — Filipinos abroad, including U.S.-based ones, miss a lot of things aside from back home, especially during Christmas season.

Despite having stayed a long time in their adopted countries, they’re still fond of their native customs and traditions, especially the ones related to Christmas.

Even in the States Filipinos display the Nativity or the Belen, the native Parol or Lantern in their homes, and most of parishes with large Filipino congregations observe the Simbang Gabi or dawn masses.

Fr. Geoffrey Baraan, longtime Roman Catholic priest in the San Francisco Bay Area, who is the pastor of St. Joseph Church in Pinole, California, believes that many Catholic parishes the United States regard Simbang Gabi as a wonderful gift from Filipinos to US parishes.

Filipino communities have their own Simbang Gabi observed even having their own Filipino ways of attracting their attendees to the masses, including fellowship meals after the sacraments are done, the singing of Filipino Christmas carols, or caroling, and traditional gift-giving, among others.

Simbang Gabi has become an important practice in the Catholic Diocese of Oakland ever since it was started six years ago. A special mass is held a few days before the start of the nine-day novena at nearly a hundred parishes in the diocese of Oakland. 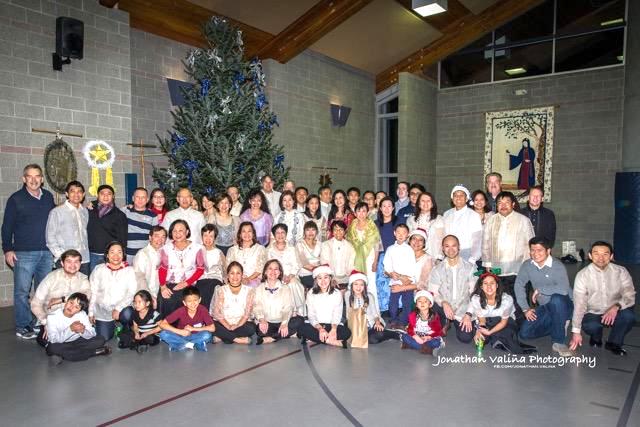 Simbang Gabi-goers at the Parish of Mary Queen of Peace in Sammamish, Washington, are treated after mass to a short program. CONTRIBUTED

In Baraan’s estimate, almost 50 percent of all parishes in the diocese hold Simbang Gabi attended not just by Filipinos, but also by non-Filipinos.

“The non-Filipinos regard it as wonderful, very challenging preparation for Christmas, the birth of Christ. They have a different and inspiring feeling of sacrifice that the mass attendees make to wake up very early in the morning to be there,” Baraan noted.

He believes that parishes should “hold their own Simbang Gabi to encourage continuity of attendance of parishioners,” as opposed to a rotation of parishes as venue, which makes it harder for parishioners to continue with the nine-day novena.

Baraan’s parishioners also indicated their overwhelming preference for holding the Simbang Gabi at dawn rather at nighttime, to instill the sense of sacrifice.

Baraan has been moved to give his parishioners some ten to fifteen token gifts every dawn mass and a special major prize at the end of the nine-day practice.

“That makes the attendance very exciting and the mass itself different. Free tickets were distributed before the mass so there is no need to spend to participate. I always think of something exciting, something different to offer attendees of the early morning mass,” Baraan explained.

“The whole image of the light in darkness illuminating hope in times of despair, the symbol of light is very appropriat and meaningful. If there is something different and so powerful, it is that Christ is the light that we look for in darkness. That is why we have this Simbang Gabi in preparation for the coming of the Jesus Christ, the light.”

The Parish of Our Lady of Good Counsel (OLGC) in San Leandro, California, has been holding its masses at night since 2001. 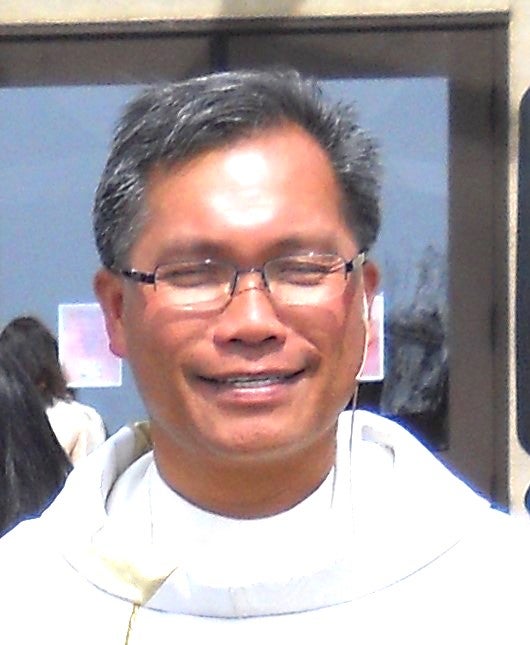 Fr. Geoffrey Baraan, longtime Roman Catholic priest in the Bay Area who is the pastor of St. Joseph in Pinole, California says Simbang Gabi is “a unique and noble Filipino tradition for the coming of the Jesus Christ, the light.” INQUIRER/Jun Nucum

OLGC Simbang Gabi overall coordinator Melania Daulog disclosed that it is the preference of the youth parishioners, besides giving those who cannot make it to the dawn masses the chance to still practice the Filipino tradition.

“If after parishes hold breakfast after the morning mass, dinner is also served after the mass here at OLGC. The food is mostly Filipino dishes that we are used to eating. Many parishioners and organizations volunteer to become sponsors of the dinner.  And after dinner we have musical entertainment where even priests sing. Some have been here as volunteers apart from being attendees for around ten years already,” reported Daulog.

She said they do not need to inform parishioners of the annual tradition as the turnout even increases every year. She notes that the masses have become a rare opportunity for reunions and fellowships among busy relatives and friends. Mexicans and Portuguese who are curious have become part of the estimated 350 to 500 attendees nightly.

In the state of Washington, parishioners Vina Guytingco Anderson, Raquel Nosce, Jess Cabellon and Lilwyn Lucas-Dyer say they hew to Filipino tradition as much as possible in their Simbang Gabi.

Based in the Parish of Mary Queen of Peace in Sammamish, Washington, Anderson said that they have been holding the masses since 1998: “It is important that we carry the tradition and continue to teach and show our children and children’s children the Filipino values and traditions of our church and culture.”

Lucas-Dyer added that the “Simbang Gabi is held in nine different churches at 6 p.m. with dinner and singing of Filipino Christmas carols or caroling held after. What makes ours unique is that those who go around for offertory wear our colorful and elegant-looking Filipiniana dresses. Non-Filipino parishioners also join us in the choir as official members.” 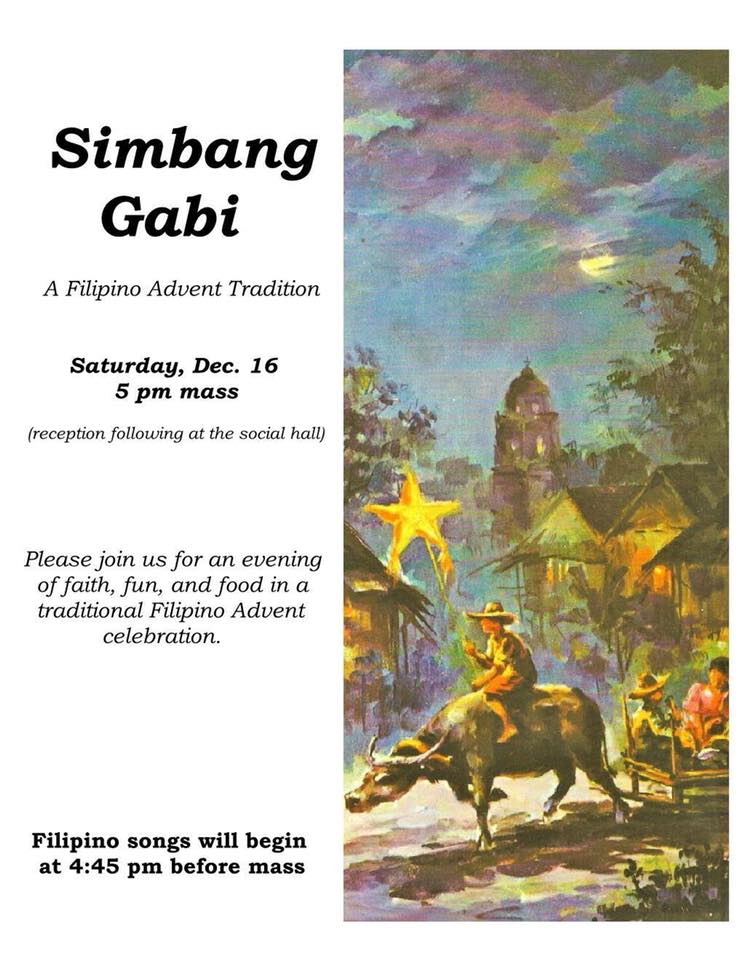 A sample invitation announcing Simbang Gabi in chosen churches in the Diocese of Seattle Washington. CONTRIBUTED

Parish participation is not chosen but voluntary.  St. James Cathedral in Seattle is the home of the Archdiocese of Seattle. Every year, it holds a Commissioning Mass to celebrate the start of the Simbang Gabi celebration in the city. It is a big event, with hundreds of Filipinos and non-Filipinos attending.

“For this year’s Simbang Gabi celebration in the Archdiocese of Seattle, 60 parishes are participating, from the Cascades to the Olympic Peninsula to Tacoma and all the way to the Canadian border, as well as the Seattle Metropolitan area,” Nosce reported.

Cabellon noted, “It is wonderful to see so many Filipino Americans embrace their culture, and likewise, wonderful to see other nationalities participate and attend our Advent celebration.” Attendance has risen continuously since the practice started 19 years ago. Anderson reasoned that most parishes adopt an evening mass to encourage more people to participate, it being the most convenient time after coming from work.

“Each parish is unique its own celebration. The celebration in the Mary Queen of Peace begins with a choir singing 4-5 Filipino songs at the church,” said Anderson. “There is a procession of parols before mass. The second reading at mass is done in Tagalog, and a number of songs during mass are in Tagalog.”

Anderson added: “We host a reception afterwards with the parish contributing a monetary amount, and many donations are brought in from the Filipino parishioners each year for adobo, pancit, lumpia, arroz caldo and ham. We host a small program, that includes a slide show of Filipino scenes, mostly of Christmas in the Philippines, a lot of singing and caroling, in both English and Tagalog. Sometimes we do one or two native dances like Tinikling.”

“The Simbang Gabi tradition here in the US is as close to the Filipino Simbang Gabi as possible for some parishes also serve puto bumbong, bibingka, mainit na salabat, tuyo pritong itlog, sinangag, among others,” Baraan noted. “Somehow homesickness especially during Christmas season may be alleviated by this practice of hewing to the Simbang Gabi tradition in the Philippines as much as possible. To the others, however, the practice makes them even more homesick.”