The Biden administration was blocked on Tuesday from enforcing two vaccine mandates requiring millions of American workers to get vaccinated against COVID-19, a key part of its strategy for controlling the spread of the coronavirus.

Doughty’s ruling applied nationwide, except in 10 states where the CMS was already prevented from enforcing the rule due to a prior order from a federal judge in St. Louis.

Doughty said the CMS lacked the authority to issue a vaccine mandate that would require more than 2 million unvaccinated healthcare workers to get a coronavirus shot. 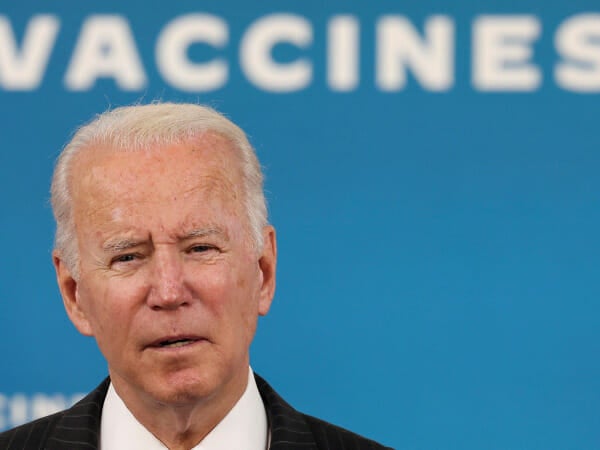 U.S. President Joe Biden delivers remarks on the authorization of the coronavirus disease (COVID-19) vaccine for kids ages 5 to 11, during a speech in the Eisenhower Executive Office Building’s South Court Auditorium at the White House in Washington, U.S., November 3, 2021. REUTERS/Evelyn Hockstein

“There is no question that mandating a vaccine to 10.3 million healthcare workers is something that should be done by Congress, not a government agency,” wrote Doughty.

Separately, U.S. District Judge Gregory Van Tatenhove in Frankfort, Kentucky, blocked the administration from enforcing a regulation that new government contracts must include clauses requiring that contractors’ employees get vaccinated.

The contractor ruling applied in the three states that had filed the lawsuit, Kentucky, Ohio and Tennessee, one of at least 13 legal challenges nationwide against the regulation. It appears to be the first ruling against the contractor vaccine mandate.

The legal setbacks for President Joe Biden’s vaccine policy come as concerns that the Omicron coronavirus variant could trigger a new wave of infections and curtail travel and economic activity across the globe.

Biden unveiled regulations in September to increase the U.S. adult vaccination rate beyond the current 71% as a way of fighting the pandemic, which has killed more than 750,000 Americans and weighed on the economy.

Tuesday’s rulings add to a string of court losses for the Biden administration over its COVID-19 policies.

The most sweeping regulation, a workplace vaccine-or-testing mandate for businesses with at least 100 employees, was temporarily blocked by a federal appeals court in early November.

MOST READ
usa A Beginner’s Guide to Buying a Vacuum Cleaner in 2022
usa Filipino’s mansion selling for $25M, the priciest in Orlando, Florida
usa Dangers of Baby Sleep Products: New law bans those that have caused infant deaths
usa Beloved Fil-Am restaurant co-owner shot dead in Oakland
usa U.S. guided-missile destroyer to be named after hero Telesforo Trinidad
usa Four resilient SF Bay Area Filipino restaurateurs honored
usa Flying Saucers: What We Know of UAPs and UFOs
DID YOU KNOW?
A Beginner’s Guide to Buying a Vacuum Cleaner in 2022
Island Hopping in Tulum: The 12 Best All-Inclusive Tulum Resorts
How to Dispute a Debt and Win | Simple Tactics
The 12 Best Lat Exercises for Muscle Growth
Countdown to summer: tips for learning how to surf
User Guide: How to Track a Lost iPhone